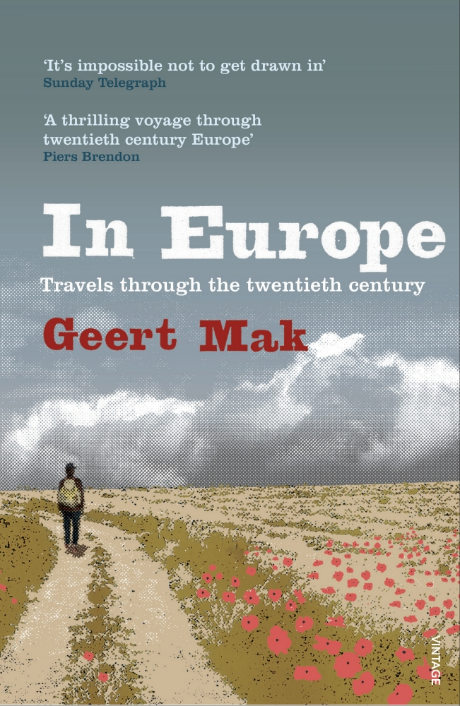 From IN EUROPE by Geert Mak, translated by Sam Garrett

The European project is a unique one in history. It is not an empire, it is not a federation, it is something all its own, just as new and unprecedented as the Republic of Seven United Netherlands was in the seventeenth century. And it will require a great deal of time: such integration processes are not to be thought of in terms of years, but of generations. History, however, also shows us that such projects are not doomed.

In the nineteenth century, a large part of the French population spoke no French at all, and the fact that they were Frenchmen and Frenchwomen did not interest them one whit. The only identity they recognised was that of their village, their city and sometimes their region. On occasion, that identity was defended by force of arms, as in the Pyrenees, the Ariège and, even today, in Corsica. Yet France still entered the First World War as a nation. Not due to speeches or clever PR techniques, but above all thanks to the building of countless railways and roads, the construction of thousands of schools and, last but not least, thanks to its system of military conscription.

When the Dutch students Jacob van Lennep and Dirk van Hogendorp went walking through their newly formed fatherland in 1823, different currencies were still circulating everywhere. In the midst of what is today Zeeland Province they encountered passport problems, the country’s political life usually came no further than the local men’s club, and the two were often unable to make themselves understood amid all the strange local dialects. By that time the Netherlands had already been a constitutional federation for some 250 years, but it was only in the course of the nineteenth century that something like a ‘conceptual community’ arose at the national level.

In 1831-2, the French aristocrat Alexis de Tocqueville travelled through the United States. Upon his return, he published a collection of journal entries and notes on this new nation under the title De la démocratie en Amérique. It was to become a seminal historical document about rights, democracy, nation-building and, above all, about the common mentality of the Americans. But, even today, it also shows the enormous differences between that nascent Unites States and today’s European project.

Everything de Tocqueville took note of almost 200 years ago in that young America – the single language, the public’s great interest in the new forms of government, a clear consensus on the roles of the various parts of government, a strong sense of democratic legitimacy, a system of simple but solid rules of play between the various powers – everything that unified the United States then can hardly be found in the Europe currently under construction. If only for that reason, the use of the word ‘constitution’ during the 2005 referendums was misleading: the complicated system of treaties with which the old European states bind themselves together in no way resembles the clear lines which the Founding Fathers were able to impose on their new world in the Philadelphia of 1787.

It has been notes often enough before: the view European have of Europe is a – usually unconscious – projection of the idea they have of their own society. For the Germans, Europe will become one big Germany, for the Poles one great Poland, and the Dutch bravely continue to see Europe as being just as orderly and compromise-oriented as themselves. The problem is that all this leads to an endless flow of conflicts and misunderstandings.

For there is no European people. There is no single, all-embracing community of culture and tradition that binds together Jorwerd, Vásárosbéc and Kefallonia; there are at least four of them: the Northern-Protestant, the Latin-Catholic, the Greek-Orthodox and Muslim-Ottoman. There is no single language, but dozens of them. The Italians feel very differently about the word ‘state’ than do the Swedes. There is still no truly European political parties, and pan-European newspapers and television stations still lead a marginal existence. And, above all: in Europe there is very little in the way of a shared historical experience.

Almost every country I travelled through myself, for example, had come up with its own account of the unimaginable explosion of violence between 1939-1945, its own myth to explain all the unbelievable madness, to justify wrongdoings, to bury humiliations and create new heroes. The British compensated for the loss of empire with the myth of the Blitz. From the shame of Vichy, the French constructed the glorious story of General de Gaulle and the Resistance. The Soviets came to terms with Stalin’s unnameable waste of human lives through the story of the Great Patriotic War. The Germans explained their dearth of morale during the Nazi era – the Nazis were always ‘the other people’ – with the legend of Hitler as ‘the evil demon’.

All these mollifying, explanatory, comforting myths cannot exist without a national context. People need stories in order to grasp the inexplicable, to cope with their fate. The individual nation, with its common language and shared imagery, can always forge those personal experiences into one, great, cohesive story. But Europe cannot do that. Unlike the United States, it still has no common story.

Journalist and historian Geert Mak was born in 1946. His father served as a Protestant clergyman in the Dutch province of Friesland; the family also lived for a time on the Indonesian island of Sumatra. Mak started in Amsterdam as editor of a the weekly De Groene Amsterdammer, worked for years at the foreign desk of the VPRO broadcasting company and as city-reporter of the NRC Handelsblad daily. As from 1992 he has dedicated himself increasingly to the writing of books. With Jorwert, The Biography of a Village, Amsterdam, A Brief Life of the City and The Century of my Father he became one of the most successful authors of the Netherlands.  In Europe, his voyage through the continent and through the twentieth-century Europe, became also in the rest of Europe a classic. In his recent work In America, travels with John Steinbeck, Mak retraces John Steinbeck’s footsteps through his voyage across America. At this very moment Mak is writing his new book about the life of Jan Six, a patrician living in the 17th century.

For his translations of some 30 novels and works of non-fiction, Sam Garrett (b. Harrisburg, PA, 1956) has won prizes and appeared on shortlists for some of the world’s most prestigious literary awards. Garrett is the only translator to have twice won the British Society of Authors’ Vondel Prize for Dutch-English translation (in 2003 and again in 2009). In 2012, his translation of The Dinner by Herman Koch spent two months on the New York Times bestseller list and became the most popular Dutch novel ever translated into English. Garrett’s translation of Tim Krabbe’s The Rider is considered a cycling cult classic. Other of his works have been shortlisted for the International IMPAC Dublin Literary Award (2005 and 2013), the Oxford-Weidenfeld Translation Award (2010), the PEN Translation Prize (2014) and the Best Translated Book Award (2014). He divides his time between Amsterdam and the French Pyrenees.

Geert Mak is one of five European speakers/writers who will talk Europe with Rosie Goldsmith during our Culture Matters – The *Euro Stars* Debate on 27 April at Europe House.

Thank you to the author and publisher Vintage (Penguin) for allowing us to publish this excerpt.