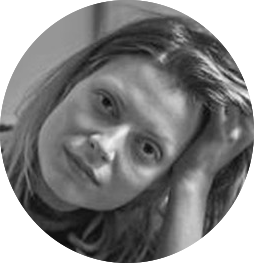 From THE EASINESS AND THE LONELINESS by Asta Olivia Nordenhof, translated by Susanna Nied

i saw my brother sitting close to me across from

his throat and part of his shoulder. seriously

oh yeah it was stormy, i had running shoes on

thought about sitting in his bed

from there seeing him in his kitchen his back to me

cutting a tomato in two

or a bigger fruit or a cucumber

i: sitting in his bed on the edge of the bed

outside the apartment a person goes by, mute in the storm

silently silently over the skin

he divides the fruit in two

before the meal in a valley between hills this town

its not his breath im hearing

from the kitchen the ultimate sigh, the skin triumphs

outside the apartment a person goes by, ignorant of the scene

the inviolability of this tomato, whether or not its whole: without meaning and silent

on the cutting board still for thought

THE EASINESS AND THE LONELINESS

Asta Olivia Nordenhof (b. 1988) debuted in 2011 with her novel Et ansigt til Emily. She is a graduate of the School of Authors in Copenhagen, and was awarded the 2013 Montanas Literature Prize for her poetry collection Det nemme og det ensomme (“The Easiness and the Loneliness”).

Susanna Nied is an American writer and translator. She has been honored with the Landon Translation Award of the Academy of American Poets (2007) and has twice been named a finalist for the PEN Award for Poetry in Translation (2005, 2012). Her translations of Danish poet Inger Christensen are published by New Directions.