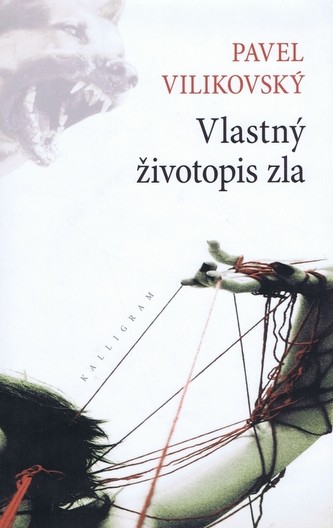 From THE AUTOBIOGRAPHY OF EVIL by Pavel Vilikovský, translated by Julia and Peter Sherwood

Part I:  The Brief and Extreme Loneliness of Jozef K

Let’s call him Karsten, it’s one of those stupid, unreal sounding names. The two drubbers or hand rubbers, who circled around Karsten, rubbing their hands as if itching to have a go, they were not interesting. They were just two mad Frankensteins anticipating the pleasure of what they were about to create with their own hands. That’s how they referred to him, too – as if he wasn’t there yet, as if their intervention was needed to bring him to life. Karsten expected one of them to be the goodie and the other the baddie but both of them looked like baddies. Although it wasn’t really their fault that they weren’t interesting. There was nothing Karsten would have found interesting at this stage. The only thing that was left was a subconscious, mechanical curiosity of the senses, registering how scuffed and battered the big yellow desk was, and the leak patches on the wall. But that, too, he just saw rather than thought.

He wanted them to start beating him. Not because he couldn’t stand the waiting; he actually liked the idea. That was the kind of state he was in. It was the freedom of pure desperation, a black freedom, and all that was needed to make it complete was the drubbing. He was ready to be sick all over himself after the first blow, and the thought made him smile. After all, nothing was at stake. He was not worried that he might give away anything they didn’t already know. If they had managed to lure him out of a quiet remote village in Austria into Vienna’s Russian zone and had no trouble spiriting him across the border, they already knew much more than he did. And by this he meant not just assorted conspiratorial nonsense. How much could those primitive thugs know about the world? But obviously they did know more, since they possessed the ultimate knowledge and made Karsten realise what the world really was about: the world was God’s unthinking spit.

At this point the third man entered and as soon as he did so, Karsten knew he was the goodie. The dangerous one. He was prepared for him, but what use was that when he was not prepared for himself?

He didn’t know or notice if the man gave the two thugs some sort of signal, but in a second they vanished without a word. He didn’t notice until he heard the door slam, and he suddenly felt mindlessly grateful to the man. As if your coat got smudged with wall paint and a stranger dusted it off for you.

The man stopped in the middle of the room, right beneath the lamp. The light picked out a thin face with two long crevices along the cheeks and made his nose cast a long shadow, as if a second mouth had opened up in his skull.

‘Well, then, welcome home,’ he said. Another shadow, this time a smile, appeared on his face. He reached into his jacket pocket – he was wearing a creased grey suit with an open-collar shirt – and took out a packet of cigarettes. Now he’s going to offer me one, thought Karsten, and indeed, without saying a word, the man thrust the box towards him across the desk. Karsten, the defiant and incorruptible, was determined to turn down the cigarette. But that was his head talking; his hand reached for it.

From THE AUTOBIOGRAPHY OF EVIL

Pavel Vilikovský is one of the most distinguished and internationally acclaimed contemporary Slovak writers, two-time recipient of Slovakia’s most prestigious literary prize Anasoft Litera. He is the author of over twenty books of which only two – Evergreen is… (trans. Charles Sabatos) and Fleeting Snow (trans. Julia and Peter Sherwood) – have been translated into English so far. Vlastný životopis zla (‘The Autobiography of Evil’) was published in 2009.

Julia and Peter Sherwood are based in London and work as freelance translators from and into a number of Central and East European languages. JuliaSherwood was born and grew up in Bratislava, Slovakia, and spent more than twenty years in the NGO sector in London before turning to freelance translation some ten years ago. She is Asymptote’s editor-at-large for Slovakia. Peter Sherwood’s first translations from the Hungarian appeared fifty years ago, but he was an academic for over forty years before retiring and devoting himself more or less full-time to translating. Their joint book-length translations into English include works by Balla, Daniela Kapitáňová, Uršuľa Kovalyk, Peter Krištúfek (from the Slovak), Hubert Klimko-Dobrzaniecki (Polish), and Petra Procházková (Czech). Peter’s translations from the Hungarian include works by Béla Hamvas, Noémi Szécsi, Antal Szerb, and Miklós Vámos.