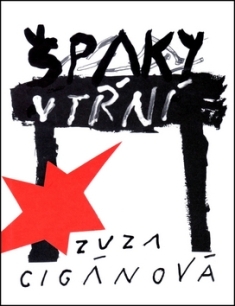 From CIGARETTE BUTTS IN THE BRAMBLES by Zuzana Cigánová, translated by Magdalena Mullek

She got caught up in a conversation by the dumpsters. With an older, but better-looking woman than herself. They each took out the trash with similar frequency, so Pipina thought she also lived alone. She was hobbling. So Pipina said hello, a little help would be nice, wouldn’t it … Men?? Trash?? Take out?? Resounded clearly, unequivocally, harshly. Don’t be naïve! It sounded as uncompromising as a statement from a podium. The most important thing is not to ask them for anything! Especially not anything tangible. They get scared shitless. The dumpster has an echo. They feel threatened. Their guard goes up – her words carried through the neighbourhood. They don’t even know why yet, but they’re already afraid! That you may end up needing something. Something specific, specifically from them! The woman was obviously just getting started. Most importantly, not in the near future! Tomorrow? You can’t be serious! Today? That would send them over the edge! They’re lazy as lice. You want a mosquito net? He got so sad. And that was right after we had fallen in love. You have to take care of, figure out, and arrange everything yourself while maintaining the appearance that you’re lost without him, and then he’ll forgive you anything, even being flat chested … If his comfort becomes as sacred to you as it is to him, plus some good home cooking, he won’t ever leave you, not even for a fifteen-year-old. That’s what you should keep in mind instead of rifling through their pockets and their cellphones. You may not cook like mommy, but you also don’t nag him the way she does. I once told him that, but now he thinks it’s his own opinion. He didn’t notice I had managed to get ahold of a mosquito net and put it up. He just knows he’s comfy: Have you noticed there are no mosquitoes in our house? And of course, once in a while you’ve got to give him some. And pretend it’s the one thing you’ve been waiting for. That it’s the only thing you expect out of life. Then the neighbour hobbled away. She fell. She tied something somewhere … And you have to tell the kids, daddy’s home. Nothing bad can happen to us now, he’s hooome … But psst, don’t bother him, he’s watching the news … the wind carried away her words … And Pipina laughed all the way to her kitchen. She knew that in those ten minutes she had gotten a PhD in marriage, but she didn’t heed the advice and asked him to take out the trash. It reeked, and it was late, and she couldn’t get the baby to sleep … She wasn’t sure he had heard her, but all of a sudden he felt awkward. It reeked in there, and Pipina had her hands full. He thought about his mother, who used to take out the trash in the morning when she went to pick up the groceries, it was automatic. I should drop by my mother’s. He got up, I have a strange feeling she may need something. You know, she’s all alone, and he was gone … She didn’t even have time to tell him, if you’re heading out, could you please…

Translated from the Slovak by Magdalena Mullek

An excerpt from Cigarette Butts in the Brambles

Zuzana Cigánová is an actress and a writer.  In addition to her stage performances, she has been in over two hundred television productions and in more than a dozen feature films.  Three of her books – Šampanské, káva, pivo (Champagne, Coffee, Beer), Špaky v tŕní (Cigarette Butts in the Brambles), and Aksál – were shortlisted for the Anasoft Litera prize.

Magdalena Mullek is an independent literary translator and scholar. She holds a PhD in Slavic Languages and Literatures from Indiana University. Her translations from the Slovak have appeared in TWO LINES, Words Without Borders, Slovak Literary Review, B O D Y, and other journals. Her recent publications include The Dedalus Book of Slovak Literature (Dedalus Books, 2015), Into the Spotlight: New Writing from Slovakia (Three String Books, 2017), and the children’s book The Escape by Marek Vadas (BRaK, 2018). Magdalena lives with her husband and their daughter in Orlando, Florida; Puerto Vallarta, Mexico; and Poprad, Slovakia.