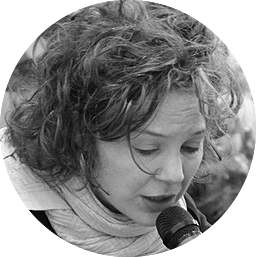 Set in the 1990s, against the backdrop of the Yugoslav Wars, this clever and intriguing novel explores the impact of war and celebrates the beauty of language. The protagonist, a young boy named Zoli, adores wordplay and crossword puzzles, and spends most of his time in the garden tending his flowers. When his parents enlist him in the army to toughen him up, Zoli is forced into a brutal new life for which he is wholly unprepared. Melinda Nadj Abonji’s second novel is utterly compelling and unique, her masterful use of language and vivid imagery a treat for any reader.

They say I fell off the motorbike that day just like a sack of potatoes, my father rode on without me, took him ages to notice there was no one behind him, I was lying in the road, fresh bread in my satchel

my father came riding back, I heard him clearly even though I was unconscious, as they all said later, my father came back into my world, which was orange, red, turquoise and purple, there were flowers in every corner and along every border of my world, and these flowers smelled like bread, like the white bread that lay next to me in the dust, and I heard my father calling my name, I heard his voice, it sputtered over the flowers, shook me by the shoulder, Zoli, Zoli! and I sent my papa a plague of locusts, whistling mice that would make his knees knock, I called the neighbour’s dog to come and lick his calves – he hates that so much – there’s nothing I didn’t wish on him to make him leave me in peace

why would he do that? well I’ll tell you, if you’re patient, and of course you are, papa tugged on my earlobes, son, get up, it’s plum dumpling day today, remember? and there was another voice as well as papa’s, and this voice hissed, sent my flowers spinning, your boy is bleeding, look, here, his head! quick, we need to call a doctor!

I must say I knew then where my flowers came from, when the whispering voice said I was bleeding I knew straight away that my flowers were growing out of the blood, yes, out of the bleeding hole in my head, and I swear on my life I’ve never seen such beautiful flowers, they weren’t carnations or roses, nor irises or gerberas, tulips or even begonias, they weren’t flowers at all, they were birds’ heads, oh no, I’m not making this up, I’d have to say they were bunting heads, shaped like flowers, but they weren’t brown, weren’t bland or banal like buntings are, instead, behind my eyelids the buntings gleamed a colour red that exists only in our imaginations, in the shape of flowers

but they dragged me from my paradise garden, a garlic-doctor pumped me up with his air, patted me, took my wrist, he lifted my eyelids as though he could see something there in my eyeballs, yes, yes, the warped world, and then they heaved me onto a vehicle, he’s heavier than he looks, they said, all these hands around me, all this sweating from the exertion, just let me lie down, why can no one hear me? so much fuss, they all kept talking at me, leave me alone, I screamed, but no one, no one heard me, and my flowerbirds grew smaller and smaller, thinner, and once the red was all washed out again they flew away, because of the raised, crazed voices, they left me behind, and that, that is the reason I cried as I opened my eyes, look, he’s crying, said the doctor, the nurse, and my father’s face appeared above me, son, you’re bawling like a baby, and us? we’re sick with worry, and my father smacked a kiss on my skin, where’s my bread?

they all gawped at me, he’s asking for his bread, listen to him, he wants to know where his bread is

and at that moment, that’s when I jumped up, grabbed the doctor by his coat collar, puked my words on his white righteousness, disturbed his perfectly parted hair with my rage, and I screamed, told them why I’d cried, that because of them, my flowers … the birds … and my colours … and I was lying in the gold dust …and the doctor’s help, which stinks of money, which he spirits away in his coat pocket …

and my papa gapes at me, Zoli, is that you, it can’t be you, you’ve never talked like that before, Zoli, what is this devil inside you …

-P-L-U-M-D-U-M-P-L-I-N-G-D-A-Y- oh yes, the day we get to eat plum dumplings, usually on a Friday, I love to free the plums from their doughy potato coats, to take the plums, still hot, almost too hot, and make them vanish into my mouth, and I can easily eat seven to ten dumplings, every time.

Melinda Nadj Abonji was born in Becsej, Serbia. She and her family moved to Switzerland at the beginning of the 1970s. She lives in Zürich, where she works as a writer and musician. In 2010, her novel Tauben fliegen auf (‘Fly Away, Pigeon’) won both the German and Swiss Book Prizes.

Alyson Coombes holds a BA in French and German and an MA in Literary Translation. In 2015, she took part in the Emerging Translators Programme run by New Books in German, and was translator-in-residence at the Crossing Border Festival in The Hague. Her co-translation of Nagars Nacht by Astrid Dehe and Achim Engstler was published as Eichmann’s Executioner in July 2017 by The New Press.