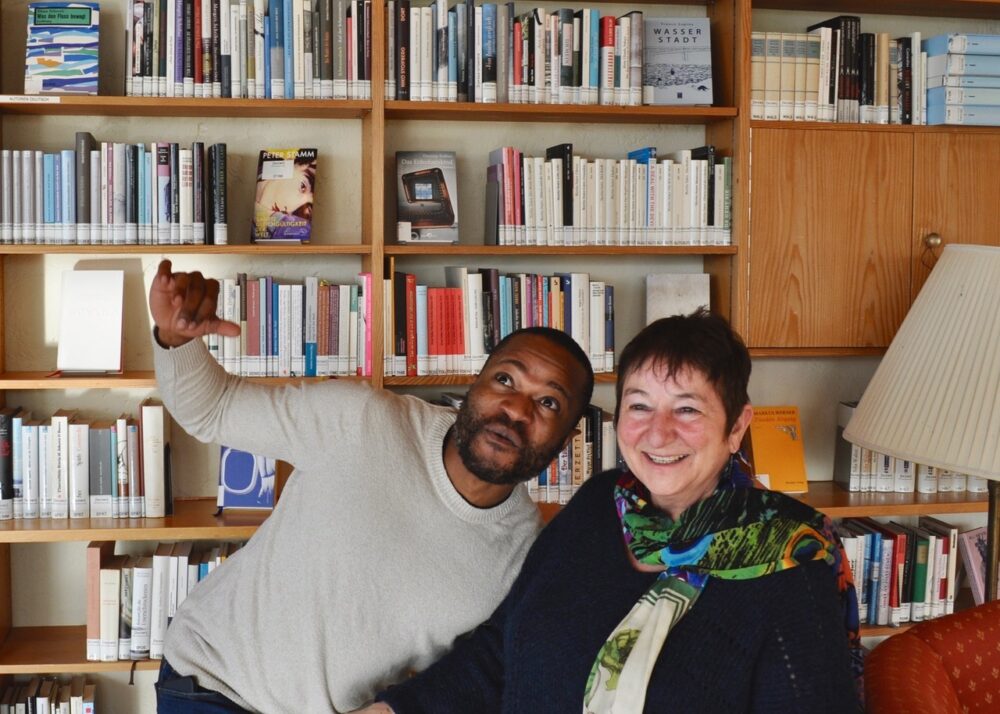 This is a phrase from Camfranglais, a mixture of French, English, Pidgin and borrowings from local languages. How do you translate a phrase that is already partly in English into English? This is only one of several questions the UK translator Ros Schwartz was facing when translating the novel Loin de Douala(A Long Way from Douala) by Max Lobe. Ros met up with the Swiss writer of Cameroonian origin at Translation House Looren to fine-tune her translation. We met her for an interview.

What is the book Loin de Doualaabout?

It is narrated by a young man, Jean, whose football-mad brother, Roger, has run away from home in a bid to reach Europe and become a star player. Jean and his close friend Simon set out in search of Roger, and the story is that of their road trip. Through their adventures and misadventures, the author presents an entire social and political panorama of Cameroon, which is riven by tensions, especially in the north. The novel is a real page-turner, a really good story, full of wacky characters and humour as well as pain and sorrow.

You spent two days here at Translation House Looren working on your translation with Max Lobe. Can you describe how you worked together?

The collaboration with Max Lobe was very productive; in the two days we were able to resolve all my questions. And we also had a lot of fun. Max would read the French out loud and then I’d adjust the English taking account of the music and rhythm of the original. For me it’s crucial to focus not only on the meaning of the words, but also on the sounds and rhythms. The translator constantly has to weigh up priorities. Some elements absolutely have to stay, but there are others that offer a little wiggle room. It’s like a Rubik’s Cube.

Do you always meet the author of the book you are translating?

Yes, I try to. I contact the author early on to introduce myself and ask if they are available to meet. That allows me to establish my credibility and address any anxieties the author may have. Some writers are very interested in the translation process and know a lot about it, others aren’t interested and don’t understand it or want to know. I like to find out what kind of author I am dealing with. The most important thing is for the author—if they understand English—to be happy with the translation.

Tell us a little about the problems you encountered while working on the book.

There are things that, at first glance, look very easy to translate but actually aren’t. One example: a character in the book is called “Omar de Benghazi”. He helps young Cameroonians cross into Nigeria and then to Libya, from where they try to reach Europe. You can’t translate this literally as “Omar from Benghazi”, because he is not from Benghazi, but he is sending kids to Benghazi. You could say ofBenghazi but that wouldn’t capture the meaning either. I decided to call him “Benghazi Omar”.

How would you describe the unique language of this book?

Most of it is written in standard French (Francophone children in Cameroon are educated under the French school system). But there is Camfranglais – a hybrid urban slang that includes some English words with a French pronunciation, but is not used by English-speakers. For example, instead of saying “tu ferais mieux de …” (you’d better …) in standard French, they say “bettertu fais ça”. There are other words that are neither French nor English but are borrowed from local languages. For example, the concept of boys making their journey to Europe is called “boza”.

How do you handle such particularities? Do you use specific strategies to translate them?

I don’t translate them. For me this is also an ethical decision. I’m acutely aware that English is a major colonial language and I don’t want the book to sound as if it was written by an English person sitting at home in London. The cultural specificity has to be preserved. There are words that are equally unfamiliar to the French and to the English reader. Max is based in Geneva and is writing very much with the European reader in mind. He uses these Camfranglais words in a way that is understandable for the non-Cameroonian reader, so I decided to preserve all the words that are neither standard French nor English.

Can you give us an example?

The word “pimentière” (chilli-pepper seller) is a synonym for prostitute. This word comes up for the first time in a whole string of insults which are all variations on the word “whore”. At this point it’s very clear what “pimentière” means and so it’s possible to use the expression throughout the book without having to explain it. It is important not to treat the reader as stupid. And Max Lobe told me that English-speaking Cameroonians use the word as well. My editor at HopeRoad, the UK Publisher, wants me to add a glossary of Camfranglais words at the back of the book, so the reader can refer to it if they wish.

Another difficulty are the standard French expressions that acquire a different meaning in the text. How do you deal with those?

In such cases, you have to translate the feeling underneath. “Sauf que” is used for emphasis. It has got nothing to do with the standard meaning of “except”. If someone is saying for example “je ne comprends pas pourquoi ils veulent sauf que go”, the underlying sense is “why are these guys so desperate to leave”. If I use one specific English word each time the author uses “sauf que”, it becomes unnatural. There’s always something that gets lost, but it’s essential to capture the feeling being expressed.

And how did you treat the English expressions? They add a stylistic element to the French original that the reader would miss out on if they were used according to standard English.

I kept them as they’re used in the original and put them in italics. If the character says in French “il est go”, I translate this with “he is go” and not with the standard “he has gone”. I plan to include a translator’s note explaining that all the English words in italics were in English in the original. I think I’ve succeeded in preserving enough of the flavour of the language without making it incomprehensible. If you translate everything into standard English, you lose the sense of place. Max certainly felt the translation conveys the atmosphere of Cameroon, and that was one of the joys of working closely with him.

English is spoken in several African countries. Did these different varieties of English inspire your translation?

No, I can’t have the characters speaking another English. There are some crossovers in the different African Englishes, but you can’t draw on a word that’s used in Nigeria but not in Cameroon – that would be like using a German word. I was also careful not to use British urban slang.

One might be tempted to use slang to translate slang …

… yes, but it would be the wrong culture. In one instance in the novel, I borrowed a word from British urban slang. There’s an expression for a very close friend who’s not a blood relative: “frère-ami”. In English slang, we have the expression “brother-from-another-mother” and I was tempted to use this. I asked Max and he told me that this expression is also used in Cameroon.

How did you come to translate this book?

The book came to me. I translated a short story by Max Lobe a few years ago for the translation magazine Words Without Borders. Because I translated Fatou Diome’s The Belly of the Atlantic, which is on a similar theme, the publisher asked me to translate Loin de Douala. So, the book found me, and I am very glad it did.

“Max Lobe certainly felt the translation conveys the atmosphere of Cameroon, and that was one of the joys of working closely with him.”

Interview and pictures by Steven Wyss

This interview was first published in the blog of Translation House Looren.

Ros Schwartz is a literary translator from French into English who lives in London. Among many other things, she has translated Antoine de Saint-Exupéry’s The Little Prince, sixteen of George Simenon’s Maigret novels and a range of contemporary French works of fiction and nonfiction, including Mireille Gansel’s Translation as Transhumance. She has translated a number of Francophone writers, namely Ousmane Sembène, Fatou Diome, Aziz Chouaki, Tahar Ben Jelloun and Yasmina Khadra. She is co-chair of English PEN’s Writers in Translation committee and gives regular talks and workshops. Her translations have won a number of awards, and in 2009 she was made a Chevalier dans l’Ordre des Arts et des Lettres.