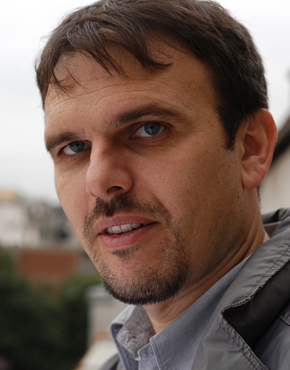 Writer in Exile by Saša Ilić

Nov 22, 2017 • No comments
“Someone must have been telling lies about Josef K., he knew he had done nothing wrong but, one morning, he was arrested.” This sentence by Franz Kafka could open any story on literature and exile, as it contains all the elements of a narrative of exile: a repressive state/system, an individual examining the origin of violence and his own actions, informants and a repressive apparatus. It ends with an arrest, as expected. Kafka wrote the opening sentence of his novel The Trial in the year…

“Someone must have been telling lies about Josef K., he knew he had done nothing wrong but, one morning, he was arrested.” This sentence by Franz Kafka could open any story on literature and exile, as it contains all the elements of a narrative of exile: a repressive state/system, an individual examining the origin of violence and his own actions, informants and a repressive apparatus. It ends with an arrest, as expected. Kafka wrote the opening sentence of his novel The Trial in the year in which The Great War broke out, at the time when both the political and cultural climate in Europe had changed dramatically. These were the times when all freedoms had shrunk, media censorship had increased and sabre rattling and propaganda had replaced proper journalism and works of literature.

One hundred years later, in the united Europe of today, at first glance this sentence may appear as an artefact from a Museum of Literature or a fragment from a university lecture, where curious students analyse the literature of Central Europe. For Doğan Akhanli, a German author of Turkish descent, The Trial’s opening sentence must have sounded like a terrifying flashback from the Old Continent’s traumatic past. On the morning of 19th August 2017, while on holiday in Granada, Akhanli was arrested without having committed a crime of any kind.

Doğan Akhanli was asleep when the “long arm” of Recep Tayyip Erdoğan’s regime knocked on his hotel room door. Initially the author thought that it was just a routine check on foreigners in Spain, in the aftermath of the terrorist attack that had taken place in Barcelona a couple of days before. He was wrong. The “terrorist” the Spanish police were after was Akhanli himself. The author was informed later that the Interpol arrest warrant was issued in his homeland, Turkey. This came as a great surprise, as he had often stayed in hotels across Europe and had never had encounters with the local police, suggesting that the Interpol warrant for Akhanli’s arrest was reactivated fairly recently, a consequence of the radicalisation of Erdoğan’s politics.

His dissident status can be traced back to the mid 1970s, when, after discovering left-wing press, Akhanli joined the illegal Revolutionary Communist Party of Turkey and started to be politically active. After the military coup on the 12th of September 1980 Akhanli had to go underground, but he was arrested five years later. He spent two and a half years in a military prison in Istanbul, where he was brutally tortured. After his release from prison Doğan Akhanli was closely monitored by Turkish security services, which resulted in him permanently leaving Turkey in 1991. He sought political asylum in Germany, finding his adopted home in Cologne, where he continued to write (mainly political prose and essays). He never stopped being highly critical of the Turkish state, its politics and stance towards the 1915 Armenian genocide. It is clear that Akhanli’s arrest, immediately upon his arrival in Spain, where he planned to spend his holiday, is directly linked to his criticism of the Erdoğan regime.

The German PEN Centre reacted immediately after Akhanli’s arrest, condemning the “politically motivated arrest of the author”. The German foreign minister Sigmar Gabriel followed with a similar statement, which came only days after he had clashed with Erdoğan regarding the Turkish president’s call to the electorate of Turkish descent in Germany to not vote for two major political parties, labelling CDU and SPD as “enemies of Turkey”. “Case Akhanli” happened after the ties between Berlin and Ankara were already heavily strained, which lead to Angela Merkel’s statement in which she warned that “international organisations like Interpol mustn’t be abused for prosecution of critics”. Doğan Akhanli was released 24 hours after his arrest, following a court hearing in Madrid, on the condition that he remains in Madrid for 40 days, a period during which Turkey could send a formal extradition request.

Doğan Akhanli’s literary work is closely connected with his work as a human rights activist. His best-known work is a novel Apocalypse of the Judgment Day (Turkish edition Kıyamet Günü Yargıçları – 1999; German edition Die Richter des Jüngsten Gerichts – 2007). It is a story about the genocide of Armenian people, which started in the late 19th century and culminated in 1915, seven years after the Young Turk revolution. Two prominent figures from that period, Talaat Pasha and Enver Pasha, who ordered and then oversaw the genocide, were shaped into the novel’s central characters. The second aspect of the novel is concerned with the life stories of people throughout 20th century who challenged the official version of this 1915 atrocity. By doing so, Akhanli established the tradition of critical writing in Turkey.

Radicalisation of Erdoğan’s politics is closely linked, among other things, with the preservation of the official account of Turkey’s past. Memory of the genocide is largely supressed, emerging onto the surface from time to time in rare critical writings by outspoken authors and journalists, writings that are always perceived as attacks on the Erdoğan’s regime itself. The case of Turkey is a paradigmatic one. It serves as a warning to all unstable democracies (“stabilocracies”) in the countries of the former Yugoslavia, especially those who have also buried deep the memory of genocides committed in the 1990s. Serbia is one of them. The authorities in Serbia today demonstrate all the features of authoritarian rule, with all the traumatic events and crimes of the past being successfully masked by an unprecedented propaganda about Serbia’s “economic progress”. The public debates on Serbia’s traumatic past, seeking truth and reconciliation in the region, which emerged in the early 2000s, along with many books published on the same topic, have ended up in the underground, in a kind of internal exile today.

This blog was originally published on ELit Literature House Europe website on 27 October 2017.