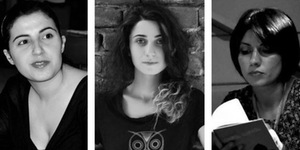 Diana Amphimiadi is a poet, publicist, linguist and teacher. Currently a doctoral student at the linguistic institute at the Tbilisi Javahkishvili University, Diana has published four collections of poetry, Shokoladi (Chocolate 2008), Konspecturi Mitologia (Resumé of Mythology, 2009), Alhlokhedvis Traektoria (Trajectory of the Short-Sighted, 2012 and Kulinaria (Personal Cuisine, 2013).

Liqokeli Lia was born in 1986, in a remote village of Khevsureti in high mountainous region of Georgia, with only 50 inhabitants, is a rising star of contemporary Georgian literature scene. In 2013 Publishing house Saunje brought together all her poems and published her debut book under the title Laughter of Devi’s Wife. Recently this collection was published in Sweden

Kevanishvili Eka is a journalist and poet. In 2002 she graduated with Master’s Degree in International Journalism from Tbilisi State University. Kevanishvili is an active journalist with 16 years of experience. She was an anchor and reporter of radio ‘Green Wave’. Last 8 years she works as a reporter for radio Free Europe/radio liberty, Tbilisi bureau.

The workshop will be lead by Natalia Bukia-Peters. Since 2011, she has been a translator for the Ministry of Culture and Monument Protection of Georgia. She is a member of the Charted Institute of Linguists and she works on various translation projects both from and into English.

Poetry Translation Centre’s workshops are open to anyone who can contribute a translation of a poem by a living African, Asian or Latin American poet who has an established reputation in their own language.