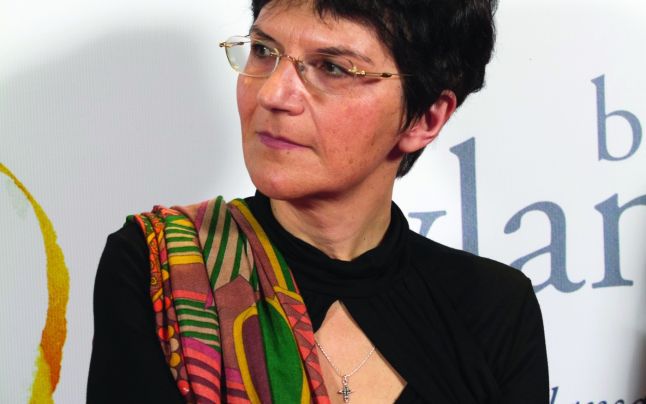 Following her participation at the 2014 edition of the London Book Fair, acclaimed cultural historian and novelist Ioana Pârvulescu meets her British readers in a special event celebrating the English publication of her 2013 EU Literature Prize winning novel Life Begins on Friday by Istros Books.

Ioana Pârvulescu will be joined by writer, editor and arts critic Lucy Popescu as well as publisher Susan Curtis Kojakovic, in a conversation about the thrills and challenges of writing in today’s Europe. The discussion will be followed by readings from the novel, offered by actor Sebastian Bădărău.

Ioana Pârvulescu was born in Braşov in 1960. She graduated from the Faculty of Letters at the University of Bucharest in 1983, establishing herself as a distinct voice within the literary establishment. Since 1996, she has taught modern literature at the same faculty, her 1999 doctoral thesis entitled Literary Prejudices: Comfortable Options in Interpreting Romanian Literature (Prejudecăţi literare. Opţiuni comode în receptarea literaturii române) earning her a Ph.D. She has coordinated the series Cartea de pe noptieră (Bedside Book) at Humanitas Publishing House, worked as an editor at the literary journal România literară, and has also translated from French and German several books by Maurice Nadeau, Angelus Silesius and Rainer Maria Rilke. She is a member of the Romanian Writers’ Union and a founder member of the Comparative Literature Society in Romania.

Lucy Popescu is a writer, editor and arts critic with a background in human rights. She worked with the English Centre of PEN, the international association of writers, for over 20 years and was Director of its Writers in Prison Committee from 1991 to 2006. Lucy reviews books for various publications including The Independent, The Financial Times, The TLS, Literary Review, New Humanist and Huffington Post. She has a particular interest in literary fiction in translation and free expression. She is a member of the Authors’ Club and on the judging panel for The Best First Novel Award. A Country of Refuge, an anthology of writing about asylum seekers compiled and edited by Lucy, is published in June 2016.

Susan Curtis-Kojakovic is the founding director of Istros Books, an independent publisher of contemporary literature from South East Europe, based in Bloomsbury, London. Istros Books was set up in 2011 to showcase the very best of literature – both fiction and non-fiction – from the Balkan region to a new audience of English speakers, bringing the best of European writing through quality translation. Its authors include European prize winners, polemic journalists turned crime writers and social philosophers turned poets. A former teacher, Susan has lived for periods in Belgium, Croatia, Italy and Slovenia, working with refugees and in schools. She writes fiction and also translates from Croatian/Serbian.

Sebastian Bădărău has over 20 years of experience on stage and in Film and TV. A graduate of the Faculty of Theatre and Television in Cluj and Central School of Speech and Drama in London. Some of his recent projects include ‘The Missing’ (BBC, 2014), the Belgian TV Series ‘De Ridder’ (Eyeworks, 2015-2016), the lead in Emily Wardill’s movie/performance ‘When you Fall into a Trance’ (premiered at the London Film Festival 2014), ‘Which is Witch’ (I love Television LTD and Be-Films, 2013), Meddlers (Tristan Bates Theatre, 2016), as well as many other short films and theatre productions. He has benefited from a combination of classical training and physical theatre inspired by the work of Peter Brook and Jerzy Grotowski. Both his teachers worked with Peter Brook and Eugenio Barba at the Odin Theatre.