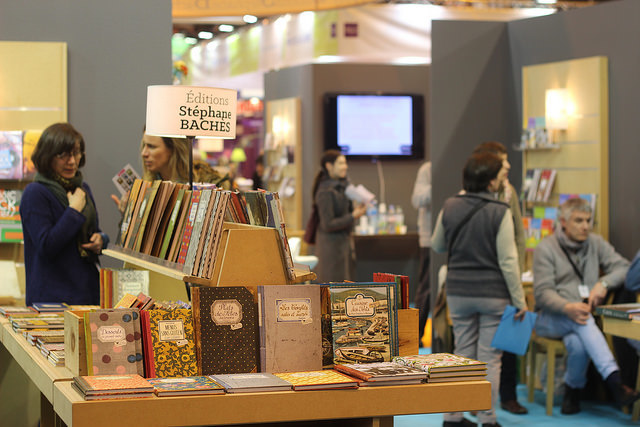 From its founding in 1981, throughout its entire thirty-two years, the Paris Salon du livre never witnessed a protest by writers, poets, translators or publishing houses. The first such demonstration–perhaps the first in history—took place at this year’s book fair. The initial reaction by some of the visitors when they saw the writers’ protest and read the words on their placards was a sort of wonder: Was this really a writers’ protest? Or was it theatre? But in fact what these approximately 200 novelists, essayists, writers, and translators were staging at the Paris Salon du livre was not a play. It was a serious expression of demands to be engaged with seriously. The call for this demonstration by the permanent council of writers in France, which houses 18 unions and associations, reflects the fear and anxiety around the status of French writers and also of writers more generally.

Modern French history is filled with examples of writers and intellectuals participating in social and political demonstrations. However, an individual person participating “as a writer,” demanding the rights of writers, is something new in the nature of French protests.

Brazil was the guest of honour that year and more than forty Brazilian writers participated in the Salon du livre that year, while well-known French authors marched and protested among them: Camille Laurens, François Taillandier, Isabelle Lévy, Pierrette Fleutiaux, Céline Minard, and Dominique Fabre.

In the main hall of the fair, they united under one slogan: Without authors, there’d be no books!

The decision to increase European taxes on books in France, particularly e-books, had negative repercussions on writers. The European decision to impose a tax on digital books in France and to raise the tax from 5.5% to 20% undoubtedly will lead to reduced support for cultural and literary spaces—everything related to writing—and also to writers fearing they won’t be able to secure sufficient rights to enable them to live in dignity. E-books are books too!

This means that writers, and all cultural workers, are in danger, since the author receives the least money in the division of revenue for each book sold; writers only get one Euro from the sale of each copy of their book, that is to say about the price of one baguette.

No immigrant writers in living France marched in the demonstration. Is this because the concerns of immigrant writers are different than those of French writers? This question is difficult to address here, and leads us to other important questions connected to language and translation, which I will discuss in a future post.

This blog was originally published on ELit Literature House Europe on 15 June 2015.