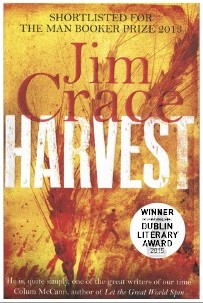 The Award is organised by Dublin City Council and at €100,000 is the world’s largest prize for a single novel published in English. Uniquely, the IMPAC DUBLIN receives its nominations from public libraries in cities around the globe and recognises both writers and translators. The winner was announced at a ceremony in Dublin’s Mansion House today.

Jim Crace was born in Hertfordshire and grew up in North London. He is the author of ten previous novels, including ‘Quarantine’ which was shortlisted for the award in 1999.

“The IMPAC DUBLIN award has a tremendous legacy of achievement; 20 years of being a truly international award, drawing its winners from countries and cultures where, as in Dublin, potential is recognised, excellence rewarded, and translation is respected” said the Lord Mayor of Dublin and Patron of the Award, Christy Burke.

He continued: “2015 marks a significant milestone as the 20th year of the IMPAC DUBLIN Literary Award. Not only has it changed the lives of the winning writers and translators but also brought widespread visibility to all the works shortlisted and nominated.”

The winning novel was chosen from a total of 142 titles, nominated by libraries in 114 cities in 39 countries. It was first published in the UK by Picador. The shortlist of ten novels, as chosen by an international panel of judges, included novels from five continents. Jim Crace is the fourth British author to win the prize in its 20 year history.

Set in an unspecified time in the past, in a green corner of England, ‘Harvest’ is the story of the last days of a village and the death of an age-old way of life.

Commenting on his win, Jim Crace said: “It has been an overwhelming surprise and a delight to discover that my latest book has won the IMPAC DUBLIN award. ‘Harvest’ proved to be a generous novel in the writing. Readers and critics were more than generous in their responses. And now, thanks to the further generosity of a whole wide-world network of book-loving strangers, ‘Harvest’ has struck lucky again – it will be included in the distinguished and twenty-year-long list of fiction honoured by this truly international and discriminating award. No writer could hope for more than that.”

“’Harvest’ is a story that explores some of our greatest fears, those of change and difference” said Margaret Hayes, Dublin City Librarian. “Jim Crace, our 20th winner, joins a unique creative collective whose stories will continue to cast a spell over readers for many years to come.”

Jim Crace received a cheque for €100,000. The prize money was presented to the winner by Owen Keegan, Chief Executive of the Award’s founders and sponsors, Dublin City Council. Dublin City has a long and rich literary heritage as well as a thriving living literary scene, and was designated a UNESCO City of Literature in 2010.

The judges commented: “At times, ‘Harvest’ reads like a long prose poem; it plays on the ear like a river of words. But then again, Jim Crace is a consummate wordsmith; his understanding of human nature is uncanny and he never drops a stitch from start to finish. All human life is here: its graces and disgraces and there is life too in every small stone, flower and blade of grass. A powerful and compelling novel, Harvest is a worthy winner of the International IMPAC Dublin Literary Award.”

“’Harvest’ is deftly written, in language – formal, slightly archaic even – that reflects the setting it describes. Tightly plotted; less than a week passes from the moment smoke is sighted until the books’ fateful outcome, and yet once underway, we have the sense that everything is inevitable.”

All the shortlisted books, as well as copies of the 142 novels nominated for the 2015 Award, are available to borrow from Dublin public libraries.