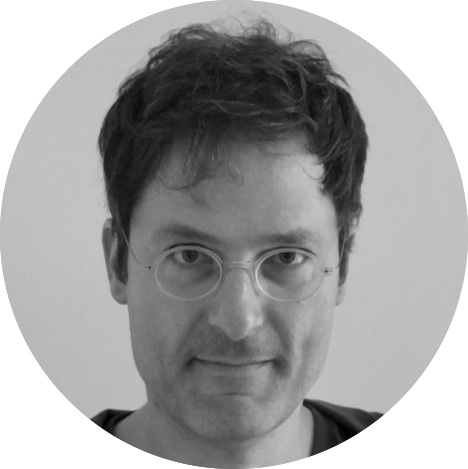 There was a well-known book of science experiments for kids with a chapter titled ‘Every Eye Has a Blind Spot’. It opened with a horizontal black rectangle framing two illustrations: one looked like a faraway full moon; the other was the head of a little girl. Like the moon, the girl’s head seemed to float in the night sky, and even though she was beheaded – or rather disembodied – she looked happy and beamed a mischievous smile.

The caption told readers to cover their left eye, stare at the moon with their right eye, and slowly lean toward the page. It said the little girl would disappear, and that’s exactly what happened: she disappeared behind a dark veil, only to reappear as soon as you backed off.

The book went on to say that, if you stood twenty-something yards away from someone, you could make the entire person disappear, even a grown-up, and that it was due to the head of the optic nerve. This spot – the optic disc – can’t detect light.

At first I thought the magic of this exercise lay entirely in the possibility of making things and people disappear (an astronaut, I thought, could make the entire Earth disappear). But then I realised that the really inexplicable part was that these objects and people – especially the girl in the black rectangle, on whom I’d developed a bit of a crush – reappeared or simply appeared to the viewer’s sense of sight, complete in their own recognisable forms.

The ‘seeing spots’ struck me as even more remarkable than the ‘blind spots’. When I thought about animals that had no eyes, I felt sorry for them, and then I also felt sorry for trees and stones.

Matteo Terzaghi was born in Bellinzona. His latest publications are the collection of prose pieces Ufficio proiezioni luminose, his pamphlet on silence in literature La gag del cappello, and the chapbook Gotthard Super Express.

Alta L. Price runs a publishing consultancy specialised in literature and nonfiction texts. She translates from Italian and German into English, is currently vice president of the New York Circle of Translators, and is a member of the PEN Translation Committee.

Photo of Matteo Terzaghi © From the Auhtor’s Archive