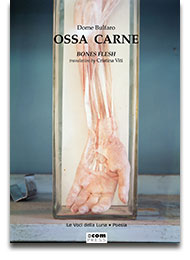 Dome Bulfaro is an award-winning poet, teacher, publisher and performer from Monza. He is founder and director of the Poesia Presente Festival, a school of poetry and performance, co-founder of LIPS (Lega Italiana Poetry Slam) and wrote about Italian slam in Guida liquida al poetry slam.

Cristina Viti is a translator and poet working with Italian, English and French. Her most recent publication was a co-translation of poems by Anna Gréki (The Streets of Algiers and Other Poems, Smokestack Books, 2020). Her translation of Elsa Morante’s The World Saved by Kids and Other Epics (Seagull Books, 2016) was shortlisted for the John Florio Prize.