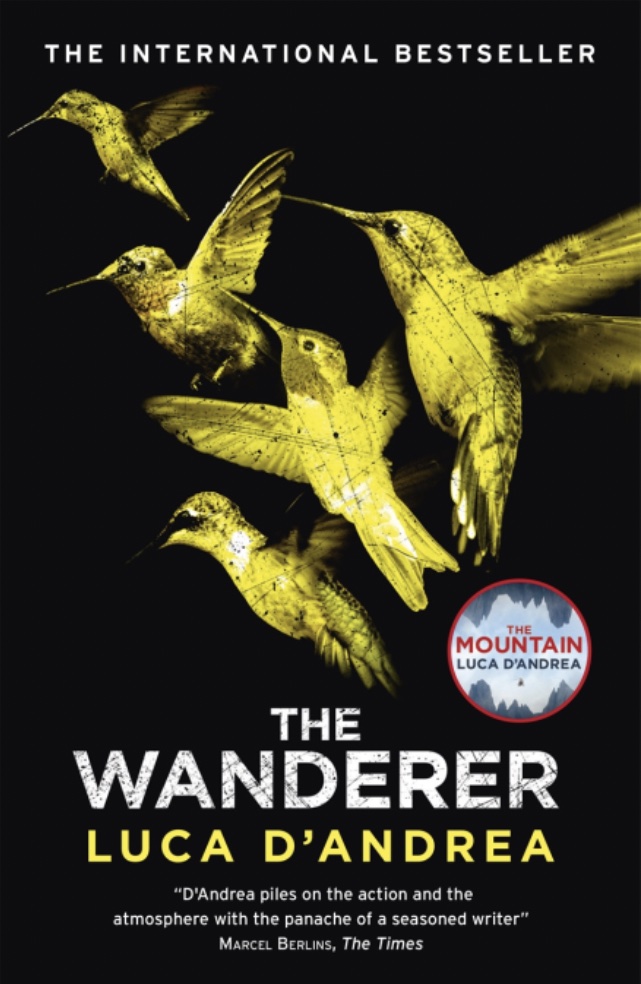 The Italian Riveter: From THE WANDERER by Luca D’Andrea, translated by Katherine Gregor

On June 8, while Kreuzwirt was filling with the BMWs and Mercedes of South Tyrol’s bigwigs, Sibylle had allowed herself a lie-in, since Oskar had decided to keep The Black Hat closed as a sign of mourning. When she left home, meaning to go for a ride on her Yamaha, she saw the letter. The envelope was sealed. No sender. A shy admirer, perhaps?

Sibylle knew she was quite attractive. The ogling, handsy maniacs at The Black Hat had not taught her anything she did not already know. Except that no sooner had she opened up a little with the young men who passed the First Glance Exam (and subsequent Pillock Test) – cute enough to arouse her interest and not so stupid that she would refuse to go to bed with them for the sake of a little exercise – than they would scurry away. I’m not ready for you yet. It’s me, I … Surely you can see that. Sib had heard it all.

The problem was that Sibylle was a complicated girl in a part of the world that loved order. The young men who courted her were simple. They wanted a girl who would marry them in the Church of Sand in Taufers and commit to churning out two or three brats in succession and spending the rest of her life cooking, ironing and making sure she was ready and willing on Saturday nights. Really not the kind of future Sib had in mind.

Sure enough, the envelope contained no passionate declaration of love, but a black-and-white photograph. An impossible photograph. Erika lying by the lake, wearing her Maturaball dress, her hair caked in mud, her face turned towards the dawn.

And a symbol traced next to her body.

‘Evidence that Erika was killed.’

The symbol drawn in the mud right next to Erika’s body wasn’t there in 1999. He hadn’t seen it when Milani had flung him headfirst down the hill, and nobody had mentioned it during the police briefings.

‘It’s not a photomontage. I had it analysed by a nerd in Bruneck. He thought it was a still from a film. The camera film is from the period. The light suggests it was shot a few minutes after dawn. It’s authentic.’ Sib drew a breath and began rummaging through the box. ‘Spooky Erika could read the future. Did you know that?’

Tony recalled that the Spooky Erika business had surfaced very quickly in ’99, but little else had come to light. A daydreamer. Few friends. An extra boost, Milani had remarked with bitterness, for the suicide theory. No murder. No post-mortem rape. Say goodbye to your scoop, newbie.

Sibylle showed him a deck of tarot cards. ‘These were Erika’s. Do you know how they work?’

‘Everyone has a different way of laying them out. Some people arrange them in a circle or a triangle, others in groups of three or four. Everyone has their own system. This is how Erika did it.’

Sib began to arrange the tarots on the coffee table. Two parallel vertical lines of three cards each, very close to each other. She added two more at the base, creating a kind of arrowhead. Then two more higher up, so as to form …

‘Erika used to call it “the hummingbird smile”. Can you picture it?’ The pattern of cards on the coffee table was identical to the symbol drawn in the mud next to Erika’s body.

‘Now look at the photo carefully,’ Sibylle said. ‘See the serial number? The one I found in the letterbox was the first one taken at the scene of Erika’s death. The others are here.’ A thin file bearing the stamp of the Bolzano court. ‘I got it from the public prosecutor’s office. It has the statements of the carabinieri, the photographs taken that morning and the autopsy report on Erika. Notice anything strange?’

It stood out like a clown at a funeral. The serial numbers of the pictures in the file went from seven to fifty. Moreover, the light in these images wasn’t the same as in the missing photographs, as though they had been taken later in the morning. Erika’s body was positioned differently and, just as Tony remembered, there was no symbol next to her.

‘I think the hummingbird smile would have led to questions, but since someone made it disappear, everything was straightforward. On the twenty-first, Erika killed herself by drowning in the lake. On the twenty-second, the autopsy was carried out, and confirmed death by drowning. Suicide. On the twenty-third, the body was cremated. Look at the signature of the doctor appointed by the court to write the report.’

The handwriting was untidy but legible. Doctor Josef Horst. The man who had discovered Erika’s body at 4.00 a.m. on March 22, 1999.

Tony wiped his forehead with his hand. He was sweating.

‘So, in your opinion, Horst kills Erika and draws the symbol in the mud, but when the carabinieri arrive he regrets it, wipes it out without them noticing, and somehow makes the pictures they had already taken disappear. Then he falsifies the autopsy. It doesn’t add up.’

‘No, it doesn’t. I think Horst found Erika’s body and didn’t see the hummingbird smile at first. Understandably. It was night-time. It was dark. He was upset. He noticed it only at dawn, when the carabinieri had already taken pictures one to six. That’s when he erased it. Then—’

‘He silenced the carabinieri?’ Tony said. ‘Made the pictures disappear? Don’t you think it’s a bit … far-fetched?’

Luca D’Andrea is a writer and teacher from Bolzano. He published the Young Adult fantasy triology, Wunderkind, under the pseudonym G.L. D’Andrea. His first thriller, La sostanza del male, was published in over thirty countries, in English as The Mountain.