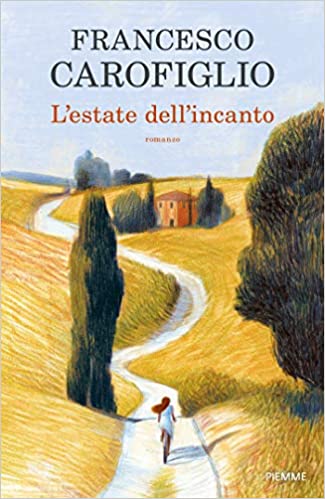 The Italian Riveter: From L’ESTATE DELL’INCANTO by Francesco Carofiglio, translted by Elena Cantoni

We went to my grandfather’s. My father’s father.

He lived alone on a farm, on the edge of the woods. Grandma had died when she was very young, leaving my father to be brought up by his nanny and the help. A motherless, almost fatherless child. Grandpa Ugo was incredibly tall, with a thick white moustache that made him unapproachable. Minding the place was Elda, the housekeeper. She was short, wiry, with a weathered face. As busy as a bee, always intent on some chore, fussing with housework.

My mother never loved grandpa, I think, and my father had kept his distance after he got married. But I didn’t know it back then. Father was a socialist, grandpa an old anarchist, though he came from aristocratic stock. I still keep a photograph of the two of them together, standing side by side, before I was born. Grandpa is wearing a three-piece suit, my father is in shirtsleeves, without a tie. Their expressions reveal no trace of a smile, of familiarity. Grandpa towers over my dad, with the farm in the background. I think that was the last time my father had been there.

Villa Ada was beautiful and austere, at the top of a ridge in the hills surrounding Pistoia, a few kilometres from Calamecca, a medieval town in Valdiforfora. The names of those places sound straight out of a Rabelais novel, both playful and mysterious.

The farmhouse itself was a squat building, a clear-cut shape against the backdrop of sunsets that set the valley ablaze. The lawn all around it was hedged in by well-tended shrubbery, and beyond that was the courtyard, the chicken coop and the stables, with Aldo, an old Maremmano horse. Next to the barn a lean-to housed the buggy and grandfather’s car. The sheep and pigs were long gone.

Grandpa Ugo was a painter. He had been a pupil of Gordigiani and a friend of Alfredo Müller. At the turn of the century he had been to Paris with Müller and was introduced to Cézanne, Pissarro, Toulouse-Lautrec. But he hadn’t been as successful as his friend, and had returned to Tuscany. His studio faced the valley; it was flooded with light streaming in from the huge windows, and it was cold. Grandpa painted all day long and was not to be disturbed, ever. The air inside the studio was heavy with the smell of oils, turpentine and the humidity that traced ever-changing landscapes of mould on the walls. The longer side of the room was crowded with canvases stacked against the wall, tied up with string and covered with cloth, while huge easels stood along the shorter side. Some of grandfather’s paintings were as wide as the wall itself.

We arrived at the farm on a Sunday in June. Getting off the train at the station in Pistoia we were met by Ottone, a farmhand deeply devoted to my grandfather, who had come to pick us up in a truck reeking of manure. It took us two hours to get to Villa Ada. The heavy rains had turned the roads to mud. Yet I loved that journey. I had never been outside Florence before, never visited grandfather in the country.

Great oaks flanked the road on both sides as we reached the valley. Gazing through the truck window, buffeted by the drumbeat of potholes, I followed the dizzying procession of trunks, a curtain becoming denser and thicker as we rode up the hill. The cool air from the wood brought a smell of resin, mitigating the stink of manure. Through the trees I thought I saw the magical shapes of animals that for years had lived in my bedtime stories. The grey owl, the silvery fox, the blue hare. I was excited and happy.

After yet another hairpin bend, the landscape opened onto a cheerful sunlit meadow, and the farmhouse appeared at the top of the hill. I recognised the blunt shape from a picture that hung in our living room in Florence. I turned to look at my mother and she smiled at me.

Ottone, who hadn’t said a word all the way from the station, spoke those two words in a croaky voice, exhaling a whiff of salami.

After a few more minutes, with the truck making its slow way through the mud, we finally reached a wrought-iron gate and entered the dirt road to the courtyard. Ottone honked the horn and the dogs started barking.

Francesco Carofiglio is an Italian architect, writer and director. His first novel With or without you (in Italian with an English title) was published in 2005. He has also written a number of plays, and continues to work as an architect alongside his writing career.

Elena Cantoni is an Italian translator based in Lombardy. She translates between English and Italian. She has translated a number of English language writers into Italian, and is the English translator for Francesco Carofiglio.