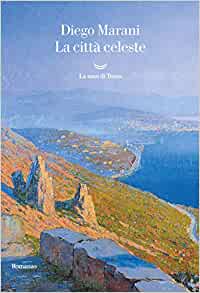 The first time I arrived in Trieste was on a bright October morning.

After a long journey through the greyness of the plain, the train burst out of the fog, and the sea appeared below us. It sparkled, motionless, in the distance the smoky silhouette of a ship passing.

The sheer cliff above the railway was reddened with autumn foliage, which spread through dense woods as the cliff opened onto the plateau.

In the narrowest passages the train whistled to announce itself and the rattle of wagons grew in intensity.

The limpid sky made the outlines of the landscape clearer and, at each curve, a new vision of the approaching city appeared before us.

I was left in the compartment with just an elderly gentleman, who had a restless gaze, and had done nothing but stare impatiently out of the window for the whole journey from Venezia Mestre station, where he had got on. He was wearing a crumpled, old-fashioned suit, grey, just like the long overcoat he had never taken off.

When the first houses began to parade in front of the windows, he pulled his large suitcase from the luggage rack and headed towards the exit. I followed him, hauling my backpack on to my shoulders. Only then did I notice that he was crying.

At times, he hid his face, but he couldn’t stop looking at the city, which was opening below us, street after street. He glanced around him, his eyes shiny and anxious.

Soon the other passengers waiting to get off also realised he was crying, and everyone looked away.

It is unsettling when a man cries. It doesn’t arouse pity as it does when it’s a woman or a child. A man’s cry is more like a whim, a weakness. Instead of consoling him, one would rather punish him.

Once he got off, he vanished into the crowd of the station, leaving a trail of sadness in the joyful light of that arrival, which for me was instead a landing place, a dizzying start.

That scene stuck in my mind, and today, after such a long time, I still recall it with a shiver.

In that man’s eyes there was the immensity of destiny, the regret for a life already spent, and that morning’s sun was its last glimmer.

I didn’t think one could cry for a city. But back then I didn’t know that cities are like women: one can fall in love with them and never forget them.

Diego Marani is a prolific Italian writer of fiction and non-fiction, whose most famous novel, New Finnish Grammar (‘Nuova grammatica finlandese’), has been translated into several languages. He is multilingual, invented the language Europanto and worked for decades in the European Commission. He is today Director of the Italian Cultural Institute in Paris.

Barbara Ricci is Italian and lives in Bristol, where she is a translator and interpreter. She has worked as an audiovisual translator and editor for TV, cinema and international film festivals (Venice, Cannes and Locarno), and as a translator of mainly non-fiction and children’s literature.