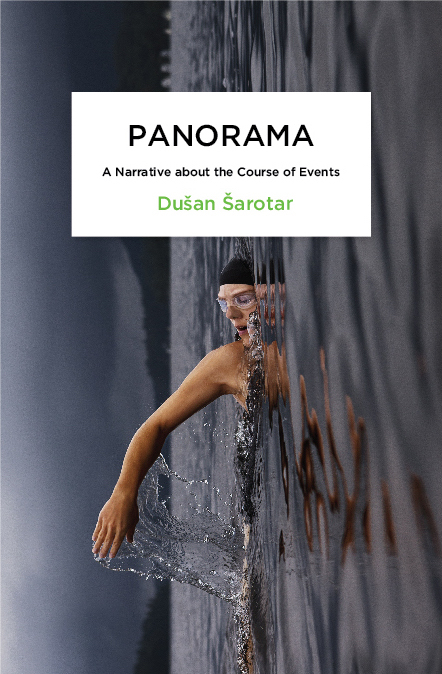 Panorama is Dušan Šarotar’s fourth novel, following on from Island of the Dead, Billiards at Hotel Dobray and Stay with Me, My Dear. It was first published in Ljubljana by Beletrina in 2014 to positive reviews, and this fine English translation by Rawley Grau, published by Istros Books in association with Peter Owen as part of the Peter Owen World Series, is – running against the more usual flow for British publishers – the first into any language, although a Spanish translation is also forthcoming. It is a short, compact, complex and densely lyrical text, a meditation inter alia on language, time, memory, loss and love.

On the surface – and it has many surfaces, many interlocking overlayers – it tells a number of stories relating to an interlocutor, a Slovene writer who has travelled to Galway perhaps to give a reading but more to find peace and a place in which to write. He stays on and travels through the Connemara landscapes, usually in the company of Gjini, an Albanian journalist who had migrated to Galway City some many years before and who, in turn, also makes journeys around Connemara with a Canadian woman who is there in search of peace in her father’s roots. Woven through these strands are many others concerning the narrator’s time in a number of Belgian cities, discussions and meetings with ex-Yugoslav writers and friends he knows who work there, many of them former refugees from the wars in Bosnia and the destruction of Sarajevo, another city – in addition to Galway, Brussels, Antwerp and Ghent – that has a strong place in Šarotar’s narrative. Except that narrative is a misleading term, or, rather, if it is the term to be used then it needs be understood in a very contemporary sense of broken weave.

In many ways it is a meditation on loss and change – ‘I saw tracks in the lightly pressed grass, in the fine sand on the shore and then in the slight rippling of the water’s surface; she is leaving, I thought; she is running back to the sun’ – and on time, migration, language, ocean, love and war. It is densely compacted: its two hundred or so pages seem to expand much as a paper flower from childhood did when put in water, or to have the dense, burnable qualities of the peat that provides part of its subject matter and background; or as a tablet that holds immense numbers of images in its compacted layers, its clouds. The text seems able, indeed, to talk of departed days, while at the same time to be startlingly relevant to time-fractured contemporary lives. Not surprisingly, travel is a constant theme: railway journeys abound, within Belgium and even the anachronistic one from Galway to Clifden, as do bus journeys, be they from Galway, within Antwerp or from Sarajevo to Mostar, and car journeys on the wild roads of Connemara or interiors of Bosnia; but also journeys by hydrofoil; by bicycle through remote moors as also through the Belgian countryside and both to the sea’s edges; and journeys negotiating cities and moorlands by foot. And cities get named almost as people: Mostar, Maribor, Antwerp, Galway, Sarajevo, Ghent, Brussels and others almost in passing. There are asides on great literature, on teaching literature, on translation, on bars and in bars (in Galway, on the Aran Islands, in Brussels), on bookshops, on empty beaches, on peat whose compression echoes the prose, on lighthouses and, above all, on migration and the wars that cause migration. Much of the middle sections of the book tilts around Ypres, Ypres of the First World War and the Ypres of today. One of the journeys outlined is that taken by the Order of the Irish Dames of Ypres from their destroyed convent in 1914 to their eventual purchase of Kylemore Castle in the raw heart of Connemara. Yet, despite the intensity and range of life strands in the narrative (let’s stay with this word), Šarotar has plenty of room for lyric interlude, for lyric flights that become part of the book’s texture and are earthed by the turf and architecture of land and city or pulled apart by the power of the sea.

Panorama takes as starting point the migration of an Albanian journalist and the migrations of many from the west coast of Ireland throughout the past almost two hundred years. Yet another starting point, though, is the work of Gerhard Richter, whose exhibition ‘Panorama’, shown in Ghent in 2008, is alluded to and seems to hover over much of the text. Šarotar is, in fact, also a photographer and film-maker: his intuitions toward Richter’s sequence ‘Clouds’ (some of which were shown in Ghent and are echoed in Šarotar’s own photographs of cloudscapes in the text) have clear reverberations right through the novel, and a Richter quote that prefaces the Ghent catalogue might really be describing part of Šarotar’s probing: ‘I don’t mistrust reality, of which I know next to nothing,’ says Richter, ‘I mistrust the picture of reality conveyed to us by our senses, which is imperfect and circumscribed.’ But the novel is also a paean to certain writers of the former Yugoslavia and a meditation on Balkan histories: the Slovenian poet Gregor Strniša whose spirit – especially in his volume Vesolje (Space) – runs like a dark star through the text, and, above all, Ivo Andrić, whose short story ‘Letter from 1920’ is evoked as a spirit-level to our lives and whose own life hinges us back to the origins and outbreak of the First World War that then erupted so brutally across Europe and the tidal trope of which manages to bring this novel to its conclusion in almost elegiac calm.

And, surely, behind all this is also W.G. Sebald. His presence is sensed from the opening pages of the book, from its first sentences, and then in its final ten or so pages there it is, a grateful allusion to Sebald’s Austerlitz, the Slovene translation of which had appeared in 2005. Šarotar had previously read The Emigrants in translation, and that had made a deep impression, and, at the time of writing, he is preparing an introduction to the forthcoming Slovene translation of The Rings of Saturn. In Panorama he has clearly taken Sebald into his prose-stream, into the blood of his writing: the densely layered overlapping of texts, the congested confusions of reported speech and textually rich doubt as to quite who might on occasion be speaking, the use or inclusion of photographs in the text (although Šarotar’s use is subtly different from Sebald’s), the occasional intended, demystifying ‘error’ (as in the misspelling of Guglielmo as Gugliemo from the plaque to Marconi, which intentionally is not ‘corrected’ in the text), the collaging of various references and sources. But there are also strong differences between the two, and if Šarotar in his novel places his work in the tradition of Sebald, it is at an angle very much his own. His Panorama is a development from his previous prose, in particular the short story collection Nostalgia and his novel Billiards at Hotel Dobray. This latter – an account of the persecution of Jews in Šarotar’s home town of Murska Sobota in north-eastern Slovenia, close to the Hungarian border – is based on the life of his grandfather. Its prose may be less dense and compact, less ‘Joycean’ than that of Panorama. In Panorama Šarotar seeks to condense time until it is on the point of imploding in on itself and the reader, and here he is reminiscent of László Krasznahorkai or the latter’s filmic collaborations with Béla Tarr. Train and travel are refrains throughout their work, too: the final words of Šarotar’s novel, beautifully brief and laconic at the end of a text where language has been so compacted and urgent as to be almost its central character, are simply ‘I rode on to Antwerp station.’

Published by Istros Books as part of their World Series with Peter Owen. More about the book here.

Dušan Šarotar is a Slovenian writer, poet, screenwriter and photographer. He has published five novels (Potapljanje na dah/ Island of the Dead, 1999, Nočitev z zajtrkom/Bed and Breakfast, 2003, Biljard v Dobrayu/Billiards at the Hotel Dobray, 2007,Ostani z mano, duša moja/ Stay with me, my dear, 2011 and Panorama, 2015), two collections of short stories (Mrtvi kot/ Blind Spot, 2002, and Nostalgia, 2010), three poetry collections (Občutek za veter/Feel for the Wind, 2004, Krajina v molu/ Landscape in Minor, 2006 and Hiša mojega sina/ The House of My Son, 2009) and book of essays (Ne morje ne zemlja/Not Sea Not Earth, 2012). Šarotar is also author of fifteen screenplays for documentary and feature films. His short film, Mario was watching the sea with love, based on authors short stories from the collection Blind Spot and on his screenplay, won in 2016 Global short film award in New York and the first prize in Ningbo, China, for the “best short film” in selection of Central and East European film selection. Šarotar has also a several photographic exhibition in national galleries and abroad. Photographies from his series Souls was included in permanent collection in Art gallerie of Prekmurje.

Rawley Grau, originally from Baltimore, has lived in Ljubljana since 2001. His translations from Slovene include the novel The Succubus by Vlado Žabot (translated with Nikolai Jeffs), the prose collection Family Parables by Boris Pintar, the play Scandal in St. Florian’s Valley by Ivan Cankar, and essays by Aleš Debeljak. He has also translated poetry by Miljana Cunta, Janez Ramoveš, Andrej Rozman Roza, and others. Most recently, he has translated (from Russian), co-edited, and annotated the book A Science Not for the Earth: Selected Poems and Letters by the nineteenth-century poet Yevgeny Baratynsky. He has translated Gabriela Babnik’s Dry Season for Istros Books.