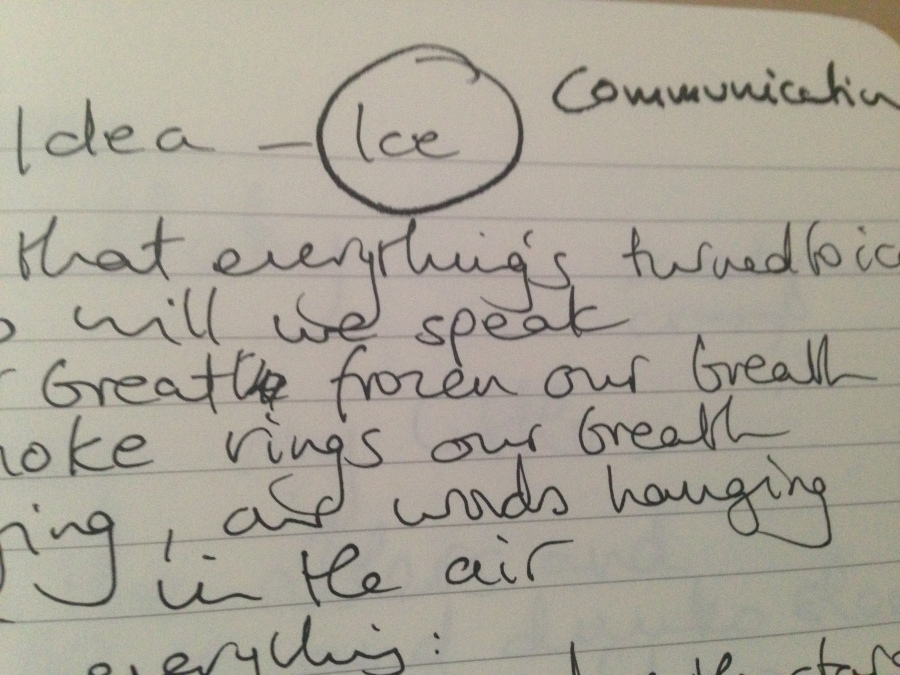 Snow Q: What a difference a bear makes… by Maria Jastrzębska

Polish-British writer Maria Jastrzębska is involved in an exciting new collaboration with fine artist Dagmara Rudkin and composer Peter Copley reimagining the Snow Queen by Hans Christian Andersen. They are exploring themes of migration, exile, mental health, gender and sexuality. They are documenting the development of this project on their website. You can also follow SQ on Twitter (@snowqproject).

In her book on translation, This Little Art, Kate Briggs points out that what we think of as various classics we have ‘read’ are often in fact, of course, someone’s translations.  This is certainly the case for all of us working on Snow Q, our collaborative project to reimagine Hans Christian Andersen’s Snow Queen fable.  None of us knows the Danish original.  We are drawing inspiration from memory –  our memories of reading or listening to the story as children  – and from rereading it now.  However in both cases these are not Hans Christian Andersen’s words but how someone else interpreted them. Does that matter?

In one English translation (by H.B Paull) the Snow Queen invites Kai to creep under her cloak of ‘warm fur’. Which animal’s do you then imagine it was? In another (by Mary Howitt), as in various Polish translations it is a bearskin. Incidentally the Polish translator Stefania Beylin – like us – did not know know Danish, she in turn worked from a German version…But there’s more to it than details like this. What about the tone and style of how the story is interpreted?

I talked about this to Bogusława Sochańska director of the Danish Institute of Culture in Warsaw who has recently published new translations of Hans Christian Anderson’s stories from Danish into Polish. She also kindly sent me her insightful essay tracing the history of the reception of Anderson’s stories in Poland. I shuddered both as an author and translator myself at what liberties have been taken with his work to sweeten and sanitise his language as from the second half of the 19th century he was increasingly considered solely a children’s writer. (Anderson himself clearly believed his stories addressed both adults and children.) Suggestions of sexuality or drunkenness say, his irony and plain speaking were often simply excised; other passages were added to make the stories more didactic and in keeping with the morals of the time. (Exactly what Deborah Price was talking about in our previous post!)  This was done, Sochańska argues, at the cost of depleting Anderson’s humour and irony, his craft, deliberate use of everyday, non-literary language and his philosophical subtexts. In some versions of Snow Queen Kai puts together an ice jigsaw to spell out the word ‘love’ – Andersen had actually said ‘eternity’.  At the end of the story some versions added in that Gerda and Kai loved each other, granny and their families when none of that was in the original!

As for Andersen himself was he drawing on/’translating’ from other sources? Stories in the oral tradition he had heard as a child? Is there such a thing as the original?

Fairy tales were part of my Polish childhood. I loved being read to. Which of my languages did I first hear the Snow Queen in? I’ve always been drawn to the magic of fairy tales, the way anything can happen.  I asked writer and translator Anna Blasiak from the European Literature Network, one of Snow Q’s partners, about their significance in East/Central European culture:

‘Fairy tales are and have been a rich source…A number of Polish literature classics in fact reinterpreted them (for instance Słowacki, Mickiewicz). Fairy tale elements also appear in more modern texts ( in Leśmian’s, Lem’s, Krall’s, Tokarczuk’s writing), often as anti-fairy-tales or stories mixing fairy-tale with other elements, sometimes in a post-modern attempt to startle the readers and make them question their habits and expectations.

The difference between their role in Western and Eastern/Central Europe might be the link to folk/popular culture, which remains a bit stronger in the East. Encouraged by authorities in communist times, it was never completely severed in the East and the folk/popular element of fairy tales and oral traditions, remains more embedded in contemporary culture.’

Anna said she knew the Snow Queen story – one of my absolute favourites – but it had frightened her. ‘I’m not sure if I liked it – I was a bit scared of it, definitely fascinated though. The question is – why do we remain so fascinated. Is it the fantastical element, which gives us a momentary respite from the everyday reality? Is it all the gore, which fits well with our minds desensitised with modern cinematography, TV and games? Is it nostalgia for the past, for what is long gone? Moral lessons? Or perhaps it is simply our need to touch the mythical, the archetypal?’

Writing anew or ‘writing-again’, as Kate Briggs talks about it, is intrinsic to all translation. In the Snow Q project we are ‘translating’ the story or aspects of it into our own medium, visual art, sound, spoken word… Ours is decidedly version rather than an attempt to render the original faithfully. Translation, from the Latin, means to bring or carry over. Translating the translation of a translation …we have entered a hall of mirrors. Mirrors broken into a thousands, millions, billions (depending on the version) of fragments in this case.  Yet each of us is attempting to capture some essence, there in the ‘original’ and to do it justice. Will it be wrapped in bearskin? Vegan fake fur?  Some other metaphor? Or laid…bare?

This blog was originally published on Snow Q Project‘s website on 24 August 2018.