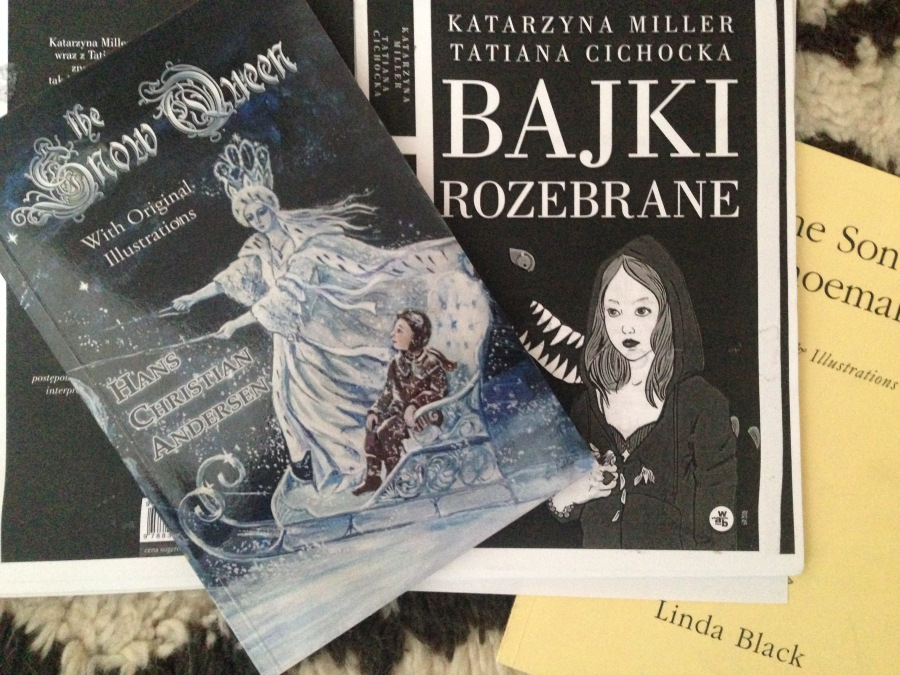 Snow Q: Happily Ever After? by Maria Jastrzębska

Polish-British writer Maria Jastrzębska is involved in an exciting new collaboration with fine artist Dagmara Rudkin and composer Peter Copley reimagining the Snow Queen by Hans Christian Andersen. They are exploring themes of migration, exile, mental health, gender and sexuality. They are documenting the development of this project on their website. You can also follow SQ on Twitter (@snowqproject).

When we first talked about Snow Q as a possible collaboration to reimagine the Snow Queen story we had no idea how much scholarship and interest surrounded it. The film Frozen was loosely based on it. It inspired the Narnia books. Interpretations, feminist ‘misinterpretations’, artistic, musical, film, scholarly and literary takes on it abound. We’re indebted to Heather Robbins, Research Assistant at the Sussex Centre for Folklore, Fairy Tales and Fantasy  – one of our partners – for helping us to research Hans Christian Andersen’s story. She has introduced us to the work of scholars all over the world such as Pauline Greenhill, Women’s and Gender Studies Department, University of Winnipeg, who has written ground-breaking essays about the Snow Queen in film, (eg. ‘Team Snow Queen: feminist cinematic ‘misinterpretations’ of a fairy tale’). With the project well under way now we’re searching, meeting up, talking about zillions of ideas and issues.

Dagmara’s questions got us all thinking at Team Snow Q. What is art for? Is our aim to mirror (with all the cracks) human suffering – at its bleakest, most confused, despairing? Or is it to entertain our audience? I often know the end line of a poem I’m writing.  The ending, as Toni Morrison famously said, is where I start. But for our Snow Q project I’m not sure. Does Gerda find Kai? Do we end on a melancholy or uplifting note? The story has a happy ending. But then it is part of a specific fairy tale genre. Is that an outdated mode? Does it fit our contemporary lives?

I asked Heather Robbins who said:

‘I think fairy tales are still relevant today because they are so deeply embedded in our subconscious as symbols, archetypes and plots that they have become tools: tools to start conversations about different groups by retelling them through different narrators; tools to sell us merchandise through advertising recalling fairy tale plots; tools to think about society and how to change our own story.’

Are fairy tales just for children?

‘You can enjoy the cleverness and beauty of a well-told fairy tale at any age, but sometimes I think children enjoy fairy tales more than adults because fairy tales are still new to them; kids really find them terrifying, hilarious, upsetting, etc. But there are probably more fairy-tales written for adults than there are aimed squarely at the very young, and these are often a comment on society delivered with a knowing wink, which are a satisfying, wry read for grown-ups.’

I asked the same questions of Deborah Price, lecturer in Children’s Literature for the Open University and author of several Early Years books, who said:

‘Fairy tales were originally written for adults as part of recording an oral storytelling tradition.  Only later did they become associated with children and were used to deliver morals and instructions from adults:  ‘Don’t stray from the path’, ‘Beware of strangers’. Every retelling and reworking of an old tale is necessarily influenced by that society’s structures and morality, changing through time – look how the heteronormative Disney version is the dominant telling of fairy tales today.  Children and adults can use fairy tales to create shared experiences of their own personal memory of the retelling of an old tale. The strong themes in fairy tales have given rise to many of our contemporary books and films – the princess who gets rescued by a prince (sic) is every rom com ever made.  The idea that evil will be vanquished and right will triumph runs through every adventure that we see on screen.  Fairy tales are simply tales that are part of our past and can be adapted and rewritten to form part of our future as well.’

Interestingly – for better or worse – Gerda, a girl, does the rescuing in Snow Queen. Most of the characters are women in fact, including of the Snow Queen herself of course.

Heather Robbins again: ‘Diane Purkiss recently said in Gramarye that she adored the Snow Queen, as “the idea of being able to see a beautiful woman made of ice through the window, and then being able to fly away with her into a world of deep cold enchanted me”, but the Snow Queen wasn’t one of my favourites as a child. The little bits of ice spelling out “eternity”, the very Christian overtones and moral directly from the Bible didn’t make any sense to me. I would have preferred Gerda to have solved some clever riddle to free Kai, or for all the people she’d met along the way to owe her a favour and come to the rescue at the very end – and then of course I would have wanted the Snow Queen to be terribly punished in the fairy tale tradition!’

Do you have a memory or association with the Snow Queen?

This blog was originally published on Snow Q Project‘s website on 17 August 2018.