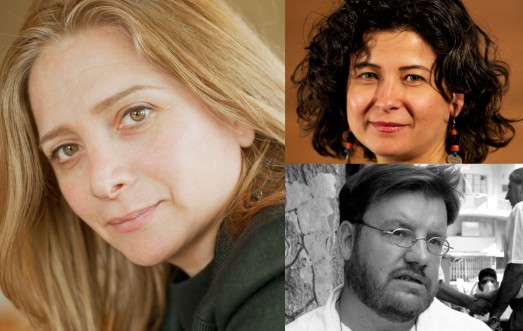 Join three leading writers from the Middle East as they debate the limits of freedom of expression in the region and beyond. Sinan Antoon is an Iraqi author currently living in New York, whose novels include ‘The Corpse Washer’ and ‘Ya Mariam’. Choman Hardi is a Kurdish poet whose family were forced to flee Iraq several times. Samar Yazbek is a Syrian writer and journalist now living in exile and recipient of 2012 PEN/Pinter Writer of Courage award.

The discussion will be chaired by Malu Halasa.

Presented by English PEN and British Council in association with Free Word Centre.

Malu Halasa is a writer and editor in London. Her books include: ‘Syria Speaks – Art and Culture from the Frontline’ (2014); ‘Transit Tehran: Young Iran and Its Inspirations’ (2009); ‘The Secret Life of Syrian Lingerie: Intimacy and Design’ (2008); ‘Kaveh Golestan: Recording the Truth in Iran’ (2007); ‘Transit Beirut: New Writing and Images’ (2004) and ‘Creating Spaces of Freedom: Culture in Defiance’ (2002). She recently wrote for and directed ‘Razor Sharp: Arab Women Tell It Like It Is’ for the 2015 Shubbak Festival.