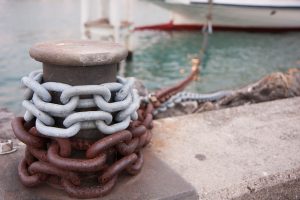 Jun 20, 2017 • No comments
I hear a big heavy chain rattle behind my back. A person dressed all in black – black hoody, black combat trousers, black combat boots – is standing in the middle of the office, swinging a long metal chain. I can’t see their face, the hood is covering it. I gasp, stop breathing. I’m totally defenseless – and alone. I’m closing my eyes, aware that my last moments might have arrived.

‘Are you coming?’ The Nymph’s voice. I blink, throw a quick glance around me. I can’t see Peirene anywhere.

‘Well, I’m not going to sit here. I’m ready to fight.’ Again Peirene. The black person begins to move towards the door.

‘It’s you!’ I shout out in relief. But the next moment I’m overcome by suspicion. What is Peirene up to?

‘I’m going to chain myself to The Guardian main entrance until they re-instate Nicholas Lezard’s weekly book column.’ Combat fire sparkles in the Nymph’s eyes.

I swallow. I too am upset that Nick’s column after 20 odd years is being axed from the Saturday Guardian Review section. This decision represents another blow to the UK book world. But Peirene’s plan doesn’t sound wise.

‘How about we write a letter to the Guardian’s editor-in-chief expressing our concern and see if we can mobilise support from other independent publishers,’ I suggest instead.

The Nymph agrees but insists that if our letter yields no positive result she will return to her original plan.

So I write a letter. This is what it says:

“Nick’s column enjoys an enthusiastic fan-base. It guarantees any book he reviews sales of between 300-500 copies. In today’s publishing climate this represents a rare achievement. From our experience, no other single review can deliver such impact. Moreover, Nick often pays attention to books outside the mainstream. He has, for example, promoted translated literature as well as titles published by small independent presses. In this respect, it is no exaggeration to say that his column serves the cultural health of our society. He plays a vital role in developing literary diversity in this country. Moreover, not only do Guardian readers trust Nick’s choice,  he has also helped make the Saturday Guardian Book Review truly distinctive. Losing Nick’s column might take away one small, but significant, reason for the fierce loyalty of your readership.”

Our letter is signed by nine other publishers. Peirene approves.

After a few days we receive a reply from Katharine Viner. The decision about Nick’s column is part of a number of changes in the Review section, she explains. And they will go ahead with them.

Peirene takes out her chain again. I don’t know what else to do to prevent her heading down to The Guardian. And so I let her go, hoping secretly and against reason that maybe her action might lead to some good after all. She’s back a few hours later.

‘No one paid any attention to me!’ she sighs. ‘Did you chain yourself up?’ I ask. ‘Not exactly. I just stood outside the Guardian looking unhappy. Very unhappy.’ She sniffs. ‘Such disregard for an ancient Greek nymph.’ She takes the rest of the day off to lie in a darkened room with a cold flannel over her face.

This blog was originally published as part of Peirene Press‘s series Things Syntactical. The Pain and Passion of a Small Publisher on 12 June 2017.