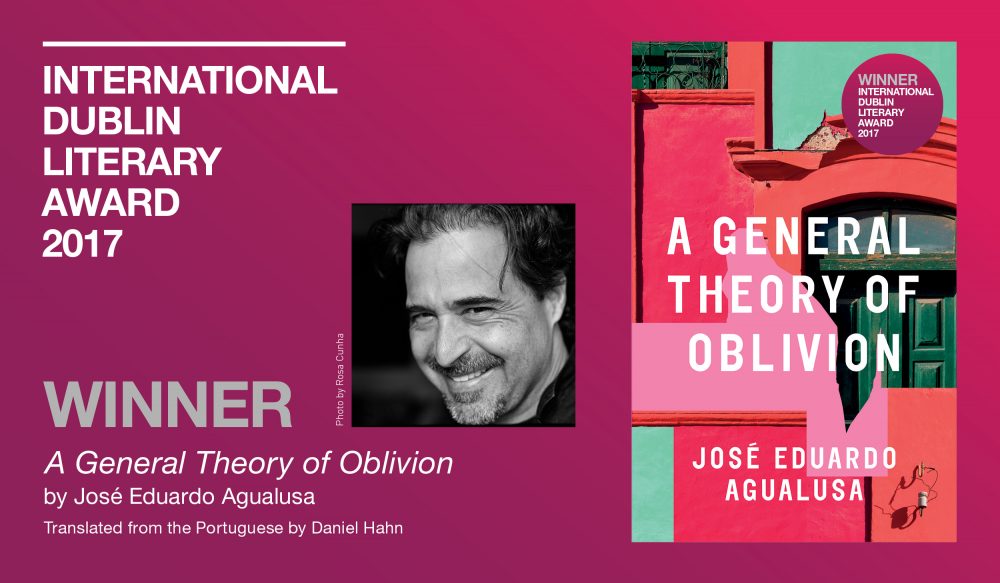 Angolan author José Eduardo Agualusa has won the 2017 International DUBLIN Literary Award for his novel A General Theory of Oblivion, translated from the Portuguese by Daniel Hahn. The Award is organised and sponsored by Dublin City Council and at €100,000 is the world’s largest prize for a single novel published in English.

Uniquely, the Award receives its nominations from public libraries in cities around the globe and recognises both writers and translators. The winner was announced at a ceremony in Dublin’s Mansion House today.

José Eduardo Agualusa was born in Huambo, Angola, in 1960, and is one of the leading literary voices in Angola and the Portuguese-speaking world. His novel Creole was awarded the Portuguese Grand Prize for Literature, and The Book of Chameleons won the Independent Foreign Fiction Prize in 2007. Agualusa lives between Portugal, Angola and Brazil.

The winning novel was chosen from a total of 147 titles, nominated by libraries in 110 cities in 40 countries. It was first published in the UK by Harvill Secker and in the USA by Archipelago Books. The shortlist of ten novels, as chosen by an international panel of judges, included novels from four continents. José Eduardo Agualusa is the second African author to win the prize in its 22 year history. Agualusa received a cheque for €75,000. Daniel Hahn, translator of A General Theory of Oblivion, received a cheque for €25,000.

A General Theory of Oblivion tells the story of Ludo, who on the eve of Angolan independence, bricks herself into her apartment, where she will remain for the next thirty years. She lives off vegetables and pigeons, burns her furniture and books to stay alive and keeps herself busy by writing her story on the walls of her home.

The outside world slowly seeps into Ludo’s life through snippets on the radio, voices from next door, glimpses of a man fleeing his pursuers and a note attached to a bird’s foot. Until one day she meets Sabalu, a young boy from the street who climbs up to her terrace.

Commenting on his win, José Eduardo Agualusa said: I’m very happy to have won the International Dublin Literary Award. A General Theory of Oblivion is a book about xenophobia and the fear of the Other. This theme couldn’t be more current. If my winning the prize contributes in some way to a debate and helps fight xenophobia, I would be even happier.

Daniel Hahn, who translated the novel from the original Portuguese, said one of the reasons we translators translate is because we want to bring books we love to new readers – we’re natural proselytisers, I think; so winning any prestigious prize is wonderful because is it helps to do just that, to draw more people’s attention to something we’re already so eager to share. That this particular prize comes out of the wonderful world of public libraries makes is all the more special.