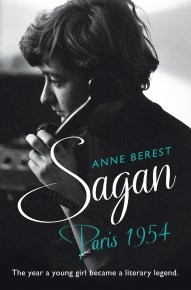 This intimate narrative charts the months in 1954 leading up to the publication of the legendary Bonjour Tristesse. The first novel by an 18-year-old author that had France’s literary establishment in uproar.

We encounter Françoise, her family and friends close-up, in a post-war world that is changing radically; and Mlle Quoirez, in her new guise of Françoise Sagan, will be at the heart of that social change.

Sagan was always focused on her writing, though at times the fame of her books was to be eclipsed by her wild-child reputation.

Yet, as Anne Berest herself testifies, Sagan’s fearless approach to life lived on her own terms remains an inspiration even now.

A portrait of French society in the 1950s, a delightful escapade, a hymn to friendship, a token of pure generosity – Le journal du dimanche

About the author
Anne Berest is a novelist and the co-author of How to be Parisian, wherever you are. She was asked by Sagan’s son to write a book to mark the 60th anniversary of the publication of Bonjour Tristesse.