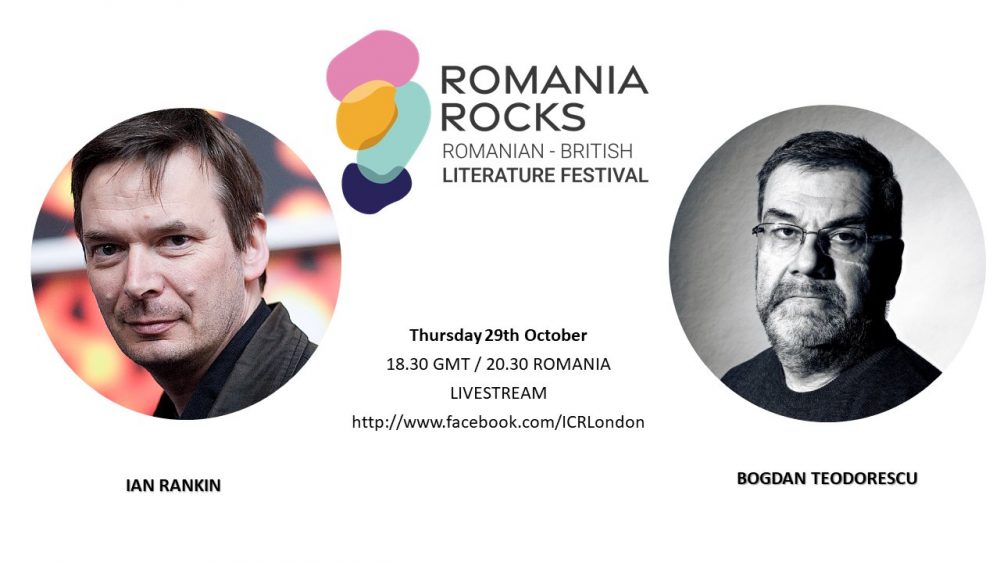 This “Rock Talk” was all about crime fiction: Rosie Goldsmith brought together Ian Rankin and Bogdan Teodorescu in a riveting conversation. Rankin, the UK’s number one best-selling crime writer, has just published A Song for the Dark Times, the most recent book in his ‘Inspector Rebus’ series, while Teodorescu, who is highly respected in Romania, has just had his first book translated into English with Corylus Books: the political thriller Sword involves numerous members of a fictitious Romanian government.

In Teodorescu’s novel, there is no detective and no central suspect: everyone is under the spotlight; these are the victims of politics and the media, as well as murder victims. “I’m interested in darkness, in the big masses,” Teodorescu told us: “I read everything that gives me an image of social reality”.

I drew the conclusion that a crime writer necessarily has to be bold, as Teodorescu is: crime is so widely read, I think, because people want ‘hot topics’.

Rankin confirms this: in his Rebus novels he is interested in racism, illegal immigration, and prostitution. Yet he also sees himself as something of a tour guide: he was “interested in crime,” he explained, “because I wanted to explore Edinburgh from top to bottom”. He considers his work set in Edinburgh as a ‘microcosm for Scotland as a whole,’ which allowed him to discuss the nation’s politics and society. In fact, he cites Scotsman Robert Louis Stevenson as a major influence, the concept of the dual Jekyll and Hyde characterising many of his characters. What was originally meant to be one Rebus book became a series which, in Rankin’s own words, only got better and better, and thus 23 more Rebus books later, more popular: with persistence, the reputation of the series grew through word of mouth, and only later through awards and marketing campaigns.

From the conversation, both authors revealed that they have been productive this year, each writing a book about the pandemic. I look forward to the publication of the second volume in English translation of Teodorescu’s Tetralogy of Manipulation next year. As a writer myself and at the beginning of my career, I greatly appreciated Rankin’s willingness to speak candidly about the difficulty of ‘making it’ as an author, and feel that any writer of prose, regardless of genre, can take something useful away from this discussion on crime fiction: courageous topics are the road to success.