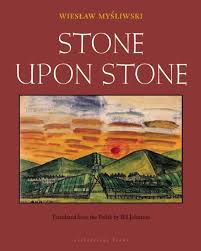 Szymek Pietruszka is building a tomb. His parents are already buried; two of his brothers have abandoned the family’s rural village years before; and Szymek himself is unmarried and childless. Yet he is still determined to build a burial chamber that honours the Pietruszkas. His efforts form the foundation upon which is built this hefty tome (pun intended), considered Myśliwski’s greatest literary achievement.

Yet this tomb-building is not, like Proust’s madeleine, a trigger for remembrance; nor is Stone upon Stone a study of the nature of memory. Instead it is an exploration of how human experience is created. “On stone a stone / And on that stone / Another stone” goes the folk song that forms the novel’s epigraph, and so Myśliwski creates a picture of Polish rural life as it suffered the seismic changes of the mid-20th century. We learn about slices of bread cut on Christmas Eve, to be placed under the blade at the first ploughing of spring; of Szymek’s preference for thatch over a metal roof; of how the new, metalled roads and rubber tyres have changed the sound of carts returning from a day’s harvesting.

While all this is viewed through the eyes, and the captivating voice of just one man, the novel affords an epic sweep. It is this apparent paradox that provides us with such a powerful vision of Polish life. For example, Szymek weaves together his memory of a long, hot childhood pilgrimage with lynchings he witnessed during WWII. Both events occur on the same stretch of road. Both are described simply, as if Szymek is resting on a bench, talking to a passerby.

It is through his choice of narrative voice that Myśliwski’s genius is revealed. While his subject matter could be compared to Turgenev’s or Zola’s weighty studies of rusticity, he doesn’t treat us to any objective analysis of the peasant character, of the nature of the common man. And he studiously avoids any self-conscious metaphor. But the novel is, nevertheless, deeply metaphorical. While the characters nod their heads to the after-life – praying and going to church – what is vital is the present: good growing weather; accidently stepping on a newly-hatched chick; the prospect of a loving embrace and a knife-fight at a dance. And it is in this most subtle of ways that Myśliwski reflects the effect on Poland of its postwar shift to a political philosophy based on materialism.

While communism is never named explicitly, it represents, to borrow Myśliwski’s symbolism, one of the cornerstones of the novel. Comparisons are regularly made between the pre-war ‘peasant’ era and the collective farms that replaced it. Another cornerstone – the keystone, in fact – is Szymek’s use of language. Myśliwski moves from limpid metaphor to elegant metafiction. His prose – word upon word,  sentence upon sentence, paragraph upon chapter – is a beautifully constructed edifice. Reading the novel is for me like standing in a perfectly designed building.

I know no Polish so praise is due to the translator Bill Johnston who had to pull this beautiful Polish structure apart and rebuild it block by block in English so that we could appreciate what I believe is one of the most impressive novels of the 20th century.