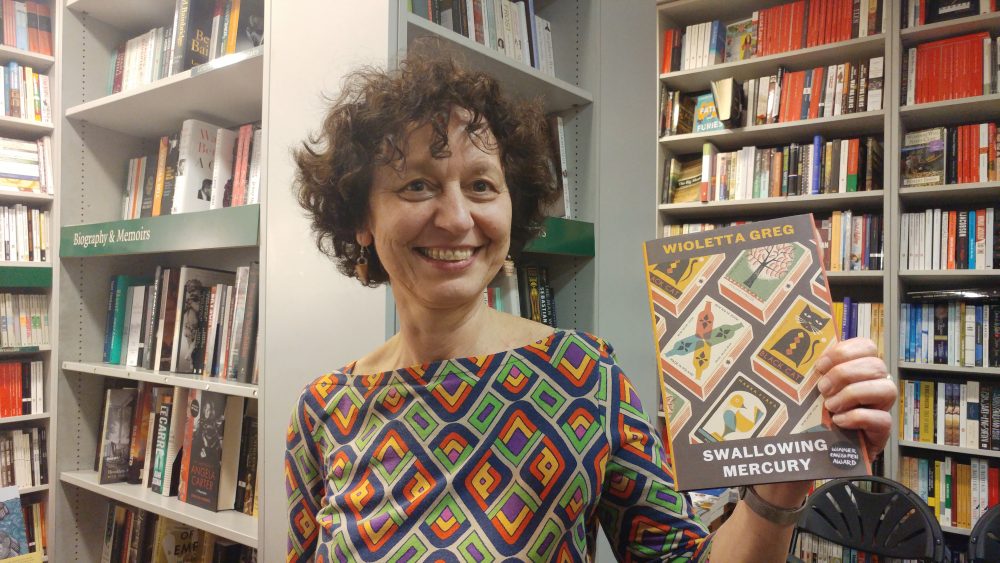 Having made her name as a poet in her native Poland, Wioletta Greg has more recently turned to writing prose. In Notatnik z wyspy (“Notes from an Island”, Czarne, 2012) she reflected on her recent experience of relocating to the UK. By contrast, in Swallowing Mercury (“Guguły”, Czarne, 2014) she has returned to the small village in Poland’s Jurassic Highland where she grew up during the dying decade of communism. “Guguły” was nominated for two major literary prizes.

Wioletta Greg may have simplified her original surname, Grzegorzewska, perhaps to spare her English readers, but she sacrifices no subtlety or complexity in her portrayal of village life in the dying days of communism and the early years of democracy. And Marciniak’ s translation allows Wioletta Greg’s original and often specifically local language and poetic imagery, to breathe and sparkle in English with a wonderful lightness of touch.

This slim book, just two dozen short chapters, is a coming-of-age story, clearly based on Greg’s life: the narrator, Wiolka, shares her name with the author. Nevertheless, Swallowing Mercury should not be read as a melancholy revisiting of a childhood. As the author herself has pointed out in an interview, it is also a “critique of a provincial world in which all otherness is dangerous”. This is a world where old customs, such as women getting together to tear feathers for eiderdowns, survive alongside socialist collective farms, and belief in the bebok monster happily coexists with Catholic traditions. Wiolka dutifully attends church but, instead of praying, she watches “a mouse wander around the intricate labyrinth of gilded stucco decorations”. When, in one of the book’s many hilarious passages, she enters a painting competition, “Moscow through your eyes”, she hands in her picture of the Kremlin defaced by a huge ink blot, not realising how the political implications would land everyone in serious trouble.

Key political events – the imposition of martial law or the Pope’s visit to Poland – make an appearance, but the book is also packed with wonderfully quaint details, such as hairbrushes stored in a cocoa tin, and the collecting of matchbox labels. We follow Wiolka’s sexual awakening, including some attempted child abuse, as well as glue sniffing and running away from home. However, Wiolka’s inner world and budding artistic imagination are at the core of Swallowing Mercury: a hallway is transformed into the belly of the biblical whale, and the kitchen table pulsates with “woodworms playing dodgeball using poppy seeds that had fallen from the crusts of freshly baked bread”.

The story teems with a host of idiosyncratic characters: there’s Gienek the drunken combine driver whom Wiolka rescues from the ditch, Tadek a.k.a. Zorro, the pickpocket, and Natka the tart from the Baboon nightclub. Most memorable are the portrayals of the girl‘s closest family members: the grandfather with his wartime stories, the hard-working mother terrified of thunderstorms, and, first and foremost, the tragic figure of the father, a draft-dodger and hobby taxidermist.

Wioletta Greg’s forthcoming book, Stancja, due out in Polish in July 2017, is set to continue where Swallowing Mercury ends. It will be worth waiting for.

Julia Sherwood is a translator based in London and editor-at-large for Slovakia with the international translation journal Asymptote.