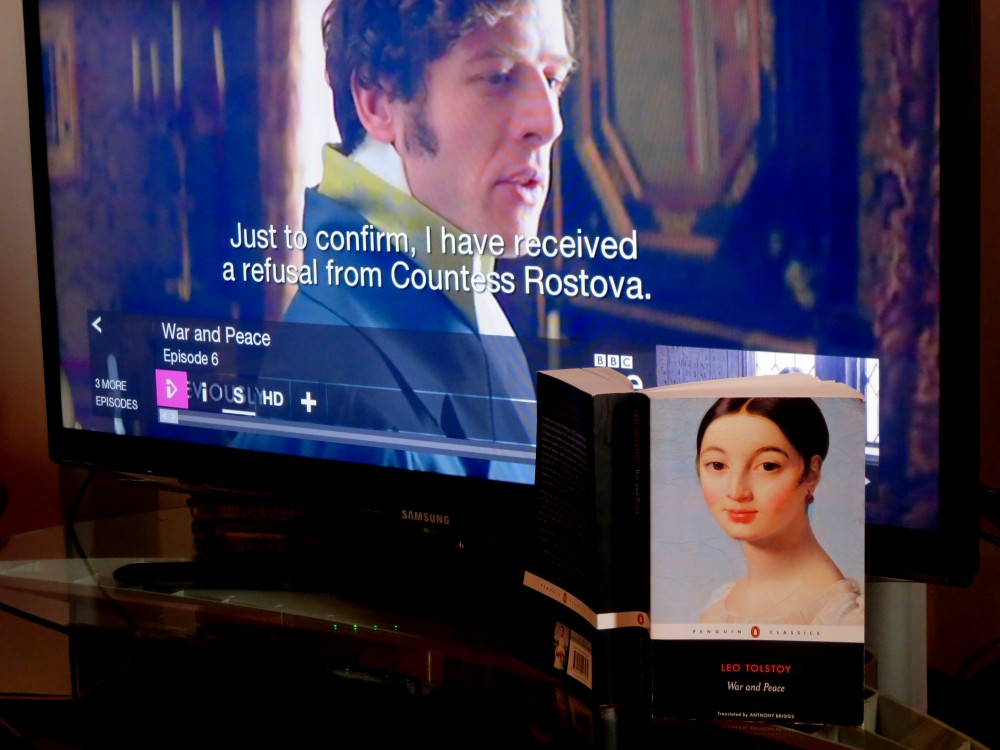 You’ve seen the BBC TV series of War And Peace and now you’re feeling bereft – so why not read the book? I’ve actually been dipping into my copy, all 1400 pages of it, whilst watching the TV series and it’s been a wonderful companion, elucidating and enhancing the condensed but brilliant televisual version with its vivid images, narrative and characterization. Yes, I’ve liked Andrew Davies’ adaptation very much but the novel I love. And I’ve loved it even more since I met the Penguin translator of War And Peace, Anthony Briggs, a few years ago. Tolstoy was not around to sign my copy but Tony Briggs did – and it is a treasured possession. During a long chat with Briggs about his translations of Pushkin and Tolstoy – he is the only Russian translator to tackle both these giants in English (NB. Pushkin Press has just published his latest translation of Yevgeny Onegin), I was struck by Briggs’ great humanity, humour – and apologies for the alliteration – his humility. How was it possible to have spent over fifty years at your desk with these giants and emerge sane? I’ve met some wonderful translators in my time – my admiration knows no bounds – but some, like Briggs, are touched by greatness. Without them there would be no War and Peace in English, no BBC TV series; no Madame Bovary, Metamorphosis or Tin Drum’… Over the decades there have been some major translations of Tolstoy and Pushkin in English but Anthony Briggs’s translations have an incomparable modernity, lightness of touch and joy in language. So this #RivetingReview is more of a #RivetingInterview as I’ve turned to my original conversation with Tony Briggs in 2012, to hear what he himself says about a life spent translating Pushkin and Tolstoy: AB: The translation of ‘War and Peace’ took two solid years, working 9 till 5 every day and early on we evolved a special way of doing it. By day I would translate a chapter of ‘War and Peace’ and come down in the evening and stick it on the sideboard; the following morning my wife Pam would pick up the translation – this was our breakfast ‘serial’! – and Pam would read it to me so that I could hear what it sounded like. I thought this was a really good test of how fluent and normal and natural a translation should be. You see, there are two antithetical schools of translation. One is that you must be very strictly literal, otherwise you are letting down the wonderful language that you are trying to represent, and also a great writer. I never believed in that at all. Nabokov for instance is completely wrong on this because it can only ever produce a kind of stilted form of English, which doesn’t quite sound the way that ordinary English does. So my wife and I evolved this way of her reading the translation back to me, and from that we perfected it. Now this means that my aim in translating ‘War and Peace’ was first of all to produce a text that would read naturally and spontaneously to an English reader, the way that a Russian would read it, without any hiccups of any kind. Now it is true that this takes you slightly further away from the original Russian than the literalist would approve of but it doesn’t take you a million miles away – you don’t allow yourself abnormal latitude. You simply make sure that the English sounds like normal, natural English.

RG: Let’s talk about previous translation of ‘War and Peace’. In 2005 came your translation, 2006 the next translation. Before that the main English translation was by Constance Garnett?

AB: Yes. It hadn’t been translated for two generations which is one reason I wanted to. There were seven or eight previous translations into English. It’s all rather interesting because all of them were done by women. And I can’t help thinking that – and it’s difficult to say this without appearing old-fashioned and sexist – but probably they have a slightly different flavour because, it’s not just that I’m a man but I’m also much lower class than the elegant ladies who did all the earlier translations, and I’m also from the north of England, so there is a kind of rough pragmatism about the way that I speak and write, which I hope is not uncultured, or unliterary, but it’s got a kind of more direct strength and plainness about it. Some people have criticised that and said it’s a kind of colloquial distortion of the original, but it’s certainly not meant to be that at all. It’s simply to produce English which is vigorous and direct and immediately enjoyable.

AB: With Pushkin and Tolstoy you couldn’t have two greater extremes. There’s one sentence in ‘War and Peace’ which is 260 words long. That poses a problem for the literalists because I’ve looked at all the translations and not one of them produces a sentence in English of 260 words. All the translators break it down into at least 3 subsidiary sentences and they’re all long! But that aside, when you get down to Pushkin, I do not exaggerate when I say that the exquisite nature of Pushkin’s verse is such that in line after line you realise that you couldn’t move a single phoneme, a single letter, without altering the very fine fabric. For instance, you get a run of banging, hard consonants and then suddenly at the end you move into a very soft consonant. One consonant can alter the tone of the whole thing. Pushkin’s use of language is so exquisite that it’s just an enormous pleasure to translate. You can hardly believe that you’re being paid to do it. You know just to get in the middle of a wonderful language and just play around with it. It’s not a very demanding challenge. There are no difficult concepts to get hold of but you see, even Pushkin’s prose has got such poetic quality that you’ve got to try and infuse that to some extent if you possibly can. (NB. Anthony Briggs had just translated Pushkin’s Queen of Spades for Pushkin Press when this conversation took place.)

RG: So for all your translations you go to the original Russian. Do you also, in preparation, read other translations?

AB: That’s a good question. When I was doing ‘War and Peace’ I didn’t dare go anywhere near any other translation to begin with. I thought I’d either pinch things or borrow them or come under their spell or something but after a while I gained in confidence. I got to points where I was thinking, this is particularly difficult, I wonder what the others made of it. And invariably I found that they’d had the same difficulty I was having and something had to be compromised and away we went. So after that I didn’t dip in every day but now and again I would have a look at the other translators because I realised that my translation style was in fact completely distinctive and quite different from theirs in many ways and I could be completely confident about it. And you run the whole gamut of experience. There was once when I was reading about Napoleon in a history book and they described his horse as ‘caparisoned in purple’ – and that’s exactly the phrase I needed for ‘War and Peace’, because I was writing that Napoleon’s horse was ‘wearing a purple saddle cloth’ – or something like that – so I deliberately pinched that, not from another translator but from an historian. And there was another occasion when there was a general phrase in Russian, ‘the regular mechanically noise of the lathe’, and I thought what it would sound better in English as ‘the steady hum of the lathe’. Then I looked at what two other translators had written and they had concluded the same. So, those are the little thrills that you have, comparing your version with theirs. It’s just an exquisite pleasure!

AB: It makes you buoyant and optimistic and just delightfully satisfied with the human condition. That you’re so pleased that human art can achieve such pinnacles and give so much pleasure to so many people and represent the human condition so accurately. So when we go to Stratford and we’re moved by a Shakespeare play and we come away and we’re hearing in our head, ‘all the world’s a stage and all the men and women merely players, they have their exits and their entrances’ – it’s just like that when you’re working with the works of Tolstoy and Pushkin: these are the greatest artefacts that have ever been produced in human language and to spend a lot of time with them just leaves you buoyant, and optimistic that life and art can be so good and so pleasurable.