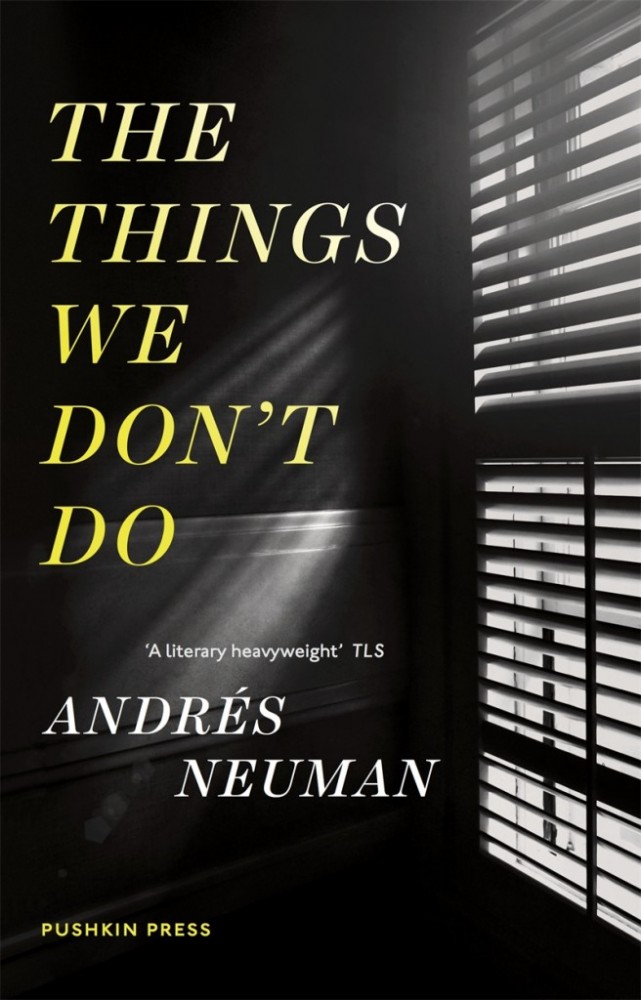 #RivetingReviews: John Munch reviews THE THINGS WE DON’T DO by Andrés Neuman

The Things We Don’t Do

Translated from the Spanish by Nick Caistor and Lorenza Garcia

Published by Pushkin Press (UK) and Open Letter (University of Rochester NY, US)

That Andrés Neuman has yet to become an undisputed fixture in the upper tier of the international fictional mass market hardly amounts to a criticism of his abilities. Indeed he has been garlanded with sometimes extravagant plaudits in the rich undergrowth of the Anglophone and Hispanic critical literocracy. Perhaps his best-known work Traveller of the Century, which appeared in 2012 and was his first to be translated into English, was dubbed (approvingly) by one reviewer as a genre-bending, unpredictable and omnivorous monster of a work. A storied Chilean writer, the late Robert Bolaño, went even further, declaring that the literature of the 21st century will belong to Neuman and to a handful of his blood brothers.

Having just turned 39, the Buenos Aires-born Neuman is now beyond the stage of promising prospect. Whether he scales the vertiginous heights some critics forecast is moot. What is certain is that his oeuvre, incorporating poetry and aphorism as well as the multi-layered traditional Argentine form of total novel, carries an implicit kite mark assuring the reader that here is an author of high ambition and high quality.

His latest book is the antithesis of grandiosity. It’s a series of short stories, varying in length from the well-trimmed to the totally fat-free and including some so short that they are as much haiku as prose. All share an almost cinematographic lucidity and immediacy. In one story a wife in a deckchair under a purple sun draws a straggly line in the sand (literally) and commands her husband not to cross and then sternly defies his protestations. Her stand marks a stunning caesura in their relationship, sketched in eight pages with not a surplus explanatory word.

In another, an impressionable young boy responds to the taunts of the alluring Anabela, a few years older than him, to swim the 2km from the beach to a dry rock in spite of stringent parental warnings never to do so. It was worth having her having her laugh at us, because her shoulders went up and down and the light green material [of her swim suit] moved inside as well, the boy ruminates.

Themes explored in Neuman’s long-form writing – notably the shape-shifting dynamics of relations between partners and between psychiatrist and patient – recur here in concentrated form. The story of the book title is based on the gnomic assertion of one partner: I like all the proposals, spoken or secretive, which we both fail to carry out. There’s even a mordantly humorous story, that appears to be in scarcely disguised autobiographical form, of how Neuman’s Germanic surname originated through his Jewish ancestors on his father’s side in Tsarist Russia.

Given its format, this is a work that is an ideal starting point for those not yet acquainted with Neuman’s work – as it was for me, a Neuman-newcomer.