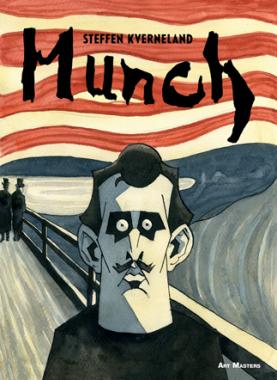 Comic books struggled for years to shrug off the charge that they were irredeemably trivial. No more. Art Spiegelman’s Maus: A Survivor’s Tale, a unique retelling of the Holocaust, based on his father’s recollections of internment in the Auschwitz death camp, was the change-maker that lifted the genre on to a higher plane of cultural acceptance.

In Spiegelman junior’s Orwellian recasting, Jewish concentration camp victims are portrayed as mice and Germans and Poles as cats and pigs. A collected volume of his Maus comic strips won a Pulitzer Prize in 1992; the first graphic “novel” to earn such an accolade. From then on, no one could convincingly claim that the comic sector had an exclusive obsession with fictional square-jawed super-heroes and tales of intergalactic annihilation.

To some extent this modern-day “Munch” is a long-term beneficiary of that Pulitzer award, since it broadened the range of what subjects could be respectably included in comic books. It’s also a symptom of the general vigour and innovation of comics and graphic novels today.

Strictly speaking, Munch is a graphic biography, so it is tethered to the “facts” of a lived life. But there is so much that is hallucinatory, Rabelaisian and idiosyncratic in Edvard Munch’s own experiences that the lines between fantastical imagination and evidential reality blur without difficulty. That makes the life of the celebrated Norwegian expressionist painter and printmaker a near-perfect subject for graphic illustration.

Early on in the book, Steffen Kverneland, the author and illustrator, establishes a visual vocabulary, both hilarious and grotesque, in laying the groundwork of the friendship between Munch and the melancholic Swedish dramatist August Strindberg. Munch, his face a livid yellow and black-eyed scowl, is shown cigarette in mouth, smoke rings of outrage furling up from his brow, declaiming: “I hate everything and everybody but myself.” A chastened and wary yellow-eyed Strindberg responds: “You are lucky. I hate myself as well.”

Of course no review of Munch would be worth its salt unless it touched on Munch’s emblematic work ‘The Scream’ which Kverneland renders wonderfully well. He produces a fascinating kaleidoscope of photographs-cum-drawings to illustrate where Munch may have found the vantage point and location for his best-known painting. Kverneland also does a marvellous job of replicating Munch’s actual work. Whether proto-Expressionist, or combined-photograph-and-illustration, or ultimate-vulgar-Viz style, his illustrations are luminously brilliant throughout.

Translated from the Norwegian by Francesca M. Nichols