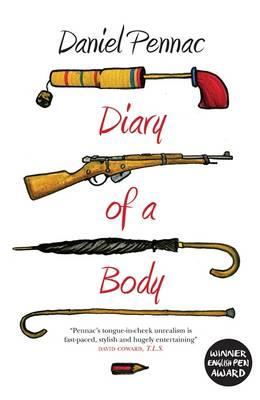 Right at the outset a full critical bias disclosure is in order: when this book landed on my desk my spur-of-the-moment reaction was negative, not least because Daniel Pennac’s creation had been hailed in some quarters as a Gallic Adrian Mole: Oh no, not another programmatic, spotty-faced comic vehicle with only the barest resemblance to lived and felt reality. (Further bias disclosure: I have never read Sue Townsend’s massively successful work or any of its succession of sequels.)

Yet Pennac’s narrative, slowly at first and then with increasing pace and conviction, disabled such prejudicial instincts. From his initial litany of pre-teenage anxieties – Maman, mirrors (really?), friends (?), insects (OK, that’s allowable), pain (yes, of course), fear of soiling himself (well it is a diary of the body) – to the ageing of the 86-year-old protagonist “in his jeans”, this is a glorious bran-tub of trepidation, which is humane, humorous and utterly grounded in a framework of believable happenings.

In a real sense the title tells the reader all he or she needs to know. It is a no-holds-barred account, by turns scatological (our hero records the production of a “perfect turd”), urinary, penile and masturbatory, but is invariably told with such élan and humour that it avoids any suggestion of a kooky fixation with bodily functions. An old man, he notes at one point, has a “tumescent conk” which is “an amazing source of amusement”.

Not all the book’s bodily references are by any means carnal. In fact the single-most excruciating recollection is our hero’s sneezed expulsion (after several attempts) of a polyp, which he feels as a “soft impact in the hollow” of his hand and which unblocks his left nostril. Further nosebleeds and an account of a series of “packings” of the sinuses to plug the bleed may induce more sharp intakes of breath than any other description in the book.

This bodily preoccupation can even be poetic, particularly when a diagnosis of shingles is followed by a case of “meadow dermatitis”, an appealingly rural affliction in which the hand is covered by a carpet of abominably itchy pimples. But for every affliction, Pennac offers a humorous antidote. He muses at one point that “conspicuous farmers, pissers and burgers exasperate me more than sneaky ones”. Who are we to disagree? Read John Munch’s reviews of Things We Don’t Do by Andres Neuman and Messages From a Lost World. Europe on the Brink by Stefan Zweig.

Diary of a Body

Translated from the French by Alyson Waters