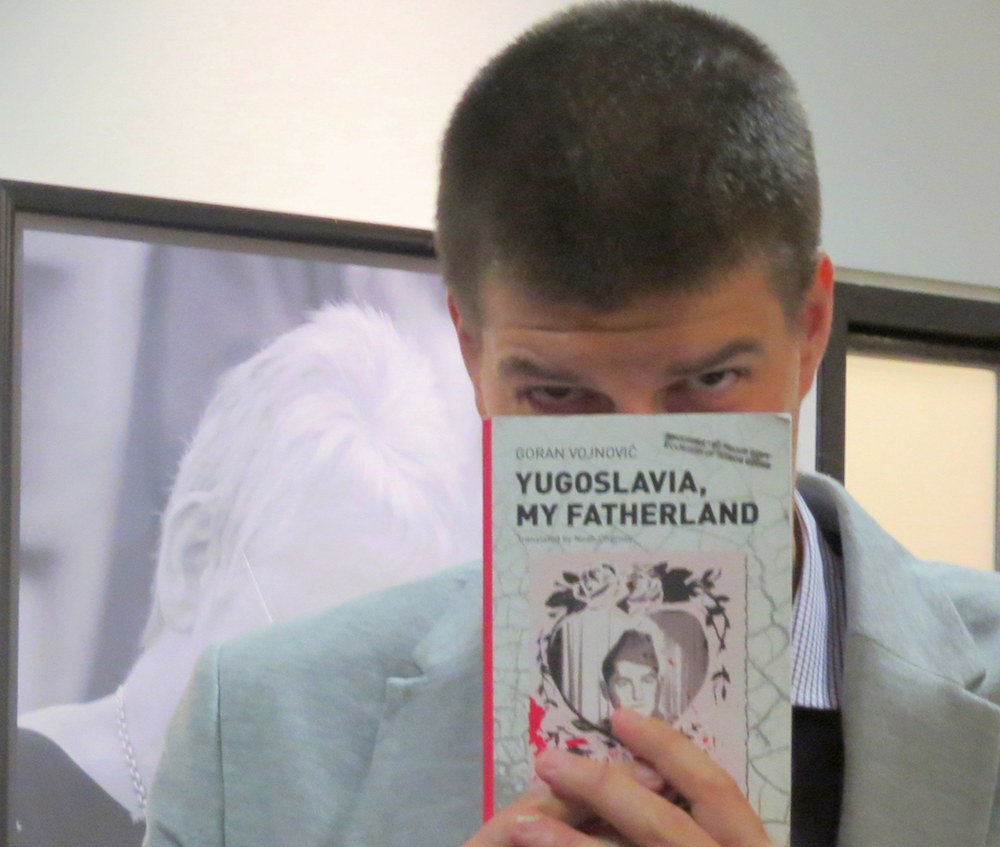 During my twenty years working in BBC Foreign Affairs, I knocked around pre-1989 Eastern Europe, the Balkans and Yugoslavia a lot – and then post-1989 ex-Yugoslavia and all the other little and big countries that they became. I continue to be fascinated by how all these changes are remembered (or not) and how they are portrayed in fiction. 20 Years ago the horrific Yugoslav Wars were officially ended by the Dayton Agreement but, seen from here and now, the divisions are still deep and the problems of peace and reconciliation still enormous. Please, let us not forget: 140,000 dead; mass scale war crimes; genocide; rape; ethnic cleansing – on our European continent.

Goran Vojnović, a gifted young poet, writer and filmmaker from Slovenia, has just published his first novel in English, Yugoslavia, My Fatherland (Jugoslavija, Moje Dežela) although he is already a household name in Ljubliana for his daring 2008 novel (also filmed) Čefurji raus! (roughly = Southern Scum Go Home!) which was written in funny, fruity ‘street Slovene’. This, his second novel, is more literary but still funny and inventive. It is also a psychologically profound and successful attempt at describing the wars and the aftermath through the riveting story of one traumatized family. Vojnović and his generation are often called ‘post-Yugoslav’ writers with their hearts and brains in their ‘new’ countries but nostalgic for the relative peace and prosperity, linguistic and cultural unity before the wars – just like his main character Vladan in Yugoslavia, My Fatherland. Like Vladan, Goran was ten in 1991 when war broke out – the rest, he says, is fiction. On ‘that fateful day’ in 1991 when the news was unwinding on the TV, the narrator Vladan Borojević tells us my childhood suddenly ended. He is an only child leading an idyllic and unencumbered childhood. On that day he watches his father walking away slowly, face blank; he knows that something was horribly wrong.

From the perspective of today looking back Vlad then describes how his father, a General in the Yugoslav People’s Army, disappears and how he and his mum Dusha become fugitives. Vlad loses all capacity for love or happiness. He is told his father is dead but as an adult after the war, trawling the internet, he discovers an indictment by the Hague Tribunal against General Borojević: My father is a war criminal. Vlad himself then feels as if he is in the dock judged by the self-righteous, and, I thought countless times that his crime was my crime. He journeys back through his memories and through former Yugoslavia to find out the truth about his father.

This novel is dark, deep and disturbing. Vlad is estranged from his mother, who he calls ‘the Terminator’. In modern-day former Yugoslavia ethnic, social, cultural, political and language tensions are rife – and in Vlad’s own unhappy life. His family home is inhabited by Croats; whole villages have been emptied; he doesn’t know which language to speak. The bleakness of this story is redeemed by the searing honesty, un-sentimentality and insight of the storyteller. There’s also a wonderfully wild wordiness and exuberance to his language. His sentences are long and dense and sprinkled liberally with commas and sub-clauses, which is surely hard to translate. This style and language may be one reason that the translation does not match the excellence of the storytelling but still the power of this novel shines through.

Yugoslavia My Fatherland is about stories: the characters all tells stories, lies, embellishments; stories to survive the past, to help build new lives. Vladan says ultimately, I didn’t want to be part of this story but I wasn’t sure I could get away from it anymore… I was trapped among the bodies of innocent people and their executioners.