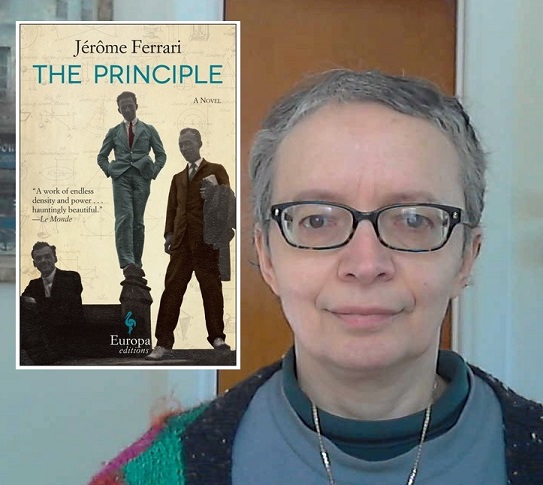 A teacher of philosophy fascinated by quantum physics, the French author Jérôme Ferrari is the perfect person to write this autobiographical novel of Werner Karl Heisenberg (1901-1976), who won the Nobel Prize in physics in 1932 “for the creation of quantum mechanics”. Indeed, what is ultimately at stake in quantum theories is a question of language and the limitations of language in describing reality. Hence, an ideal topic to bridge science and literature, which Ferrari does masterfully in The Principle.

The book opens in Helgoland, where the German physicist first formulated his famous Uncertainty Principle: the more precisely the position of particles are determined, the less precisely their momentum can be known, and vice versa. The novel is comprised of four parts, all related to this principle: Positions, Speed, Energy, Time.

That vertiginous eureka moment when Heisenberg grasped the beauty of form, as if accessing the source of God’s creative acts, contrasts sharply with what this discovery will eventually lead to, the creation of the atomic bomb and its ‘un-creativeness’. The physicist is portrayed as somewhat idealistic. The vertigo of beauty and the vertigo of horror are never far apart in the novel.

The author takes on the role of the subjective narrator and addresses himself directly to Heisenberg, which helps counterbalance the raw and graphic details about World Wars I and II and the gravitas of a panoramic novel covering much of the 20th century. This allows some personal and even humorous elements, and livens up the narrative. For instance, the uncertainty principle is applied to different aspects of life – Heisenberg’s love life – thus diffusing some of the tension. But for me as a reader the lyrical and mystical vocabulary served less to amuse me but more to heighten the violence and intensity of some of the scenes.

The controversy over Heisenberg’s choice to remain in Germany under the Nazis is still debated today. In the novel, Ferrari tends to present Heisenberg’s decision as positive, his ambition to write a good story, not to lift the veil on the ambiguity of the scientist’s activities, namely was he a Nazi collaborator or was he trying to sabotage their nuclear programme?

The novel is well researched, based on Heisenberg’s autobiography and correspondence, and actual quotes. It’s all very informative about the physicists of the day (Planck, Sommerfeld, Pauli, Bohr, Einstein, Schrödinger, Hahn, etc.) and about their discoveries and Germany during WWII. The time ten German phycisists, including Heisenberg, were detained at Farm Hall near Cambridge in 1945 (during Operation Epsilon), is a very important passage in the novel, based on classified recordings and released for the first time to Ferrari for his research.

However, the style of writing requires some effort on the part of the reader, with the long sentences, carefully chosen vocabulary and numerous metaphors to convey the immateriality of the substantial world or the substance of the immaterial.

In 2012 Jérôme Ferrari wrote The Sermon on the Fall of Rome depicting the fall of Rome and won the prestigious Prix Goncourt. In The Principle he focuses rather on the fall of man at his own hands. I was impressed by the beauty and depth of this short, dense book on the ultimate human choice. Are the last post-apocalyptic pages written on Dubai (where Ferrari taught philosophy) prophetic, or do we still have time to escape solitude and despair, and opt for beauty?

The Principle (Le Principe)
By Jérôme Ferrari
Translated from the French by Howard Curtis
Published in English by Europa Editions (February 2017)
A French native literary translator, Emma Cazabonne blogs at Words And Peace about world literature and her passion for books in general. Her Twitter account is @wordsandpeace