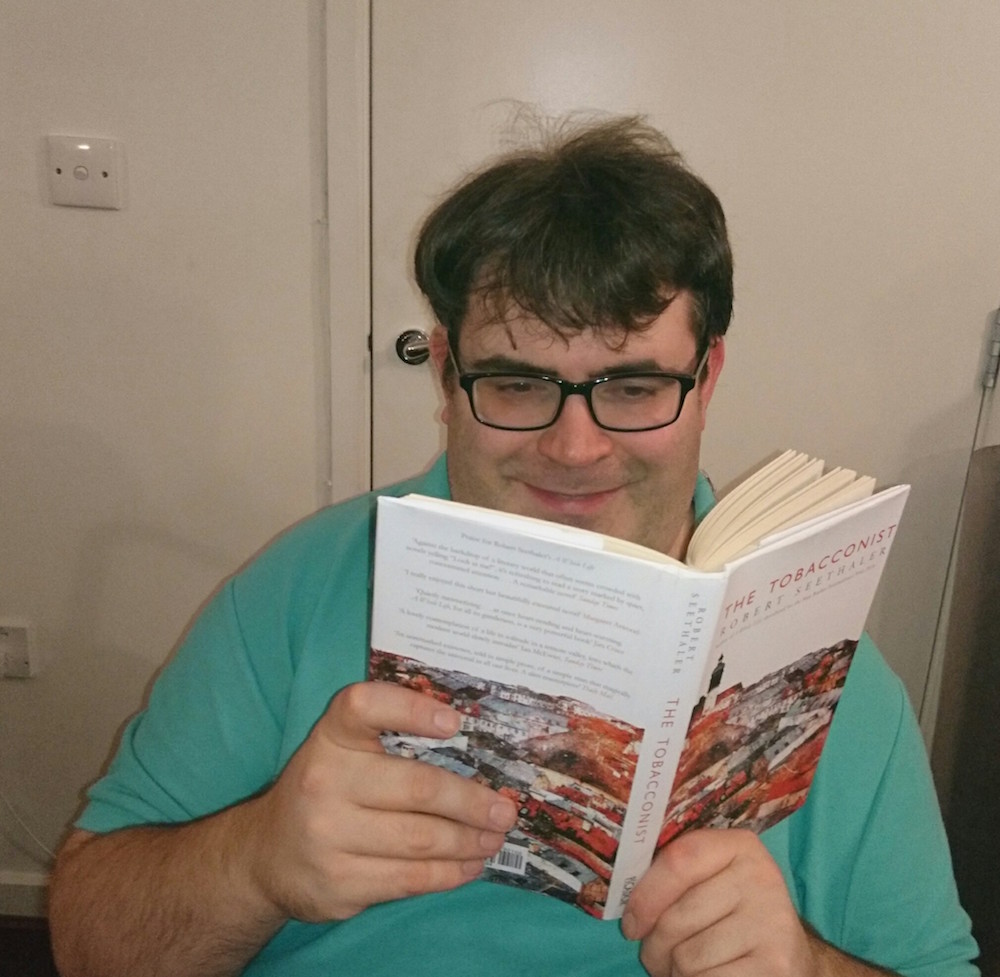 Anglophone readers were introduced to Austrian novelist Robert Seethaler’s work in 2015 with A Whole Life, his short novel about a man of the Austrian mountains, which was shortlisted for the Man Booker International Prize. Now we have a second Seethaler title in English, once again translated by Charlotte Collins. The Tobacconist was published in German immediately before A Whole Life, so we’re approaching Seethaler’s career backwards in English, but it’s possible to see some common themes and a similarity of tone.

One commonality is a strong sense of place. The protagonist of A Whole Life had the mountains in his bones; likewise, 17-year-old Franz Huchel in The Tobacconist carries the mud of the Salzkammergut, Austria’s Lake District, wherever he goes. In 1937, when his mother’s benefactor dies in a freak accident (struck by lightning while swimming in a lake), Franz has to leave his home in order to make a living. His mother sends him to the city of Vienna in order to become the apprentice to an old friend, the tobacconist Otto Trsnyek.

The city is a whirlwind to Franz:

“The city seemed like the vegetable stew on Mother’s stove. Everything was in constant motion; even the walls and streets seemed alive, breathing, bulging. It was as if one could hear the groaning of cobblestones and the grinding of bricks. The noise – there was an incessant roaring in the air, an incomprehensible jumble of sounds, tones and rhythms that peeled away, flowed into each other, drowned each other out, shouted, bellowed over each other. And the light. Everywhere a flickering, a sparkling, flashing and shining: windows, mirrors, advertising signs, flagpoles, belt buckles, spectacle lenses.”

I love the language of that passage: the way the list of sounds is so full yet still imprecise, so there’s nothing for us (or Franz) to grab on to; the light sources of different sizes, as if to suggest that there’s no escape from the glare, even in the smallest space.

However, Trsnyek’s shop is a kind of refuge from the outside world. The tobacconist knows what his customers want, more than they do themselves. Much of Franz’s work involves reading the newspapers, so as to guide each customer to the paper that’s right for any given moment. As for tobacco, Trsnyek is clear that people buy cigarettes out of habit, but are looking for a deeper sensory experience from cigars. He doesn’t need to smoke in order to reach this conclusion, he knows that it’s about more than just selling products. As he tells Franz, “A good tobacconist sells enjoyment and pleasure!”

In other words, being a tobacconist involves gauging the mood, anticipating needs, picking up on social signals… things at which Franz is not too experienced. He has a lot to learn. Franz falls in love with Anezka, a pretty Bohemian girl whom he meets at the amusement park, but it’s soon clear that he is out of his depth. There is one customer at the shop who can help him, though: Professor Sigmund Freud, now in his final years. Freud may have reached a point in life where he wonders why he ever wanted to try to understand other people, but the world is only just opening up for Franz and it’s a delight to watch the relationship of this unlikely pair develop over Seethaler’s novel.

Of course, we know what is around the corner at this time and place in history. This is where we can see another similarity with A Whole Life – major events being experienced from a distance. In The Tobacconist, it starts with an anti-Semitic slogan being daubed on Trsnyek’s shop, but eventually the Gestapo come calling. The Nazis’ rise is largely a mystery to Franz and its consequences erupt into his life in flashes that disturb the novel’s placid surface. Seethaler’s book becomes the quietly powerful tale of a young man who has the whole world to discover – as long as it doesn’t discover him first.

Translated from the German by Charlotte Collins