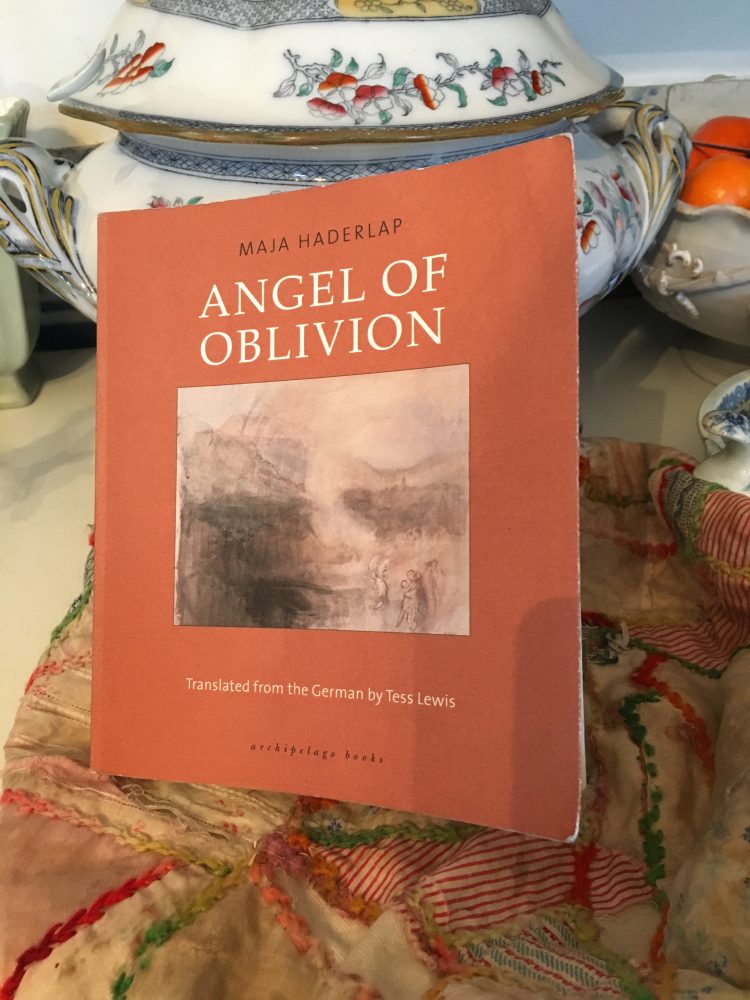 As we approach the end of 2016 there are very few things to be grateful for and a visit from an angel of oblivion seems like a perfect alternative to the alarming reality all around us. In Austria, the recent election of the Green Party candidate as their president over a far right candidate, is one thing to be grateful for. And Austria provides us with another reason to be joyful – the English translation of Maja Haderlap’s 2011 novel Angel Of Oblivion. Her first novel has already garnered an impressive collection of prizes – the Ingeborg Bachman Prize, the Bruno Kreisky Prize, the Ravensberger Verlag Foundation Prize and the French First Novel Prize. The sparkling and hugely sympathetic English translation by Tess Lewis has just been long listed for the 2017 Pen Translation Prize.

Loosely based on Haderlap’s own family, the novel is about memory and relationships. Things said and things not said. A father and daughter. A grandmother and granddaughter. A mother and daughter. Their relationships with the land and with history. It starts with the grandmother and a childish recollection of being cherished but against a heavy background of unresolved and unexplained pain. At first I am reminded of my own relationship with my grandmother: instead of faraway Carinthia take rural Shropshire – damson jam, snowy white linen warmed by coals from the fire, wintery walks on The Wrekin and getting ready for church on Sunday. My grandparents also had their tales of the war. Memories of the Home Guard practising for a German invasion on the front lawn, coupons, rationing and children being sent away to school. Once my brother and I found a rifle in their attic which we took out into the garden to play with. It was the only time my grandfather ever lost his temper with us. A time of deprivation and hardship but not of betrayal, racism and violence.

In 1941 Himmler ordered the relocation of 37,000 Slovenian-speaking Carinthians and that their property should be given to the nearby German- speaking population. Within less than six months, and thanks to the enthusiasm of the local police, over a quarter of a million Carinthians were sent to Ravensbruck and Mauthausen. The partisans took to the forest and fought for their land and freedom from the Reich. It is a chapter of the war that has been largely overlooked. ‘Angel Of Oblivion’ is about how you continue to live and function after such history.

For Haderlap both the Carinthian landscape and people are scarred and even the woods are full of wounds. The people still have their scars, whether as concentration camp tattoos like the heroine’s grandmother, or as physical wounds like her great aunt Leni – “On certain days she can feel the scars on her neck, back and bottom left from the Gestapo interrogation. It’s the past knocking on my door, Leni says, it calls out to me and starts tormenting me.”

You can see the bullet-holes on the chin and hand of the next-door neighbour who survived the massacre of her family. Another friend still has the scars on his ribs from the beating he received from the local police. But much worse that the physical scars are the mental ones. Both the grandmother and father have interior scars that will never heal.

The heroine inherits her grandmother’s journal and discovers that the main event of her life – eighteen months in Ravensbruck – are relegated to three small pages. After the war the grandmother changes from being an elegant rich farmer’s daughter to a woman with thin hair and a kerchief around her head. She made it back to her farm but had to wait a few years for the State to reassign it to her. She stores the chocolates that friends give her in her cellar and they become inedible. Sometimes she sleeps in the same room as her granddaughter and it’s then that the habits she learnt at Ravensbruck come flooding back. She feels no shame in being naked in front of the child and tells her not to put dirty newspaper into her vagina when she is menstruating – a tip she learnt in the camps. The grandmother sleeps with her arms tightly around her, as though she were still in the cold prison huts, yet in the morning it is as though the physical intimacy between grandmother and granddaughter never happened. Rather than the facts, it is learning to live with the facts that dominates Haderlap’s astonishing novel.

Even more “expelled from life” than his mother is the heroine’s father who cannot ever find a sense of peace or calm. As a ten-year old boy he was captured by the police and tortured for information as to the whereabouts of his mother. Three times the police staged a mock hanging of the boy. On their final attempt his mother ran out of house and was arrested. The grown-up boy wanders around the farm restlessly with a noose threatening to kill himself. When challenged by his daughter he claims that he will never do it but that holding the noose calms him down. The father is the most unsettling presence in a book full of people who cannot come to terms with what they have lived through. Once his mother dies he directs his rage towards his family as well as the outside world. He is drunk and aggressive, cruel to his wife and at times vicious with his children.

The father has learnt “the ABC of forgetting” but can never understand those fellow countrymen who denounced him and his family. On the 50th anniversary of the Anschluss he receives 5000 schillings from the State as a victim of Nazi oppression. He decides to spend it all on himself because he was the one who suffered. He is a lost soul and there is something hopelessly vulnerable about him. He exudes an air of danger and resentment. He is the ‘moral inheritor’ of the war.

Angel of Oblivion ends with the Bosnian war and Slovene independence. The heroine cannot quite feel a part of that independence because she is neither Slovene not Austrian but both. The older generation cannot believe that all the atrocities they lived through in the 1940s are happening again only fifty years later. Nothing has been learnt. Haderlap graduated in theatre studies because even if the most dreadful things happen on stage, once the curtain is down it is over and forgotten – unlike for the damaged people she grew up with for whom the war was never over. She is a dramaturge and a poet and her prose is full of rich poetic images and constructions. It is a profoundly beautiful and deeply upsetting novel worthy of all the prizes. Thank you once more Austria.

Translated from the German by Tess Lewis