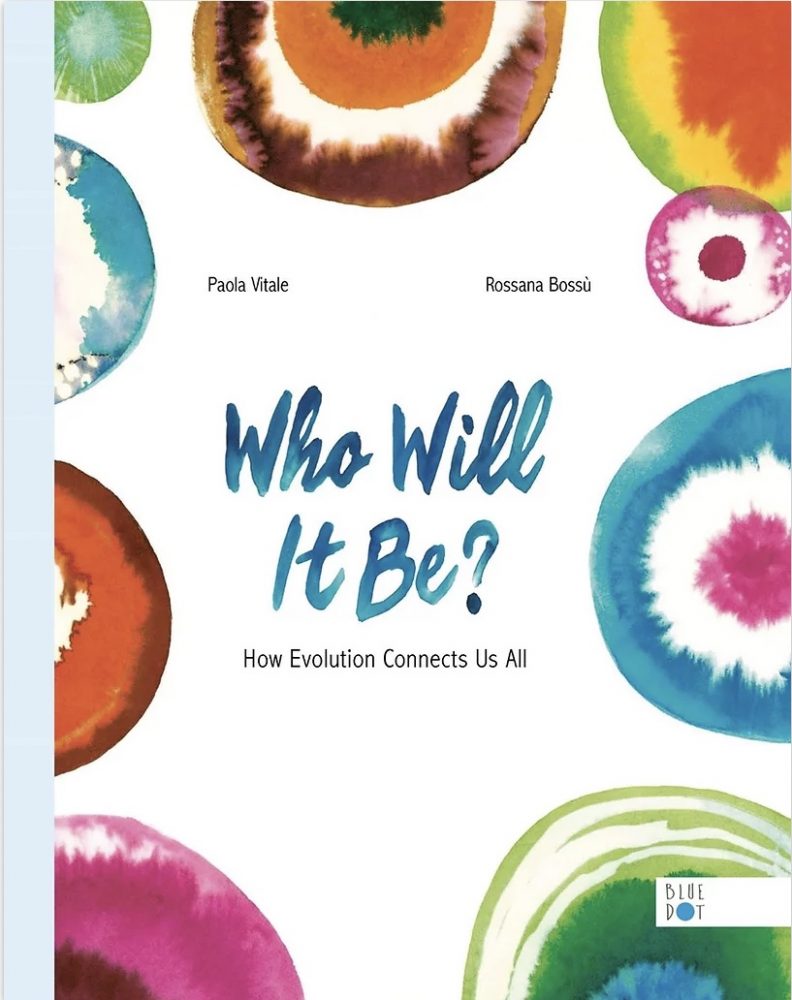 #RivetingReviews: Claire Storey reviews WHO WILL IT BE? HOW EVOLUTION CONNECTS US ALL by Paola Vitale, illustrated by Rossana Bossù

The first thing that strikes me about this new non-fiction picture book from Blue Dot Kids Press is the colours. The cover displays bright circles that remind me of carrying out science experiments with ink and blotting paper, watching the colour creeping up the paper and mingling with other colours. These vibrant watercolour images continue into the book; I really enjoyed staring at some of the pages, almost hypnotised, and getting lost in the depth of the colours.

The book presents the topic of evolution to children aged five to eight. The first section presents simple, double-spread pages asking the reader to guess what the various elements depicted will develop into. We’re given clues: ‘It has gills’, ‘It loves water but has lungs’. These pages are great to use in discussions with children about different types of creatures – what is an amphibian? What is a mammal? – which also supports Key Stage 1 learning in the UK school system. We’re led through various options before arriving at humans, where we are told that human beings are mammals, but also ‘part fish, amphibian, reptile, bird’. At first, I did wonder whether this might not be a little confusing; however, the second section of the book really helps to explain what is meant by this.

The second section is much more factual, the font shrinks, and the images become more scientific, yet retain a beautiful watercolour quality. This section opens with an explanation of Charles Darwin’s theories and how everything on earth has evolved from single cells, so ultimately, we all come from a common ancestor. I found this part fascinating, and Darwin’s theories are presented in ways that are easily understood. I particularly liked the image of the hourglass showing the way embryos develop in different ways.

I also appreciated the way the book doesn’t shy away from using scientific language: it isn’t dumbed down for a younger audience, but rather has an expectation that children can learn and use such language from an early age. The book could benefit from a glossary at the back – as much for the parents as the children! I have to admit that my eight-year-old’s question – ‘What’s DNA?’ – left me scrabbling to explain it in a way that made sense.

The book ends with confirmation of Darwin’s idea, that we all share the DNA of the first vertebrates on Earth, a fact that even now, I still find mind-blowing!

WHO WILL IT BE? HOW EVOLUTION CONNECTS US ALL

Claire Storey is a literary translator from German and Spanish. With Ruth Ahmedzai Kemp, she is coeditor of World Kid Lit, a website dedicated to translated books for children and young adults. Claire also speaks in schools about languages and translation, and was named Outreach Champion 2021 by the Institute of Translation and Interpreting.