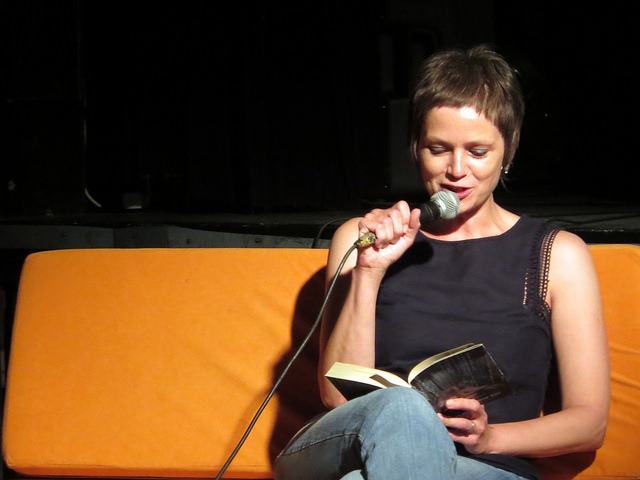 LitLink: From HACKED KITI by Andrea Pisac, translated by the author

During my one week rest, I visited the British Library. The reading rooms there seemed conducive to serious intellectual work, but in reality, they oozed with an attractive vibration that did everything to kill my concentration. When I first entered this large space with countless desks and sturdy chairs, I was immediately transported to the ethereal world of theta waves. My mental sharpness was lost to the hypnotizing whiffs of old paper that filled the room. As soon as I sat down and propped my head against my hands, I could feel myself giving in to the pleasing hum that bubbled between my ears. Just like when bath foam fizzes and then slowly disappears from the skin. Tranced out like this, I only pretended to be reading. No, it wasn’t a waste of time – I needed this kind of decompression to enter a different reality. Once I snapped out of it, I noticed a crowd of readers around me. If that many people had besieged me on a tube, the feeling would have been unnerving. But here, in the British Library, I felt happily dazed as I spied on the throng of readers rustling with their books. First I focused on a close up of their hands: how they’d lick their index finger and catch a chipped corner of a page to leaf through, how they’d press the middle of a book with a palm of their hand while leaning their head against the other hand, and finally how they’d reach for a pencil, place it in their mouth and wait until something worth underlying cropped up. Whichever direction I looked, leafing through books fell into a synchronized rhythm. Readers transformed into a choreographed dance ensemble. I could feel a new wave of drowsiness weighing down on me, pushing me into a micro sleep. Rustling of books, chewing of pencils, tiny exhales with each new book chapter, all those sounds making my mind fizz and disappear just like bath foam.

The book I carried to the British Library was not for reading – it was a camouflage. I could have chosen any title as long as it was aligned with the content of a particular reading room. The only thing I remember from my undercover book is that I never started or finished it. Once my initial daze crackled away like foam, I floated into the next stage. My eyes lost the glazed look and turned sparkly, a sense of airiness filled both my brain and lungs bringing along a scent of sweet citrus fruit. I switched focus like a movie camera: from a close up on readers to a panorama of the whole reading room. As I squinted to zoom in the details of the ceiling, I could see dust particles dancing inside the rays of sunlight. A thought stopped me in my tracks: how wrong we are thinking that air is a transparent, neutral matter. It was a misconception we couldn’t help. Because as we narrowed our focus into the fractal nature of the world, it was impossible to also keep an eye on all those sturdy chairs, rustling books and chewed up pencils around us. Then a text message would vibrate on my phone and stop my reverie. I was back feeling my feet on the ground and my behind on the hard surface of a chair. It was time to meet Serge for coffee.

Serge revealed to me

that all those academics who spent time in the British Library would have loved if the sweat of their brow moved down to their loins. That didn’t come as a surprise to me. Even scientists are only human: or more correctly, jaded humans with a poor sex life. I always suspected that desire, erotic or any other kind, was ignited and kept aflame by outside stimuli. It was anthropologists who proved that craving rarely came from inside us, but was rather a product of various marketing strategies, both public and private. Now I know that two things are needed to fuel a yearning: associative thinking and the repetition of stimuli. People learn through multi-dimensional tagging, a non-linear formula where one plus one never equals two. Repeated enough times, these connections fire up new neural signals, which in turn carve up new neural pathways, which finally send us off to burn with desire of one kind or another.

Let’s take a real life example and examine a sensually stunted egghead who regularly visits the British Library. Once upon a time, this esteemed academic yearned for amorous exchange just like anyone else, but without frequent exposure to the erotic stimuli, his neural pathways became clogged up. In other words, our revered scientist turned into a wet lettuce. However, one day as Mr. Wet sweated his brow and chewed on his pencil, he caught the attention of a perky woman anthropologist. Just to make things clear: of all scientists out there, anthropologists hold on to their erotic selves the longest because they never stop hanging out with the common folk. Our academic discipline actually allows us to carry on being sensual. Which is both good and bad news. Good because, within the ivory tower, we stand the biggest chance at achieving wholeness. Bad because if we are to become purebred rigorous scientists, we must purposefully give up on being whole. And losing what you once had is far worse than never having it at all, which is the case with all other eggheads in the academia. The only way not to despair over this lost chance is to fake being wet. There is actually a secret society of anthropologists whose mission is to feign rigidity and at the same time practice wholeness. Simply put, these anthropologists have found a way to shag around as much as they like without compromising their academic credibility. Our perky anthropologist is one such newly initiated member. The day when she zoomed in on Mr. Wet in the British Library, she immediately initiated the exchange of information. Serge, who is the author of this story and a senior member of the secret society, confessed that these untamed anthropologists have devised a peculiar communication strategy. On the surface, they appear just as wet and sterile, but between the lines, there is serious dirty talk going on. For example, our anthropologist wrote on a piece of paper that she would much appreciate to pick Mr. Wet’s brain in the British Library café. She folded the note and threw it on the book Mr. Wet was hunching over. You should know that purebred scholars are not complete emotional half pints. One feeling in which they excel is vanity, and this was something that secret society members knew well. As expected, when Mr. Wet read the note, his face lit up at the thought that someone wanted to relate with him. Without a second thought, he closed his book and followed the anthropologist’s entrancing saunter.

The point of this story was not only to make me laugh, Serge reminded me, but to open my eyes to what was actually going on around me. And the British Library was a good case in point. Ever since the first exchange of information there began with a note on a book and ended with trousers down, the entire space got imbued with this particular energy. Anthropologists proved a long time ago that humans are social creatures who’d do anything to feel accepted. This is why one small note can snowball into several note-prompted fornications, which can in turn rekindle erotic desire in all readers, transforming the entire British Library into one big scholarly brothel. Serge does the same thing with me. Whenever we agree to meet, he finds me in a reading room and tosses a crumpled note on my undercover book. In our case, it’s just a joke. We don’t sleep together. We only exchange unusual stories about the secret society and our own wholeness.

Andrea Pisac is an award-winning fiction writer and blogger. She has a PhD degree in anthropology from Goldsmiths College in London. Her last novel Hakirana Kiti (“Hacked Kiti”) was short-listed for Croatia’s best novel in 2014 (t-portal literary award). After spending 12 years in the UK, she returned to Croatia and launched Zagreb Honestly blog where she writes about everyday ordinary things from an extraordinary perspective, combining fiction, ethnography and images.