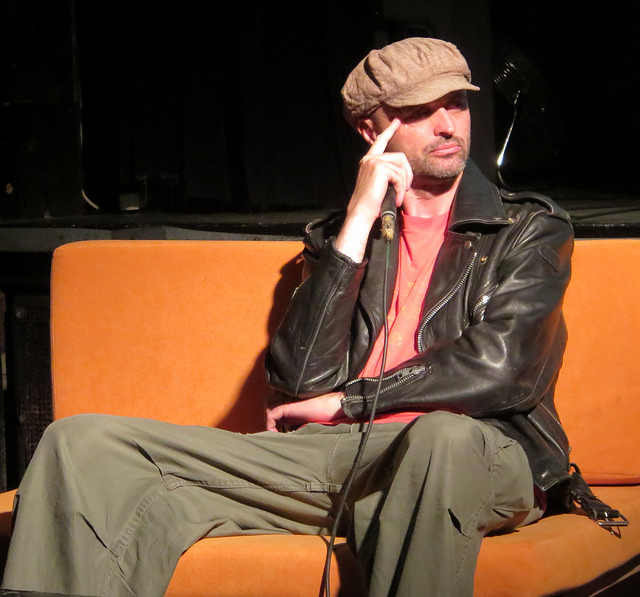 Nana watches as Father lays new tiles in the toilet: brown tiles on the floor, white tiles on the walls. Father says, “Why don’t you go away, you’re blocking my light.” Nana leaves, and Father lays a new brown tile and says, “Go get me a glass of brandy.” I walk down the corridor to the kitchen, get the bottle and the thick glass and run back as quickly as I can; with one eye closed, he measures the tiles. In the morning he takes out his only suit, coffee colored, his only tie, blue, puts them on, and all dressed up takes the oxen and the cart to the town; around noon he comes back with the water tank, spigots and the squat toilet. I carefully help him unload the tin squat toilet. Mother helps us too, she tells me, “Let me.” I tell her, “No, let me.” Father affectionately pats the toilet with his hand and says, “Let them see who is the first in our village!” In a couple of days, he gets up early again and yokes the oxen, this time he wears his everyday clothes; he walks in front of the oxen and whistles: it’s been a while since I’ve heard him this happy. I peek through the window and think, today he is surely going to get a TV, the first TV in our village, I’ve been hoping for it for years. And he’s been bringing it up a lot too. Later on I get dressed, leave for school. Half way there I sit under a hazel bush: Pejo comes along and I tell him in confidence, “Tell the teacher I’m running a fever, and tell to my folks we only had two classes.” I go back and immediately climb the hill above the house: I stand and wait. I keep my eyes peeled at the point where any moment my father should appear: shadows of the trees have extended their necks, and it seems that everything around me keeps peering at that one spot. Father is not yet here: then I see him. When he finally arrives, he stops the oxen and the cart in the middle of the yard; at first sight that iron barrel tilted in the hay looks like an atomic bomb. I touch it with my hand, knock on it with my finger, knock-knock. Father says to Mother, “There, that’s water pump, now we’re going to be the only ones in village with running water.” Nana asks, “Does it take a lot of power?” He says, “It takes how much it takes.” Soon an electrician in blue overalls comes from the town in his Zastava van; he and Father take the water pump into the basement. Father turns on the light with his elbow as they pass; they set the pump in the corner. They spend hours messing about with it. They attach wires, run black, rubber tubes: wave their hands about as if trying to create magic. The electrician goes to the kitchen and sets up the spigot with his pliers. He opens it, waits. Something rumbles, then bangs irregularly: yellow, murky water unwillingly starts flowing out of the spigot. The electrician glances at my father, pats his shoulder and says: “It’s good!” He then takes the water tank, goes to the toilet, asks for a chair; Father brings him the chair, the electrician climbs on it and sets the water tank. A smile on his face, he lets me flush the toilet, Father is confused, then he shouts, “Come on already, what are you waiting for!” Then, all together we watch ceremoniously as the foaming water runs from the tank and crashes into the squat toilet’s dark hole. After that the electrician takes a shot, bright yellow screwdriver out of his bag and installs two dark red light switches next to the toilet door. He explains to my father, and now as he speaks there’s a loud sound in his chest, the first switch is for the heater, but since there’s no heater, he says, it won’t work. “The second one,” he adds, “is for warm water.” The electrician walks to his van and together with my father brings something grey, metallic, cylindrical, something that again looks like a bomb. “The boiler,” says the electrician to Nana who has just come from the field, she just shakes her head in desperation. “Go do something,” Father tells her. They use long screws to put it on the toilet wall, again it takes them a long time to attach the wires. A little later, the electrician presses that other switch and it turns bright red. He turns it off, nods happily, and says, “Well, that’s that.” In the afternoon, Father, his stride long as if measuring something all the time, goes to town and comes back with a shower on his shoulder; first he sets up the pole, then the head that looks like a telephone. Happily he calls Mother to come over. When she comes, and straightens her sleeve with the hand, he presses that other switch next to the toilet door and tells her, “You turn this on an hour before you want to have hot water, don’t forget to switch it off after that.” Then the walk in the toilet together, I follow them at a safe distance: ready to take to my heels in case something happens. Fully dressed Father steps on the ribbed surface of the squat toilet; he then sets up the showerhead a couple of inches above his head. He turns on the spigot and the water disperses in a hundred little arrows. Father bursts into laughter, his hair wet, he jumps to my mother and peers at the water as it slams from the shower and into the squat toilet’s hole; laughter sets free from his mouth again. “This will save our lives when we come back from the field and take a shower,” he says gleefully.

That same night I dream that he and the electrician have brought me a present; inside is an iron heart. Father calls my name and announces ceremoniously, “Only two people in the world have a heart like this, the American president and you.” I stand next to the box, peek inside, ask the electrician, will they accept you into the army with a heart like that? He pats my shoulder, points at the box and says, “There’s no bullet in this world that can pierce this iron heart.” I salute and, happy, as if I’m already in the army, run into the field. I lie down in the grass, watch clouds in the sky; they remind me of pillows filled with feathers, then I fall asleep again. In the morning the water pump wakes me up, it bellows like a captured animal; the light bulbs flicker in the evening, they sometimes even burn out, as if the water pump takes revenge on us for some reason. And as time passes, most people from the village complain about the water pump: they say it ruins their light bulbs. Father replies calmly, shrugging his wide shoulders, which he inherited from Grandpa: “Dear people, it’s not my fault that we have such weak power in the village.” At home, he tells Mother, “Fuck them, fucking rednecks.” When in the evening I go over to some of our neighbors, almost always the light bulb starts flickering in the ceiling; then everyone in the room keep their eyes peeled on that light bulb, then start cursing my father, his mother and the water pump. At first they curse silently, then more loudly and angrily, until they remember I’m there, then they calm down a bit. But, I’m glad when they curse us; they are on one side, I and Father on the other: that’s when I feel the closest to my father.

Damir Karakaš was born in 1967 in the village of Plašćica in Lika. He is the author of nine books, among which three short story collections and five novels. His books were translated to German, Czech, Macedonian, Slovenian, Arabic… In 2008 Dalibor Matanić directed a movie based on his short stories collection Kino Lika which won numerous awards in Croatia and abroad. The recent novel Remembering forest is a book about an unusual childhood in a remote village, which got a critical acclaim in Croatia and Serbia. The novel has recently been shortlisted for this year’s edition of most popular domestic literary t-portal award.