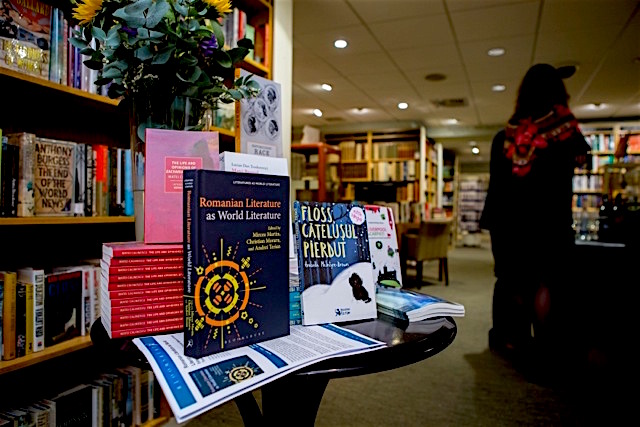 On the 10th of April, The Romanian Cultural Institute held a collective book launch as part of its series of events for the 2018 London Book Fair, at Gower Street Waterstones in the heart of London’s university quarter.

The event was largely centered on Romanian Literature as World Literature, an intriguing and long-overdue addition to the Comparative Literature corpus. Published by Bloomsbury Academic and edited by Mircea Martin, Christian Moraru and Andrei Terian, the volume considers past and present Romanian literature through the lens of the dominant comparative current of the last two decades. Moraru introduced us to this wider context, declaring ‘criticism an art of 21st century representation’ in considering ‘marginal cultures of “post-exotic” interest’. World literature is the latest metamorphosis of Comparative Literature, he told us, and with a growing comparative scope that characterizes contemporary criticism, national literatures must continue to be re-examined in the future.

The book was thus soundly situated in a wider context, but its contents, very new, remain enigmatic. According to Professor Terian, the sixteen authors that contributed to the assortment agreed on a collective manifesto that he described as a ‘change in perspective’, which sounds intriguing enough in itself as an independent document. Professor Terian also shared a beguiling spoiler by mentioning Romania’s national poet, Mihai Eminescu’s , interest in Orientalism. Though the poet has become a cult-figure even beyond Romania in niche circles, such revelations will surely contribute to contemporary dialogue.

Literary critic Ion Bogdan Lefter encouraged us to consider the peculiarity that might make this book significant in the study of Comparative Literature: in examining the literature produced in the (very harsh) last decades of communism, there is also a debate at play, on what Postmodernism means in this premise, amplified by the mentality-altering shift from Francophone to Anglophone culture in Romania.

Magda Cârneci, a renowned poet from the Postmodern 80’s generation to this day, presented the English-language translation of a volume characteristic of those last communist days, entitled A Deafening Silence (Shearsman Books, 2017). She enriched the evening with an intense, charged reading of a poem, something she has done in similar London events in the past.

Arabella McIntyre Brown lives in a village in the Carpathian Mountains and writes children’s books in Romanian – children, according to her, are the best critics, both honest and generous. Very popular, her two books now available in English are Floss, the Lost Puppy and Dragons over London (Booklet Fiction, 2017). The diversity of projects goes hand in hand with Brown’s push for bilingualism, and her desire to teach children to love reading and eventually writing.

Marius Turda, on a different note, presented Historicizing Race, in which a modern holistic study of eugenics is considered, where politics, science, medicine, and ideology intersect. Colonialism, he argues, can be understood by Eastern Europeans who, living in communism, were victims of a language of subjugation and oppression. The book is not necessarily for specialists, but one that aims to equip the general public with the knowledge necessary to come to terms with subjects that have become uncomfortable. Turda concluded with a point that seemed in alliance with the event as a whole: the goal, in 2018, is to redefine cohesion and solidarity.

Other publications presented on this occasion, by Professor Lefter, were Matei Călinescu’s The Life and Opinions of Zacharias Lichter (New York Review Books, 2018), a singular novel whose protagonist seems to lie somewhere between the Underground Man and Puck, the widely acclaimed Ana Blandiana’s The Sun of Hereafter. Ebb of the Senses (Bloodaxe, 2017), a sensitive collection of poems that, rife with sea symbols, address the personal and the national, and Lucian Dan Teodorovici’s Matei Brunul (Dalkey Archive Press, 2018), a subtle psychological sketch of the relationship between a puppeteer and a policeman in the darkest period of communist surveillance.

When one considers the conception and methods of Comparative Literature as a study (typically referring to critical figures like Goethe with his Weltliteratur, Auerbach with his Mimesis, Wallerstein and Moretti and Damrosch), one can conclude with satisfaction that it is only natural for that ethos and those tenets to be addressed in the study of Romania: an under-represented but worthy producer of valuable, unique literature. Marius Turda noted that postcolonial topics are graspable for Romanians, with the older generation having experienced a language of oppression for nearly half a century. The same judgment might be extended to many other countries, and perhaps provide a certain nuanced understanding of European literature in general.

Most intriguing of all is this Romanian Literature as World Literature, which considers Romanian literature in an unprecedented way: rather than considering it ‘niche’ literature, perhaps we might see any literature that is worthwhile as being dictated by themes rather than geography. I dare suggest that these considerations apply not only to this promising book, but to all of the books presented as a collection with a vision in mind, and to the spirit of cosmopolitanism that infused the 2018 London Book Fair. Such events make for a pleasant and encouraging surprise, leading us to think that an increase in translated literature published in the U.K. might be the next step forward.

Photo from the event by Alex Coman