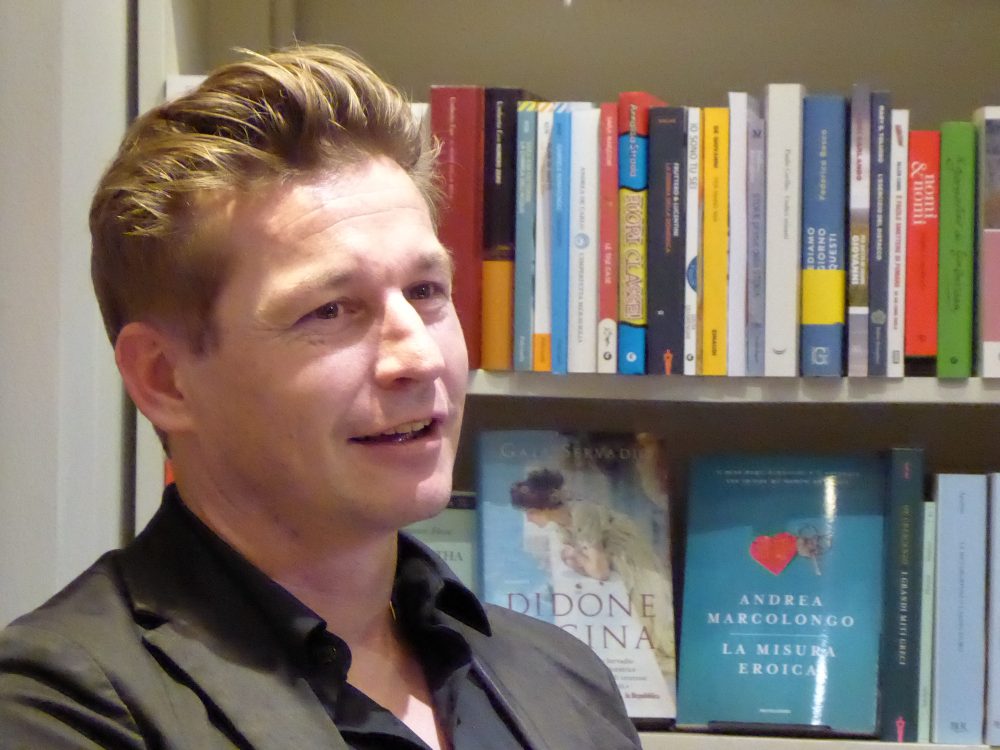 Literally Swiss: Camenisch in the UK by West Camel

When Arno Camenisch was young he had a globe, a treasured possession that would lead him to spend much of his early twenties travelling. It also led him to the realisation that the vast Swiss valley that is his birthplace would only just accommodate London’s great expanse. How could that possibly be? He thought he was mistaken.

But now he is here, in London, and reading from – or rather performing – his Romansh and German novels to a UK audience for the first time. And he finds he was right after all: London is that big. His home village was that small.

This dynamic – the relationship between things small and large; how they differ and what they share – permeates the whole evening. It’s a small literary soirée at the European Bookshop in Kensington, hosted by the European Literature Network’s Rosie Goldsmith, but it has big ambition: to introduce Camenisch – a major star in Switzerland – to the UK literary scene. 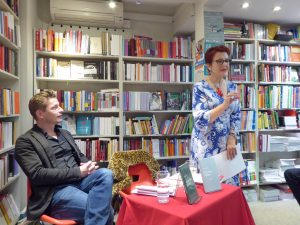 Camenisch writes in two languages: a small one – the Sursilvan dialect (spoken by some 17,000 people) of Rhaeto-Romansh (spoken by perhaps 50,000 people); and a large one – German (spoken by upwards of 200 million). He speaks Romansh at home – ‘it’s like touching the earth’ he says – and he speaks it in the village he comes from too. But German is de rigeur elsewhere.

And when he writes? He describes this as being like playing a church organ: his two principal languages are two different registers – they conjure up different worlds. But as a rule, these days, he writes in German. Unless the weather is particularly good, he says, when Romansh flows from his pen.

The Alp (Dalkey Archive, 2014), the first novel in Camenisch’s Alpine Trilogy, is written in both languages. The trilogy – which includes Behind the Station (Dalkey Archive, 2015) and The Last Snow – recounts life in a rural Swiss village, sketching the characters everyone knows and accommodates, and the sights and sounds of a tight-knit, comparatively tiny world. And all this is told in spare, minimal prose – simple-seeming, but in no way simplistic. ‘My books are like whisky, not beer’, says Camenisch. ‘The art is to reduce to an essence … to just what you need’.

And what we need, it seems from the evening’s discussion, is each other. ‘We find each other in the books,’ Camenisch tells us. ‘It’s never about the author, it’s about people.’ He likens all our lives, all our realities, to villages; his tales of small events in small places are universal. Once again he’s looking at his globe and realising that a city of millions could fit into his valley.

It’s a positive message. And in person Camenisch cuts a positive figure – one that explains why his live performances are so hugely popular across Switzerland. But there’s some sadness too.

The Last Snow, while continuing the wry observational comedy of the first two books, is cut through with tragedy. It is Camenisch’s response to climate change – to the transformation he’s seeing on the mountains of his youth. The snow and the glaciers are disappearing; what world will his daughter grow up to live in? he asks. So the book is about endings and vanishings. And this entropy is reflected in the language too, for The Last Snow is written almost entirely in German. Throughout the trilogy Romansh gradually disappears – just as it is in real life.

There is, however, another reason why Camenisch is now writing in a bigger language. He says it gives him a certain distance from his work – an objectivity that for me chimes with the theme of the evening: he can get a bigger picture with a language that is less intimate for him.

But there is yet another reason why he now writes more in German. Perhaps Camenisch’s talent has outgrown his village, his canton, his country. Perhaps he himself is on a trajectory from the small to the large. 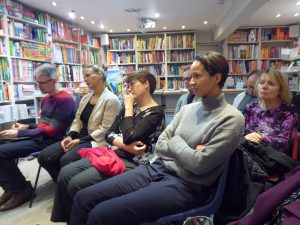 Based on this first small event, there’s plenty to suggest that Camenisch’s sights should be set high – plenty to suggest he has the potential to become the same kind of star in the English-speaking world he is in his native country. There are the books, of course, but it’s the performance that is so engaging – the feeling that something huge and important is being told you, but in the intimate way that a friend might tell you a story in a pub.

Camenisch recounts his experience of a reading tour of Switzerland alongside a band. The accordionist, he says, didn’t really play, rather his instrument acted as an amplifier for the music the musician had inside himself.

When he gets to his feet and performs – in German, in Romansh, and even in English (as he did for the first time on this very evening, in a translation by Annie Rutherford) – Camenisch has the same quality: Everything is inside; and he acts as his own amplifier.

And you need to hear him.

Our photos from the event on 4 October 2018 at the European Bookshop can be found here.