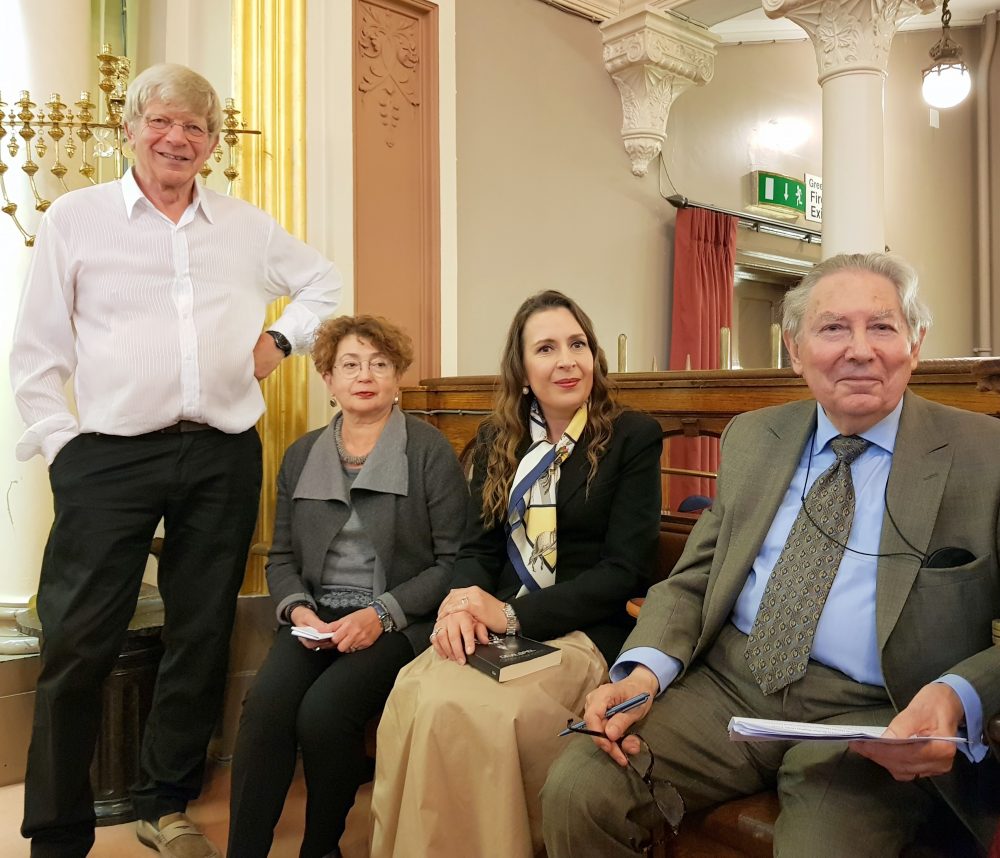 Grigory Kanovich at 90: A Celebration by Max Easterman

On Wednesday, June 12th, it was my pleasure to host a celebration of the life and work of the Lithuanian-Jewish writer Grigory Kanovich, at the New London Synagogue. It was a celebration both for his 90th birthday and for the publication of the second of his books translated into English, DEVILSPEL (reviewed by ELNet here) . Thanks for organising the evening go to the publisher NOIR PRESS and the educational charity THE SPIRO ARK, which was also supported by the Lithuanian Jewish Council and Grigory’s son, Sergey. The audience included the Lithuanian Ambassador, Renatas Norkus, his wife and several of their embassy colleagues.

Grigory Kanovich was born on June 18th 1929 into a Jewish family in Jonava, Lithuania. His childhood, which he describes in SHTETL LOVE SONG (his first work translated into English, reviewed here), was traditional Jewish and largely happy. This changed violently in 1941, when the Nazis invaded Lithuania; and that event is the basis of DEVILSPEL. He and his family fled Lithuania through Latvia to the Soviet Union and spent the war as refugees – in Kazakhstan.

Kanovich returned to Lithuania and its capital, Vilnius, in 1945, where he published his first book of poetry – at the age of 19 – and then went to university and graduated in Slavic Studies.

He has subsequently devoted much of his life to documenting, in a series of novels and stage plays, the instabilities and insecurities of life in Jewish communities in Eastern Europe over the past two centuries. He has also written nearly twenty stage plays and a number of screenplays. But it is the novels which have attracted most critical praise outside his own country. Two of them – Smile Upon Us, Lord and A Kid For Two Pennies – were turned in to an award-winning stage play, presented in the UK, the USA and Canada.

Grigory Kanovich has won many awards, among them the Order of the Lithuanian Grand Duke Gediminas, and the Grand Cross of the Order for Merits to Lithuania. He was chairman of the Jewish Community of Lithuania, from 1989 to 1993, and was a deputy in the last Supreme Soviet of the Soviet Union, from where he warned warn Mikhail Gorbachev of the growing anti-Semitism in Russia. He emigrated to Israel in 1993. Kanovich is still regarded as the foremost living writer on Jewish themes.

I have a particular personal reason to have been delighted to host the evening. My father was the son of Litvaks – Lithuanian Jews – but the details of how his parents – my grandparents – came to Scotland and why, were never discussed … there was some kind of taboo. Indeed, I couldn’t even find out the name of their shtetl. But reading Shtetl Love Song and Devilspel and listening to the tributes to Grigory Kanovich that evening, I have been able to understand so much more about how my family had lived and what they had lived for. They’re all dead now, have been for years. So that understanding has been a long time coming.

I was joined for the event by Faina Kukliansky, Chairman of Jewish Community of Lithuania and a former chairman of the Jewish community of Vilnius. Her parents were, like Grigory Kanovich, some of the very few survivors of the Lithuanian Holocaust. She spoke movingly about Kanovich’s influence in restoring the Jewish community in Lithuania … a community that was almost totally destroyed by the Nazis and their Lithuanian collaborators: only around 2000 survived out of a pre-war population of over 200 thousand.

Antony Polonsky, Professor Emeritus of Holocaust Studies at Brandeis University in Massachusetts, and Dr Kristina Sabaliauskaitè, who is one of  Lithuania’s foremost novelists and historians, then discussed Kanovich’s literary career, his relationship to Soviet power and censorship, the life the Jews led in pre-war Lithuania, as well as the problems Lithuania has faced in recent years coming to terms with its role in the Holocaust. We heard several readings from his books and then discussed his literary style, his status in contemporary Lithuanian culture – sometimes controversial because he writes in Russian and not Lithuanian – and his impact on other writers.

The climax of the evening was a concert of rare Yiddish and Hebrew songs – A LETTER FROM THE PAST – sung by Rafailas Karpis, accompanied at the piano by Darius Mažintas, followed by an impassioned tribute to Grigory Kanovich by his son, Sergey. It was also announced that a third novel, Tears and Prayers of Fools, is soon to be available in English. Although he chose not to address the audience and speakers, the near-90 year old Grigory Kanovich  was present on Skype throughout the evening from his home in Israel. We hope he enjoyed the celebration of his life and work as much as we did. See some photos of the evening here.