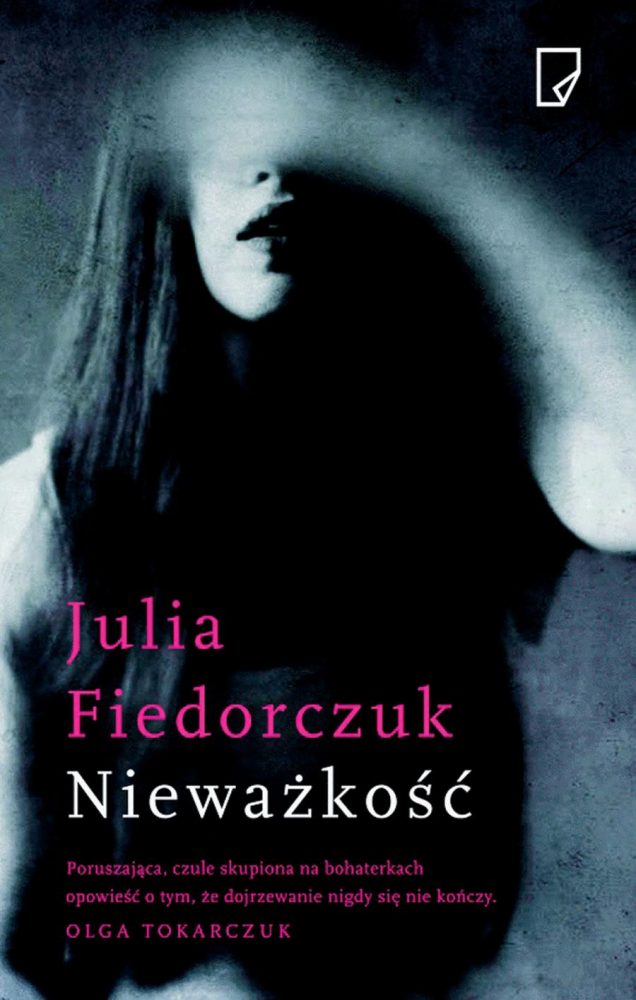 From WEIGHTLESS by Julia Fiedorczuk translated by Anna Zaranko

It was dark already and the three of them were lying in bed when there was a sound of knocking at the door. Little Paul had only just dropped off, assuming that innocent-angel look characteristic of sleeping infants.

‘Go see what’s going on,’ said Helena to her husband, annoyed that the child might wake up at any second.

A moment later, she heard the voice of her mother. Paulie turned over, from one side to the other, gave a little grunt, but went on sleeping. She scrambled out of bed and went after her husband in bare feet.

‘It’s your father,’ explained her mother. ‘He started about an hour ago and hasn’t stopped since.’

‘Come inside,’ she urged. ‘Don’t stand here in the doorway.’

‘But I have to get back to him. I came over because I thought you might have some ideas.’

Helena thought quickly. ‘I’ll go with you,’ she said. ‘I’ll be right back,’ she told her husband. ‘If the little one wakes up, heat up that milk in the fridge.’

She dressed quickly and they left.

‘So, he just started singing?’ she asked on the way.

‘I was in the kitchen,’ said her mother, ‘I was nearly done altering that coat for the Karolak woman. And suddenly, I could hear this quiet music. I didn’t know where it was coming from, but I didn’t really think about it. It was quite pleasant, actually, working along to it…’ she added, and paused. ‘But then,’ she went on, ‘the sounds got louder and finally I realised that it was coming from your, that is, your father’s room. I went to see him. And there he was, sitting on the bed, singing.’

‘What?’ asked Helena, her voice unsteady, ‘What was he singing?’

‘Sort of, you know, without words. As if, somehow, he wanted to sound like a bird.’

Helena slapped her hands to her temples.

‘I don’t think I get what you’re saying.’

‘I know,’ said her mother. ‘At first, I just stood stock-still, like a post,’ she went on. ‘And I just listened. You know, it was really quite nice. Then I started talking to him, “Wladziu, Wladziu,” because what was I supposed to do? You know he hasn’t heard what’s said to him for a long time, or hasn’t wanted to hear. But he just ignored me, went on doing his own thing; a bit like, you know, a nightingale. . .’

‘We have to call an ambulance,’ Helena announced.

‘And tell them what? He needs an injection to stop him singing?’

They could hear the singing from the garden already. Helena covered her face with her hands.

They went inside. He was sitting up, propped against large pillows, looking out of the window and singing.

‘Dad,’ said Helena. He seemed to glance at her, but furtively. The singing, on the other hand, became more intense. And even more beautiful. ‘Maybe he’ll fall asleep eventually,’ she turned to her mother. ‘Maybe it will all pass in the night.’

They went through to the kitchen and sat down at the table. It was impossible to do anything, all they could do was wait and listen to his warbling.

‘Did he ever use to sing?’ asked Helena. ‘I mean before, when you were young?’

Helena glanced at the clock. It was almost eleven.

‘Maybe he’ll fall asleep,’ she repeated. ‘Maybe it will all be over by the morning.’

‘If he’d only take some breaks,’ replied her mother. ‘Then it would be bearable.’

‘Mum!’ Helena could not believe her ears. ‘He’s sick.’

‘You know something,’ her mother replied calmly, lighting a cigarette, ‘lately I’ve been asking myself, more and more often, just who is sick around here.’

Helena looked at her questioningly.

‘Karolak,’ said her mother, ‘when they were closing down the co-op, still managed to steal whatever was left going.’

‘It’s true. He looted anything that was up for grabs. And now, he’s a big entrepreneur. He and Mrs K have built themselves a new house for their old age, two cars, even though she doesn’t drive and both their boys are in Warsaw. . .’

‘So what. They’re doing well. Good for them.’

‘I know,’ said her mother. ‘But when I go over to that palace of theirs – and I do go because she’s always wanting me to sew something for her – then I often wonder: why does the earth have to bear the weight of that concrete block? It’s not even attractive on the outside. Oh inside it’s all marble and wooden floors and stuff in the bathroom that you haven’t even dreamed of. All those perfumes, your Diors: I had a little spray once, then I got scared that Mrs K would catch me.’

‘What are you trying to say?’ asked Helena.

‘I don’t know,’ her mother admitted, finally. ‘It’s just hard to begrude someone a little singing.’

Helena didn’t finish. Her father’s warbles suddenly changed into a violent coughing. They both leapt up and rushed to his room.

She sat down next to him on the bed, helped him to raise himself from the pillows and patted him on the back. The coughing subsided and there was silence. But not for long. As soon as his breathing was regular, Helena’s father cleared his throat and intoned:

‘Madonna, Oh Black Madonna, how good it is, to be your child.’

Helena stood in the middle of the room like a pillar of stone.

‘Permit me, oh Black Madonna, in your arms, always to hide.’

An old image from church floated into Helena’s mind: a thin, brown-faced woman holding a child with a swollen belly.

‘Wladziu,’ her mother’s voice was beginning to break.

Her father sang even louder.

‘You were right,’ she turned to Helena. ‘It’s time to call the ambulance.’

Helena came to at last.

By the time the ambulance arrived, her father had managed to sing all the best-known hymns. He fell silent as soon as he saw the doctors. He showed no resistance on being led to the vehicle – he even wanted to walk himself, but they put him on a stretcher, though it wasn’t clear why since there was nothing at all wrong with his legs.

‘I’ll come and see you tomorrow,’ called Helena’s mother, when the ambulance doors were closing behind him.

They drove off with the siren on. It was just after midnight, the stars were shining brightly in the clear May sky.

This time, they walked in total silence, as though the father’s muteness had in some strange way embraced his wife and daughter as well.

Julia Fiedorczuk is a professor, poet, translator and lecturer at the English Institute of Warsaw University. She has published five poetry volumes, two short story collections and two novels, including NIKE-nominated Nieważkość (Weightless). She is one of the pioneers of ecocriticism and ecopoetics in Poland. Her awards include: Debut of the Year funded by Polskie Towarzystwo Wydawcow Ksiazek (Poznań 2003) and Hubert Burda Preis (Vienna 2005). She is a member of ASLE –  Association for the Study of Language and the Environment.

Anna Zaranko is a freelance editor and translator, primarily from Polish, and was the ALTA mentee for 2015/16, working with Bill Johnston. Aside from Weightless, she is also working on Julia Fiedorczuk’s short stories.

Julia Fiedorczuk will talk to Marta Dziurosz during our next *Euro Stars* event on 23 November at Waterstones Piccadilly. Other guests include Magdalena Tulli and Deborah Levy. Anna Zaranko will read excerpts from her translations of Fiedorczuk’s prose.