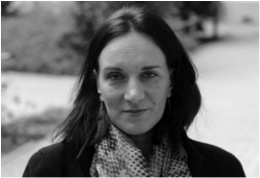 From ‘The Monster’ by Terézia Mora translated by Leonard Olschner

For the past 11 days Darius Kopp has been waiting in the sweltering heat of Budapest for the urn of his wife.

Like an amphibian under a stone. Except that he was almost never alone. Thousands of people around me, no matter where I go. But, and that was something new, or else he had not yet noticed: it was as though not a single one of them was able to see him. At first that was quite pleasant, a little, as in the flat – I see, but cannot myself be seen. During the eleventh day, however, and especially after it had become night again, Darius Kopp realised that the heat of the last few days had not only gradually and relentlessly run the entire gamut from sudorific to unbearable, but realised equally a feeling of loneliness. This night he spent sleeplessly on the banks of the Danube, at the periphery of a music festival whose name was Sziget, which means: ‚island’ – yet another thing I don’t know from you. Darius Kopp sat in the grass for a long time in the immediate vicinity of a kissing couple. The girl’s dress had slipped up, showing her striped bikini slip which didn’t even cover half of her round, tanned bottom. The beauty of fulsome women from more southern climes. They were so close that, if the girl had lain on her back, her shoulder would have touched Kopp’s shoulder; the boy, looking past the girl, could have seen him; after all I can see him as well, but the boy’s face was like the place where Darius Kopp was: nothing at all. They even began to make love; Darius Kopp could smell the scent, and that was something so painful that it practically rammed him into the ground: he couldn’t leave, but neither could he avert his eyes; his strength was just enough to keep him from crying audibly. They noticed nothing of this whatsoever. Another three days, Darius Kopp was thinking, as invisible tears welled. Just three days, just another three days. How am I supposed to endure this without losing my mind. Three more days.

Someone was being merciful to him, as it in fact wasn’t another three days after all. At 9 in the morning following this night the undertaker rang. A heat warning was issued for the day; in Pest the water hydrants were open so as to hinder the worst in the treeless lanes; but the elderly gentleman in Buda was of course wearing his suit, even now, such as befits an undertaker, and the hand which he offered Kopp was dry and rough like folded paper. I’m pleased to meet you. […]

Translated from the German by Leonard Olschner

Terézia Mora – Writer in Residence 2005 at the CAGCR. Terézia Mora was born in Sopron, Hungary, in 1971 and has lived in Berlin since 1990. There she studied Hungarian and drama at the Humboldt University and screenwriting at the Deutsche Film- und Fernsehakademie (dffb). Her literary career began when she won the Ingeborg Bachmann Prize in 1999. She is not only a famous novelist, but also works as a translator from Hungarian into German and as a scriptwriter, besides writing both stage and radio plays. In 2013, Mora won the prestigious German Book Prize for her novel Das Ungeheuer. In 2013/14 she gave the Frankfurter Poetikvorlesungen.

Terézia Mora was one of Six Trendsetting German Authors who took part in the ‘Waves of Difference’ German Literature Festival organised by Queen Mary, University of London and Goethe-Institut London.