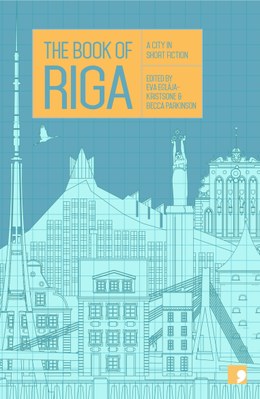 From THE BOOK OF RIGA: THE HARE’S DECLARATION by Juris Zvirgzdiņš introduced by West Camel and translated by Mārta Ziemelis

A man who has lost his job decides to end his life loudly. He wanders through Riga looking for a suitable place and decides to end it all at Riga’s tallest church tower, which offers a breath-taking view of the red roofs of the Old Town, the more modern part of the city, Riga Bay and the Daugava River. The tower bell plays the popular Latvian folksong ‘Rīga dimd’ (‘Riga Resounds’) five times a day.

In short, I lost my job and didn’t find a new one.

Wherever I tried to worm my way in:

The bank took away my house, my wife left me, my daughters, well … go reread King Lear, or our own Kārlis Skalbe’s The Cat’s Mill – that’s how they acted.

So then I decided to end it – loudly! I’d slam the door to the void with a bang! But before I left, I’d say everything that was on my mind, and directly – I didn’t need the media, a TV debate or an internet forum interfering. They won’t shut my mouth.

I wandered aimlessly through Riga, looking for a place. The right place. The Freedom Monument? One guy already shot himself there. Does anyone still remember his name? The Vanšu Bridge? No, perhaps not, they’d trick me into coming down – their budget has enough money for that, they’d send a smart-ass psychologist, firemen… But the tower of St Peter’s Church? The correct choice, sir, congratulations! That evening, with a backpack on my shoulders and my ticket in hand, I rode up to the tower’s viewing platform. I listened a moment while a guide explained something to Japanese tourists, then crept off behind their backs to climb one storey higher up the metal stairs. To be closer to the golden rooster weather vane and to God.

I spent the night in a sleeping bag. In the morning I stood at the edge of the platform and, to attract attention, started waving my arms. At first one passer-by raised their head, then others. Soon enough a fairly large crowd of people had gathered below. A police car drove up, then firemen and a crane. Striped tape was set up around the base of the tower.

I took the notepad with my prepared speech out of my backpack and raised my hand in greeting. I opened my mouth and – sssh! I could only whisper. My throat had closed up. I’d caught a cold, sleeping on the stone floor.

I tore the page out of my notepad, folded it into a paper aeroplane, and released it into the air. Circling, my declaration glided downward. A tall police officer jumped up and caught it. His commanding officer yanked the paper out of his hand, took a look at it and, folding it carefully, stuck it in the pocket of his uniform. He gave his subordinates an order. They formed a chain and shifted the crowd farther away from the church. Neither outrage nor desperately flashing press IDs were any good, the police let no one near. So I stood up there, waved my arms like a ghost, tore pages out of the notepad, scribbled this and that, folded paper aeroplanes and sent them down. A few ended up in the cops’ clutches, spectators collected others, and that was it. Nothing happened. No revolution began.

One after another, both officials and psychologists tried to talk me down. A unit of men in bullet-proof vests tried to storm the tower, but my poster near the platform – LANDMINES! – stopped them. And then they just got bored. Even a helicopter didn’t help – it got tangled in electrical wires and crashed next to the Laima Clock, flattening the Lamborghini parked there. There were no casualties, thank God; the car, unfortunately, was insured.

My humble food supply ran out in a few days. With a packet of Selga cookies and the remnants of my mineral water, I could last one more day – two, at best.

What next? Should I jump to the ground and shatter? Sneak down in the dark of night, let them take me to the nuthouse and feed me medicines? A splatter or a vegetable – not a lot of choices. What was holding me back? Arrogance? The desire not to disappoint my fans down there?

The crowd, always changing, grew. There were even bets being made – will he jump or not? Whole buses full of people came. I’d become a sensation, a tourist attraction and, to brag a bit, for much longer than Andy Warhol’s promised fifteen minutes.

I wasn’t bored. At night I could watch the city lights and gaze at the stars.

Juris Zvirgzdiņš has written more than twenty books for children. His works have received many awards, and have been translated into several languages.. His children’s book Muffa: Story of the White Baby Rhinoceros was included in the prestigious White Ravens Catalogue in 2012 in Bologna.

Mārta Ziemelis is a translator and poet, who was born in Germany and grew up there and in the Middle East. She translates from Latvian, French and Italian to English. Her poetry was first published in the literary journals UC Review and Garm Lu. Her first novel-length translation, The Water of Life by Daniel Marchildon, was published by Odyssey Books in July 2015.