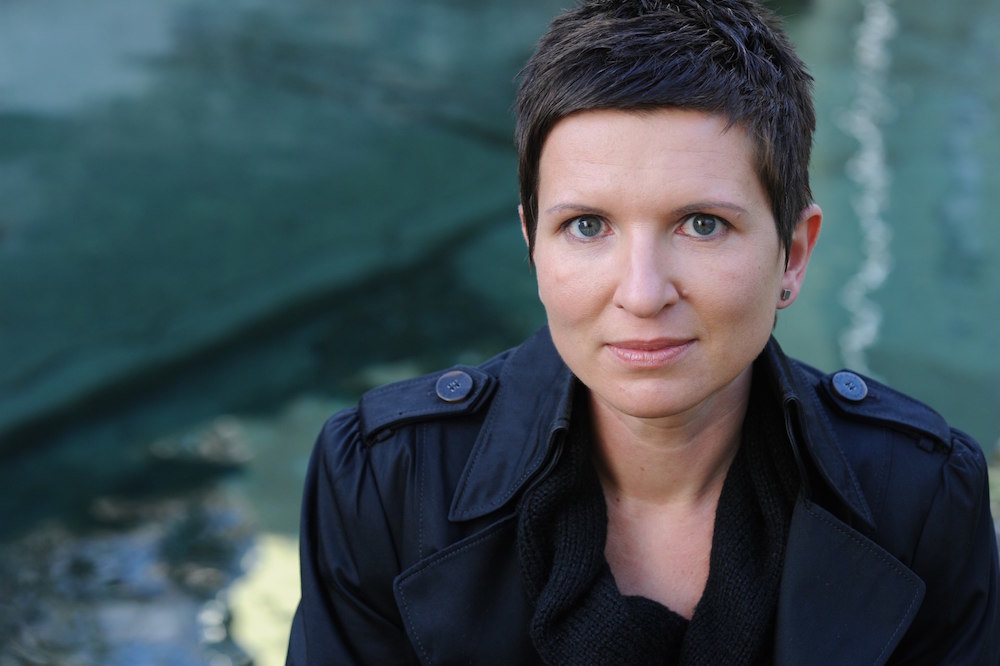 Chapter 2: Under the Eiderdown

Maja pushes herself away from the door frame and takes a step towards her aunt.

“Has it arrived?” asks Maja.

Her aunt dries her wet hands, takes her cardigan from the hook and puts it on, first the right arm, then the left – always the right arm first – before rolling the sleeves up and turning back to the sink. Maja stands to the side and watches her aunt take a dishcloth and start to dry the dishes. The delicate Sunday service, white porcelain with a light-blue pattern, the freshly dried plates and cups go undermost in the cupboard. Maja then stands on a chair and her aunt lifts four plates, Maja inserting two plates together underneath the stack in the cupboard so that all dishes get used in turn, as her aunt had taught her. The cups she can manage herself. Her aunt has already put the glasses away. Then come the knives and forks.

Watch out, that knife is sharp, says her aunt, as usual. Maja takes it by the handle, carefully dries the blade and, when her aunt isn’t looking, cautiously runs her finger along the knife edge before putting it in the kitchen drawer. The heavy pans are the only things she’s afraid of. She needs both hands to carry them to the table, drying first the inside and then turning them over and drying the bottoms and handles. She leaves them on the table for her aunt to hang on the hooks. The noise they make as they clang against the thick stone wall breaks the silence. Meals are eaten without talking, and when washing up care has to be taken so that nothing gets chipped. Talking is a distraction. People talk too much anyway, says her aunt. Maja hangs the dishcloth over the back of the chair to dry. Her aunt pulls down the sleeves of her cardigan and rubs her reddened hands together.

“Has it arrived?” asks Maja again, and her aunt looks at her briefly and shakes her head. It’s Sunday and there’s no post on Sundays and nothing will come now anyway. Easter was three weeks ago. Her aunt shoos Maja out of the kitchen, opens the small window and pulls the door closed behind her.

By Carolina Schutti
Translated from the German by Nick Somers

Carolina Schutti is one of 3 EUPL winners who will be guests of the second Euro Stars event on 21 September 2015 at Free Word Centre London.

Carolina Schutti was born in 1976 in Innsbruck, where she still lives. She studied German philology, English and American Studies, concert guitar and classical voice. After several years of teaching and following her PhD on Elias Canetti, she taught at the University of Florence, followed by a post as a research assistant at Literaturhaus am Inn. From 2009-2013 she was a board member of Brenner Forum in Innsbruck as well as a member of the board of trustees of Brenner-Archiv. Her publications include essays on literary studies, literary reviews and other texts in literary magazines. She coordinates and moderates literary events and interdisciplinary projects, works as a juror, gives lectures on poetry and holds training seminars in the field of Neue Literatur. Schutti has received a number of awards for her literary work.

Nick Somers was born in 1949 in Liverpool and went to school there. Afterwards he studied American History at Sussex University and finally moved to Germany in 1976, where he taught English – in between travelling extensively. After moving on to work for a translation agency for six years, he went freelance in 1988. In 1990 he moved with his wife to Vienna, Austria, where they have lived since. Over the years in Vienna, apart from working for international organisations (UN, IAEA, OSCE), he has established himself as a specialist in general culture and history, translating catalogues and exhibition texts for museums (Jewish Museum, Belvedere, Wien Museum, Mozarthaus and others) and for the tourist infrastructure. It was through this that he moved, in 2009, into the book world. Selection of translated titles: Sigmund Freud / Anna Freud, ‘Correspondence 1904-1938’, 2013; Hans-Joachim Neumann / Henrik Eberle, ‘Was Hitler Ill?’, 2013; Uta Gerhardt / Thomas Karlauf (eds.), ‘The Night of Broken Glass – Eyewitness Accounts of Kristallnacht’, 2012; Doron Rabinovici, ‘Eichmann’s Jews – The Jewish Administration of Holocaust Vienna 1938-1945’, 2011. You can contact Nick on: nsomers@aon.at.