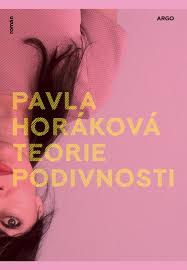 From A THEORY OF STRANGENESS by Pavla Horáková, translated by Lucie Mikolajková

I looked around the century-old buildings I’d passed on my way to work countless times before. Nearly black at the bottom and getting progressively lighter with each additional storey, their facades were indisputable proof that noxious fumes keep close to the ground. I held my breath subconsciously. For years now, this street, as well as the surrounding ones, had been almost completely void of any permanent inhabitants. The stores on the ground floor either stood empty or changed dodgy tenants faster than a chameleon changes colours. Not a stick of greenery within sight; just grime and more grime. And amidst all that, the Institute for Interdisciplinary Human Research.

The traffic lights started clicking frantically and turned green. I crossed the street toward the metal front door – a relic of the 1970s that clashed with the neo-Renaissance frontage. The closer I got the more I felt repelled by it. After ten years of spending every working day in this place, sometimes even weekends and vacations, I had developed a deep aversion to the building and everything it stood for. It was by this front door that my disgust manifested itself most. It would have been much more appropriate in a communist-era prefab high-rise, with an aluminum handle and a grimy pane of wire mesh glass. Over the years, my hand must have pressed a dent into the metal.

I breathed in the last gulp of foul air from the street and entered the darkened hallway. The smell inside had not changed for years: a mixture of the smog outside, mustiness, damp, cigarette smoke permeating the porter’s cubicle (the non-smoking rule was generally disregarded, if there even was one), and instant coffee. Only the grainy, flickering, monochrome screen of the ancient portable television had been replaced by the steadier glow of a newer model.

Like every morning, I greeted the porter, Mr Kožnar, also known around here as Hook because he only had one arm. He had been a porter here as long as anyone in the institute could remember. Under his tenure, the institute had had ten different directors, changed its name five times, and had been closed down and re-established twice, depending on the prevailing political climate.

The institute’s librarian, Valerie Hauserová, was another constant. Looking at her, few would realize that the mousy sixty-something in a white nylon lab coat was actually the most educated and highest-qualified person within these walls. In fact, she once used to be the head of the institute. But then, just before the end of her tenure, she resigned, completely out of the blue. She terminated all of her research, shredded all her files, and moved both her few remaining possessions and her humble self to a tiny office with a much worse view and furnishings than her previous one.

It turned out she had resigned for personal reasons. Her son, an only child and a very precocious young man, had been declared missing shortly before that. He had never been found. She never said a word about it, and after a few failed attempts to coax it out of her, people stopped asking. She always arrived first, long before seven, and locked up the library precisely at three o’clock in the afternoon. The rest of the employees routinely grumbled about these opening hours, which tended not to overlap with their usual work schedule, but no amount of complaining had yet managed to change the situation. Sometimes I stopped by, usually when I didn’t feel motivated enough to work.

‘Would you like some green tea?’ she called with her raspy smoker’s voice when she saw me in the doorway. ‘The water’s still hot.’

I was baffled. I’d never seen Valerie eat or drink anything even approaching a healthy diet. She was deeply resentful toward all sorts of new-fangled stuff. She usually went through several strong Turkish coffees a day, an awful swill made of cheap ground coffee and boiling water with the dregs left in the cup – plus two lumps of sugar. She noticed my surprise and pointed to a steaming glass full of some deep green liquid.

‘A shot of peppermint liqueur with hot water. I think I might be coming down with something,’ she explained. ‘Don’t tell me you’ve never tried it, Ada.’

Knowing Valerie, I was pretty sure she’d just made up the recipe. Then I realised that besides breakfast, I’d also skipped brushing my teeth. Hot water with peppermint liqueur might actually work better than toothpaste.

‘Would you like some sugar with that?’ Valerie asked. I shook my head. ‘I’m going out for a quick fag. You can go with me if you want,’ she offered.

The bleak librarian’s office opened onto a terrace right next to the library. The terrace overlooked the street, which was certainly not a pleasant view, but for a heavy smoker of Valerie’s caliber it was a real blessing.

We sat at a dusty table and warmed our hands on glasses of the venomous-looking beverage. Long lines of vehicles trailed below us, spurred onward by the changing stoplights: the peristaltic movement of traffic. The cars moved in long strips, each movement propelling them from one traffic light to the next and stopping again. And again. The foul fumes produced by the vehicles lent even more support to the intestinal analogy. Inhaling and releasing additional smoke of one’s own volition seemed almost wasteful. Or perhaps it was the other way around: surrounded by all this hopeless pollution, did inhaling a few more carcinogenic substances really matter?

‘Any news on Robert?’ Valerie asked after a moment.

‘No news is good news, I guess,’ she said. Then she fell silent again.

From A Theory of Strangeness

Pavla Horáková was born in the Czech city of Pilsen in 1974 and is a Czech radio presenter, author and translator. She is the author of seven published works of prose and translator of among others, Kurt Vonnegut and Iain Banks. Her most recent novel, Theory of Strangeness won her the Czech Magnesia Litera Prize for prose in 2019.

Lucie Mikolajkova is a Czech-born translator, editor and proofreader. She has translated over 30 works of English, American and Canadian literature, including such authors as Angela Carter and Jonathan Franzen. She also translates Czech fiction, poetry and film scripts into English.