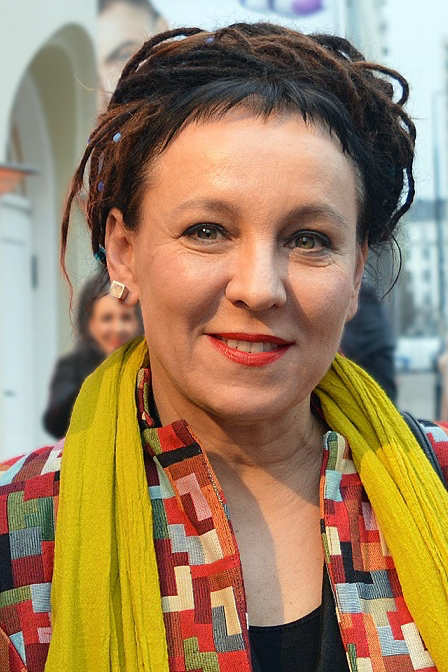 What a happy few weeks of literary prizes we’ve just had. Three of my favourite women and finest writers have graced us with their smiles and generosity: Olga Tokarczuk who won the Nobel Prize for Literature and the joint Booker Prize winners Margaret Atwood and Bernardine Evaristo. Their work is thrilling and important. I can proudly say that I have long been a supporter of their genius – as I know so many of you have too – and I have had the pleasure of interviewing them several times. I’d also like to congratulate two of my favourite male writers, who I also talent-spotted early on: Saša Stanišić, the Bosnian-German author, who has just won the German Book Prize and Norwegian Karl Ove Knausgaard, nominated as the 2020 author for the Future Library, a project close to my heart. These were announced at Frankfurt Book Fair – I’ve just returned – where all these authors and their translators were joyfully celebrated. Peter Handke, the second Nobel Prize winner, on the other hand, was not. I studied his work at university – he’s a great writer but his support of the Yugoslav Old Guard is shameful.

We’ll be celebrating some true German Greats on 26th November when we launch The German Riveter (with a cover design by Axel Scheffler) at the British Library. WE HAVE GREAT NEWS – EVEN THOUGH THE EVENT HAD SOLD OUT, DUE TO POPULAR DEMAND, THE BRITISH LIBRARY HAS PROVIDED A BIGGER VENUE AND PUT MORE TICKETS ON SALE – SO SPREAD THE WORD AND BUY YOUR TICKETS NOW! Don’t faint when I tell you that all the following are participating: Durs Grunbein, Julia Franck, Nino Haratischvili and translators Charlotte Collins, Ruth Martin and Karen Leeder. We are blessed. There’ll be readings and discussion of German literature and translation over the past thirty years since the fall of The Berlin Wall – the subject of The German Riveter itself. We will also film the event and interviews with the authors. You’ll be able to access these films via our YouTube channel.The Riveter magazine itself will be available free in print and online. On the 28th November there is a second event with Nino Haratischvili, Charlotte Collins, Ruth Martin and me – and chocolate and a Georgian choir! – at the Goethe-Institut London, book here.

Thank you to all of you who contributed to the excellent Czech and Slovak Riveting Reviews, now up and running here on our website. Thank you especially to Julia Sherwood and Mike Tate for curating the selection and to West Camel for editing. Our November and December online reviews will ofcourse be dedicated to German literature and The German Riveter, therefore no general reviews until January 2020. Do get in touch with our Editor West Camel if you’d like to review: west@westcamel.net.

One of the other magazines I help support and edit is the annual Swiss writing/publishing/translation ‘bible’ 12 Swiss Books, produced by Pro Helvetia in Zurich. It has just been published in print and online.Feel free to contact us about Swiss literature in the UK, and with any general inquiries regarding European Literature in the UK via contact@eurolitnetwork.com. Anna, Alyson, West, Nikki and I are here to help – although do be patient with us as we currently have no ELNet funding – we are running ELNet as best we can and applying for grants. Wish us luck.

See you in December for our next big networking meeting and for Brexit-free Christmas cheer from 1800-2030 at the Goethe-Institut London, 9thDecember. For members of the Literally Swiss group we will be meeting from 1500-1700 on the afternoon of 9th December at the Swiss Embassy. Registration for both is essential – with Anna contact@eurolitnetwork.com.

Photo of Olga Tokarczuk by Fryta73/Wikipedia