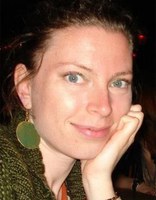 Zsófia Bán is both a trespasser of cultural-geographical boundaries and a builder of bridges―between continents, races, genders and languages. As an associate professor of American literature at Eötvös Loránd University in Budapest, she is also an author of two short story collections and several essay volumes. After a childhood spent in Rio de Janeiro, her family moved back to Hungary in 1969. Brought up with her parents’ oppressive silence about their survival of the Holocaust, Zsófia Bán devotes her fiction to speaking the unspeakable. She is an openly feminist, gay and Jewish writer who boldly goes against all forms of intimidation, ignorance and aggression. With her style incomparable to any other contemporary Hungarian female writer, Bán’s work might be linked to the theoretical and literary informedness of such British writer-academics as A. S. Byatt, Patricia Duncker or Sarah Waters―even though she herself has named Imre Kertész, Péter Nádas, Jeanette Winterson, Bruce Chatwin and W.G. Sebald as major sources of inspiration. Her two collections of short stories published so far, Evening School: A Reader for Adults (2007; German and Spanish editions: 2012, 2015) and When There Were Only Animals (2012, in German: 2014) feature all her characteristic topics such as travelling, visuality, remembering, trauma, gender roles and intertextuality.

The spatial-cultural experience of diversity and in-betweennes have been formative elements of her fictional world. Zsófia Bán identifies South America as the place she feels most at home; however, from the age of twelve she has also received an imprinting in Socialist Hungary. Her perspective of Central and Eastern European reality is thus simultaneously of a foreigner and an insider, resulting a gripping multiplicity of approaches. In an interview the author has described her multicultural upbringing in the following way: “[g]rowing up with three languages at the same time is a little bit like living in a house with many rooms, all opening into each other, where all the rooms are furnished in a carnevalistic fashion in different ways, with pieces of furniture and pictures in various styles and moods; and still, the whole thing feels familiar somehow”(Szombat).When the reader sets out on the journeys Zsófia Bán’s short stories offer, a similarly rich maze of meanings opens up in terms of historical time and cultural space. Ultimately, her unique textual universe makes the reader challenge and redraw their own boundaries of self/other, present/past, home/distance. Bán’s capturing of somatic impressions and sensual memory play a crucial role in recollecting often painful cultural memory and personal herstories―most of her protagonists are women torn between two parallel lives.

The debut volume, Evening School, disguises these topics as a textbook, structured along the logic of school subjects such as chemistry, French, history, geography, and even P.E. By featuring iconic artists as Goethe, Flaubert, Frida Kahlo or Manet, Bán subversively rewrites these canonized artworks. Its playful, postmodern bricolage-like language has been praised for being “dotted with neologisms as well as sentences in English, French, and Spanish; intentionally left untranslated, these pervade the text like foreign bodies” (Berliner Künstlerprogramm).One of the collection’s most memorable pieces is “Night Zoo,” which also became the title story of a landmark feminist anthology of Hungarian women’s writing. The tangibility of the environment is also there to be found in “Expulsion to Paradise,” a sensually loaded catalogue of a woman’s revisiting a (to her)long lost tropical city, penetrated by “the smell of rotting time”. Foreigness shows its Continental face in “The Two Fridas (School at the Frontier)” which intermingles Frida Kahlo’s famous painting with the experience of a girl and her “double” who have just arrived to a Hungarian school in 1969, having to face all the political and social absurdities of the era. The nostalgic experience of a home buried in the past is also described by the narrator of “Voyager Disc (I’ve more or less grown up here)”―a piece not included in either of Bán’s volumes despite its powerful representation of a middle-aged male astronomer returning to the scene of his South-American childhood. He drunkenly describes his sense of dislocation to a dumbfounded waitress, explaining how back in Europe “he has learnt the codes of behaviour and thinking but only like a replica with a programme installed. He couldn’t even be sure whether his memories were actually his or were those just also programmed, accompanied by letters, photographs and other things to have material proof, too. As far as he was concerned, he could easily be an embodiment of an alien form of life, programmed to carry out this impossible task, to investigate after himself all the time”.

The experience of foreigness is also central to When There Were Only Animals, but instead of school subjects, this volume includes snapshots of seemingly unrelated life stories, bound together by the agony of absence and loss. Travelling becomes a metaphor of the abyss between self and other: South America functions as the geographical trope of disturbing foreignness, while Budapest appears as the lost and found, alienating home. The story entitled “Poison,” for instance, seems to be the twin narrative of “Night Zoo.” Set somewhere in South-America, its protagonist is Katalin Karády (a celebrated, femme fatale-like Hungarian movie actress of the 1940s), who lives there as an immigrant and visits a zoo of snakes. In this archetypal garden she witnesses a female specimen moulting, symbolizing the necessary re-invention of the emigrated self. Zsófia Bán thus discovers a new continent for Hungarian and women’s literature, and by this one can also mean areterritorialization of the “Dark Continent” as the Freudian metaphor of female sexuality. “Keep in Touch” is also set in South-America and reflects on the role of the cultural mediator. The narrator, born in Brazil, strongly denies a tourist identity and only decides to climb the Sugarloaf Mountain twenty-seven years later. Memory and representation appear in When There Were Only Animals as private but still culturally embedded affective mechanisms showing up the psychological complexity of crossing boundaries, both intercontinental and -subjective.

Besides travelling, the various media and rituals of remembering become the mastertropes of Bán’s volumes. The short stories of the second book vaguely outline the 20th century history of a Central European family, elegantly avoiding any delimiting chronological or historical points of reference. Lurking behind the plot of “Three Attempts at Bartók” we find the alienation and existential vacuum of the emigré. The short story is a series of flashbacks of a middle-aged woman, a gifted and renowned musician returning to Budapest after decades who got stuck in a traumatic “present continuous” and still cannot come to terms with what she left behind. The culture shock of homecoming is also a key theme of “The Museum of Things,” where the temporal and geographical distance between present and past selves is again excruciatingly obvious. This is also the story of a middle-aged woman, who, during a flight, accidentally meets the man who sexually abused her as a child in a distant, exotic country. By the uncannily vivid recollection of the child’s bodily impressions, the text captures the irreversible damage they have caused. The title story, “When There Were Only Animals,” provides an overwhelming closure for the volume, taking the notions of geographical and emotional distance to their farthest point. Set on the Antarctica, the “polar” opposite of the lush South American climate, the story depicts a young female biologist’s mourning for her dead mother.When protagonist is trapped in a devastating storm called white-out she suddenly manages to take the perfect photo expressing her pain: she “took the picture which could eventually reflect the stupefying but still calm and diverging whiteness of that moment a year before in the hospital, when the colours, the smells, the sounds and space all disappeared, and with them everything else also fell back into that single, strangely familiar temporal plane when there were only animals” (212).

In her intercultural and -textual journeys between South America and Budapest, Zsófia Bán never approaches her topic with the hybris of the conquistador but rather as a cultural translator. Her short stories pose the question of the narratability of liminal mental and geographical spaces, where memory work and the work of mourning, emigration and estrangement all contribute to the illusory continuity of our divided selves.

Ureczky, Eszter. “Út, level, képek.” (A review of When There Were Only Animals.) Műút. 2012.
http://www.muut.hu/korabbilapszamok/034/ureczky.html

This blog was originally published on ELit Literature House Europe website on 8 September 2016.