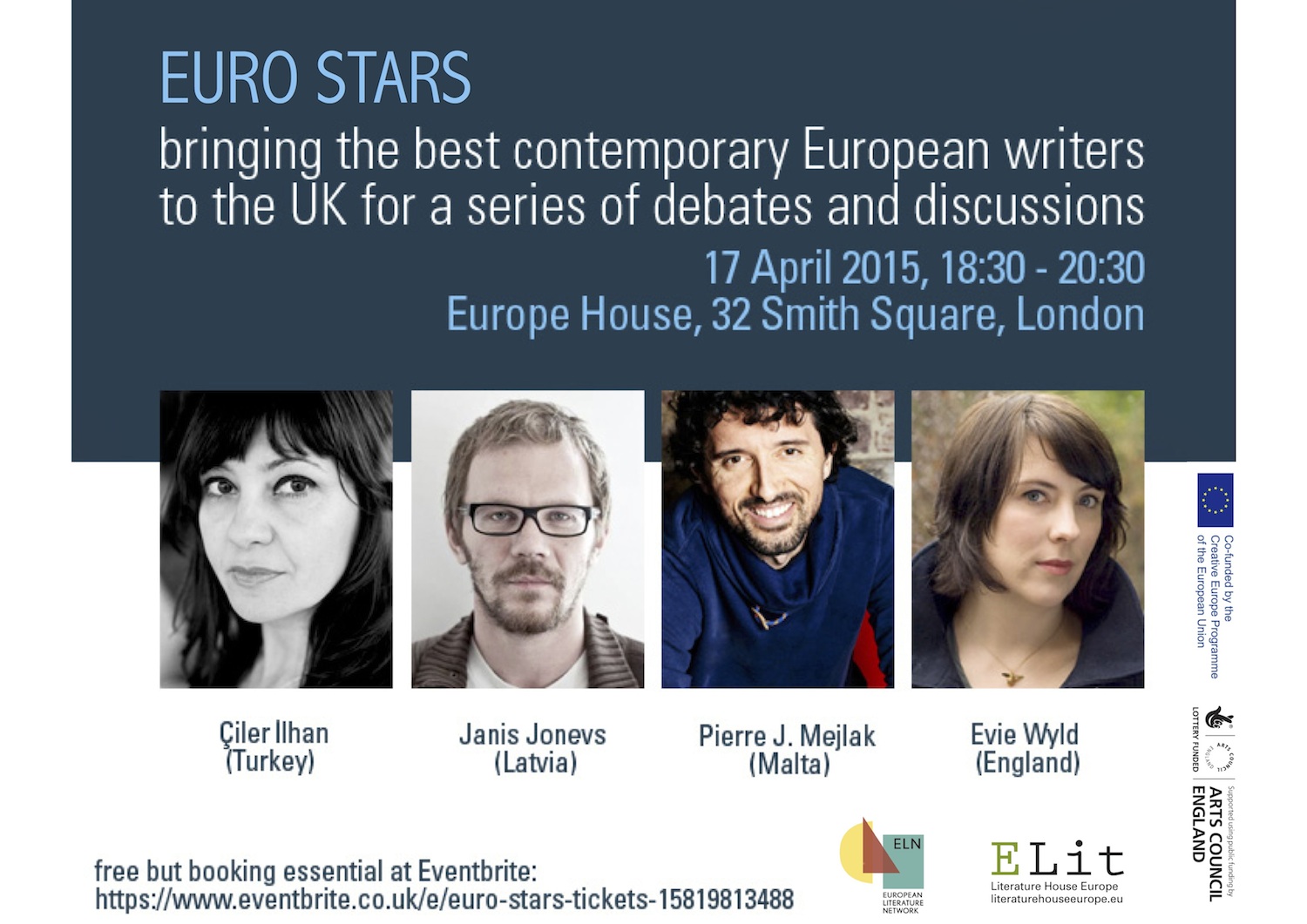 I do like a challenge. After all, I promote European literature in the UK! And we’ve got 3 big European ‘challenges’ coming up: the annual ‘European Literature Night’ at the British Library on Wednesday May 13th, and on Friday April 17th at Europe House in London our first ever ‘Euro Stars’ event, to present four ‘European Union Prize for Literature’ (EUPL) winners to the British public. And the third event? The UK Elections on May 7th of course, where ‘Europe’ is a central issue. I’m not making a party political point here at all; I don’t work for the EU (I am an independent journalist) so my vote is simply for greater acceptance of European culture in the UK. Organising any European event in eurosceptical UK is indeed a ‘challenge’.

The idea behind ‘Euro Stars’ is ambitious: to treat these writers as the rock stars of European Literature that they really are, not as the warm-up band or wallflowers wilting next to the big Anglo-American sunflowers. We’ll be reporting on the actual event after it happens (here on the ELIT site and on our brand new European Literature Network website too!). As the curator and chair of ‘Euro Stars’ ofcourse my selection of star writers is gloriously subjective. I chose them because all four are great speakers so we are guaranteed some lively debate and performances, but most importantly they are original and gifted writers. In another shamelessly subjective move I also decided to focus this first event on the European short story. On September 21st , at our second Euro Star event, I’ll focus on the European novel but I love the short story and deplore the fact that we don’t publish them enough in this country – although there’s much greater and growing interest. The short story is popular across the Channel too, as those of us who follow European fiction know, so this is our chance to boost the genre in the UK and to link up with other initiatives. My alma mater BBC Radio 4 already runs an important short story competition, as does Commonwealth Writers and there are several independent publishers devoted to international short fiction, such as Dalkey Archive Press’s annual Best European Fiction anthology, Peirene Press and Comma Press.

(See the end of this blog for website links to all these publishers, organisations and events.)

This is my Euro Stars ‘election manifesto’ – and you can hold me to it (unlike most politicians):

*EURO STARS* is a bright new look at European literature through its stars – the writers!
*EURO STARS* brings the best contemporary writers from across Europe to the UK for a series of lively readings and debates.
*EURO STARS* is a new way of presenting European literature in English in public.
We believe in great fiction, great translation, great performances and honest discussion about writing and the culture and continent it comes from.
We believe in great social events and fun networking (with refreshments!)
We love to hear readings in the original language. We also support our great translators by projecting the English extracts on screen – and commission translations where they don’t exist.
We will publish translations and useful links on our new website which we are launching on 17th April to help boost *EURO STAR* readers and writers everywhere.

*EURO STARS* is brought to you by the European Literature Network & ELIT Literature House Europe, with funding from Creative Europe and Arts Council England. We are also grateful for the support of the EUPL European Union Prize for Literature & Istros Books.

So there you have it! Not a party political manifesto but a straight vote for the EURO STARS!

OUR CONTACTS & USEFUL WEBSITES
Rosie Goldsmith & Anna Blasiak
eurolitnet@gmail.com
www.facebook.com/EuroLitNetwork
And look out for the launch of our new European Literature Network website on 17th April

2. 13th May EUROPEAN LITERATURE NIGHT at the British Library, London