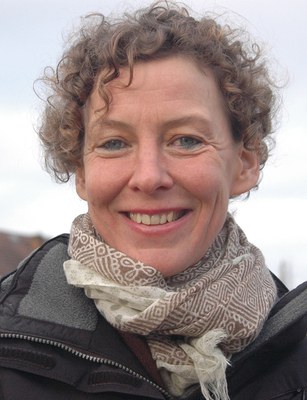 ELit Europa after Corona: THE BARREL ORGAN by Katharina Hacker

The Barrel Organ
by Katharina Hacker

I spend the days in the village in Brandenburg where I usually spend most of the time. It’s not far from Berlin. It’s a large village, it’s not idyllic. Sometimes I regret that. In recent weeks I was grateful for the building site at the school directly opposite us; they need an extension, there are so many children, not all of them fit in, so a bright building will be added.
My desk stands in front of the windows facing the street. In the morning, the builders go past on the way to the old “Konsum” supermarket, now a grocery shop. Only two are allowed in at a time. Some of the builders speak Polish, another speaks German.
The heavy machines make our old building tremble and my desk does too.
From time to time I read newspapers much too often.

Here in the village a few days ago, in the evening, just after six o’clock after the evening peals of the church bells fell silent, I heard music, slightly chirping almost, not very loud.
And as I listened, I remembered that a man – several houses further along – had once said he was driving with his wife to Berlin for the international convention of barrel organists.
That’s a barrel organ, I thought.
The next day again, so I walked to take a look.
The man was standing there outside the front door and playing barrel organ. A toy monkey on the right. Handle. Organ-grinding for a quarter of an hour.
Today, my husband went with one daughter.
I sat in the courtyard, listening to the barrel organ and a woman’s voice.
Then our daughter was allowed to play the organ.
She played In the Mood.

Right across Europe at six o’clock in the evening or after the evening bells stop pealing, organ grinders play outside the door, in some places in front of care homes, too.
The organ grinders who meet once a year in Berlin and walk along the Ku’damm.
They play and share it on Facebook. They play in Europe and one even played in Mexico, We organ-grind against the Corona monster.
Music that was always played on the  street. Earning a pittance before. But a joy for the public, perhaps at the market. Or in front of the house or in the back courtyard.

Cheerful music as well as melancholy. Touching your heart, you have to grind steadily, not too slow, not too quick.
It takes strength. It needs stamina.
Previously there were pinned barrels with the songs, for a good hundred years holes on punched paper tape.

Go to the window or out of the front door and listen. Perhaps you’re lucky and someone is playing nearby.

Will everything change?
It didn’t happen before, organ grinders standing in front of the building every evening to cheer up the neighbours!
I don’t know, if everything is changing, but I don’t think so.
I’m all the more certain that every day something could change for the better: more loyalty towards society. Towards the state that we are. Towards Europe that we are too. More loyalty towards people who need a cheerful word, money, momentum and solidarity.
There is so much talk of exponential infection: for the better, that’s also possible. How about we no longer tolerate disrespect, contempt in the public space? How about we become activists and fight for us all depending on social goodwill?
How about us no longer blurting out discontent and mistrust, but using this as an occasion to test things precisely? Making suggestions? Raising our voice, but not to vent our frustration and instead to make a contribution to the community?

Every day, something could change.
I’m convinced that no societal life is possible without trusting in mutual goodwill. And I’m convinced that respect is indivisible: a bitter disappointment that people could look down on some creatures, though respecting others.
Almost all those whom I talk to at least share the former opinion, regardless of all other differences.
We are, I then think, so many who are safe, goodwill and trust are the most precious things in a society. If we commit to this unequivocally, if everybody only infects one or two others with this thought, then there are enough of us. There is, I believe, something that in medieval days was called appetitus boni. In one country, in another, in Europe, to begin this where we regard ourselves as a community.
I don’t mean that everyone is thrown back on his own resources to discover their humanitarianism. Rather, rules and compromise and a clear standard for handling personal behaviour, i.e. what one considers right, and accepting this as a yardstick for one’s own behaviour. Not mood and not sentiment, certainly not fatigue and discontent, at the very least one’s own egotism.
Regardless of our social and economic position, of our successes and failures.
It’s time for us clearly and irrefutably to say what we stand for.

This blog was originally published on ELit Literature House Europe website on 20 May 2020.