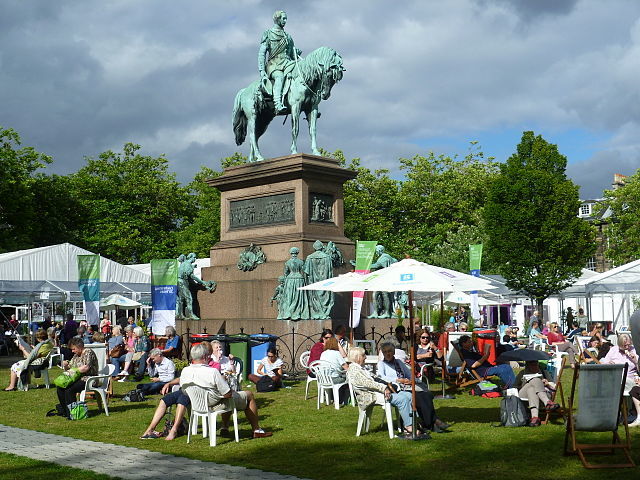 In a world where the migration of people, whether through economic, social or political causes, whether voluntary or enforced, captures our attention on a daily basis, the Edinburgh International Book Festival makes time to look behind the headlines. The Book Festival’s 2015 programme takes a voyage of discovery to every continent on earth to see how this flow of humanity, and the stories that come with and result from it, shapes our lives, our opinions and our identities. In its most international programme to date, the Book Festival welcomes voices from over 55 countries writing in a multitude of languages, many of whom are translated into English for the first time.

Nick Barley, Director of the Edinburgh International Book Festival, said “Scotland has always been an outward-looking nation and this year the Book Festival is more international than ever before. Charlotte Square Gardens will reflect the idea of the Global Village as we welcome authors from across the planet. Whether they are from Nigeria or North Korea; Colombia or China, these are writers whose stories shed light not only on the big changes in world power, but on the shifting nature of local cultures– changes that are also taking place in Scotland.”

Some literary megastars in their own countries make the trip to Edinburgh this August including Spain’s Jaume Cabré whose ‘Confessions’ has sold over 1 million copies, Germany’s Jenny Erpenbeck who has just won the 2015 Independent Foreign Fiction Prize, the multi-award winning Helle Helle from Denmark, South Korea’s Han Kang, Alain Mabanckou from Congo and Salla Simukka, an exceptional new Young Adult author from Finland.

Marilynne Robinson, regarded as one of America’s greatest living writers, makes her first visit to Charlotte Square Gardens, as do French ‘rockstar’ mathematician Cédric Villani, renowned playwright David Hare, street artist Stik and one of the most formidable civil rights activists of the 20th century, the Reverend Jesse Jackson. Palestinian lawyer Raja Shehadeh launches ‘Shifting Sands’, a book of powerful and engaging essays on the Middle East which grew out of a series of discussions curated by Shehadeh at the 2014 Book Festival.

As well as introducing brand new writing from across the globe, the Trading Stories strand also examines how stories travel, bringing together writers and translators for an exploration of language, identity and the myriad of international influences that have inspired and defined Scottish writing. Marina Warner asks how fairy stories shed light on human understanding as they travel from continent to continent, Daniel Hahn, one of the world’s foremost translators, examines the creative, linguistic and political challenges required to take stories across borders. Many of the popular Reading Workshops have been inspired to focus on translated classics, such as ‘Madame Bovary’ and ‘Anna Karenina’. Trading Stories is supported by the Scottish Government’s Edinburgh Festivals Expo Fund.

Cabinet Secretary for Culture, Europe and External Affairs Fiona Hyslop said, “As well as another fantastic line up of top writers, this year the Edinburgh International Book Festival is highlighting one of today’s most important subjects, internationalism. For centuries, great writers have opened our minds to novel worlds and lands. Through understanding others we embrace new ideas and expand our imagination, both are vital for a country looking to succeed on the world stage. Scots have always embraced internationalism. Our intangible cultural heritage of storytelling, poetry and music transcends boundaries and we are proud to support Trading Stories, a key strand of the international theme, through the Edinburgh Festivals Expo Fund.”

There are five Guest Selectors who have curated strands in this year’s programme. Internationally renowned visual artist and Mexico’s single most important cultural figure, Gabriel Orozco, offers an Insider’s Guide to Mexico and speaks to seven formidable Mexican novelists, poets and writers in a sparkling reflection of their home literary scene. Lennie Goodings, publisher of the Virago imprint for over 30 years, presents the theme of The Female Gaze, offering a challenge to the masculine view of the world which still pervades Britain’s culture. With guests including Jane Gardam, Sarah Waters and Eileen Atkins, her events discuss ageing, extremism and lost classics.

Edinburgh’s own Ian Rankin has chosen to chat to some of his favourite writers and musicians and his guests include Hollywood A-Lister Alan Cumming, musicians Viv Albertine, Edwyn Collins and Stuart David, co-founder of Belle and Sebastian. Charlotte Higgins, the Guardian’s chief culture writer, looks at the complex interaction between globalisation and xenophobia and speaks to leading classicists alongside specialists in contemporary affairs. Finally across both the adult and children’s programmes Gill Arbuthnott, author of novels for young adults and picture books for pre-schoolers, highlights the need for us all to be science literate with guests including French physicist Christophe Galfard and Professor Robert Winston. Debi Gliori is the 2015 Illustrator in Residence.

The Book Festival continues to champion new talent and its annual First Book Award, now in its sixth year, features 55 debut novelists and short story writers. There are renowned international authors: Melinda Nadj Abonji from Switzerland, Nigeria’s Chigozie Obioma, and Ahmet Altan from Turkey among them; exceptional home-grown talent such as Melinda Salisbury, Kate Hamer, Mark Blacklock and Simon Sylvester, and those perhaps better known for their other careers including Colin MacIntyre, Helen Lederer, Celia Imrie and Jesse Armstrong. The winner of the First Book Award is voted for by readers and visitors to the Book Festival and announced in October.

Always exploring new ways of presenting literature, words and books, there is a strong performance element in the 2015 Festival. In a tribute to Seamus Heaney, a full length dramatic reading of his translation of ‘Beowulf’ takes place in a co-production with the Tron Theatre Company. The renowned Shakespearean and Wolf Hall actor Mark Rylance reads from Paul Kingsnorth‘s novel ‘The Wake’ and in a major collaboration with La Maison de la Poésie de Montreal and the Scottish Poetry Library, three leading writers from the First Nation Innu people of Northern Canada present a performance of their poems, stories and music in French and Inuktitut. The Babble On series of Spoken Word events includes appearances from Kate Tempest and George the Poet.

Terry Waite delivers The Frederick Hood Memorial Lecture, Matt Haig delivers The Siobhan Dowd Trust Memorial Lecture and the 2015 Bailey’s Prize winner Ali Smith The PEN / H G Wells Lecture. Past and present winners of the European Union Prize for Literature discuss the power of literature across languages, the winners of the James Tait Black Prizes are revealed and in celebration of the Man Booker International Prize, translators of László Krasznahorkai‘s work are joined by the Chair of the judges, Marina Warner, to discuss the 2015 winner.

The Edinburgh International Book Festival receives funding from Creative Scotland and the City of Edinburgh Council and this year welcomes over 900 participants from 55 different countries to Charlotte Square Gardens and runs from Saturday 15 to Monday 31 August 2015. Entrance to the Gardens is FREE. Full details of the programme can be found at www.edbookfest.co.uk. Tickets to all events go on sale at 8.30am on Tuesday 23 June 2015, online at www.edbookfest.co.uk, by phone on 0845 373 5888 or in person at the Box Office at the Roxburghe Hotel on George Street (on Tuesday 23 June only, thereafter at The Hub, Castlehill).